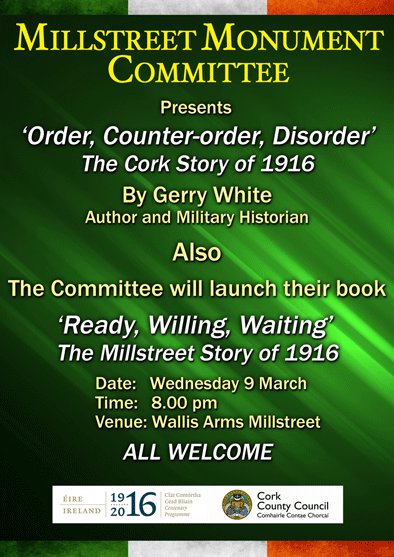 On the same night (8pm March 9th 2016) The Committee will launch their publication written by Noreen Meaney entitled ‘Ready Willing Waiting: Keale, Millstreet, Mushera, Millstreet Irish Volunteers 1916.’ The book tells the story of the formation of the four Companies of Irish Volunteers who mobilised on Easter Sunday 23 April 1916, their activities in Millstreet while the Rising continued in
Dublin and the consequences for their actions before and during the insurrection as some Irish Volunteers were arrested and imprisoned in Frongoch. While compiling this publication the Committee researched the identity of all the Volunteers and have listed their addresses which were not included in the Military Bureau Witness Statements when giving a written account for this 1916 period. For the first time all the Irish Volunteers from the Keale Company have been identified with accompanying addresses. The publication includes an interesting selection of documents relating to the four companies for this period plus photos of the Volunteers contributed by their families. We are delighted to have Conor Nelligan, Heritage Officer with Cork County Council launch our book. All are welcome on the night.