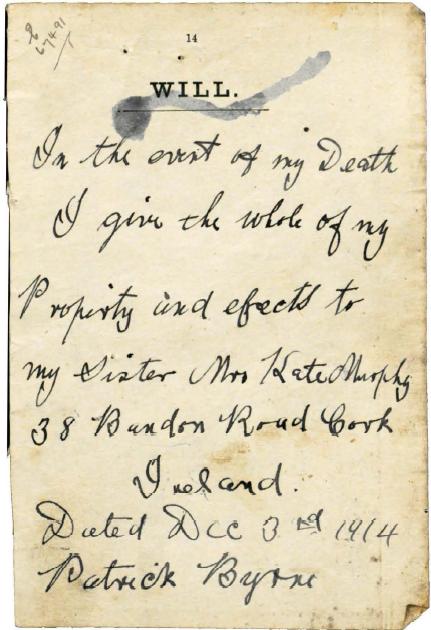 Patrick Byrne died on this day January 19th in 1915 in the Ypres area of Belgium from wounds received in action. He is commemorated at the Cite Bonjean Military Cemetery, Armentieres IX. A. 61.

He enlisted in Mallow in December 1914, and joined the Prince of Wales’s Leinster Regiment (Royal Canadians) – 2nd Battalion, Service no. 3563.

He had been born on 24th March 1882 in the Millstreet Union Workhouse to Joseph Byrne and Catherine (née Kelleher, and who married Callaghan after Joseph died).

—-
The below extract gives idea of what he and his regiment had to endure at that time in January 1915:
It was on the 12th of January 1915, that we relieved the Cameron Highlanders in the trenches round St.Eloi, a place with which the Battalion will be long and honourably associated. One company moved up to the famous mound. The way led through a morass which although some twenty yards wide required an hour to traverse, for we went up to our armpits in the frightful mud and some men had to be hauled through by man force by three or four comerades.

When the so-called trenches were reached it was found that the protection they afforded was slender and the comfort or habitability practically nil. There were no dug-outs. The parapet was not bullet proof. Lines of steel loopholes placed on the top and officially “concealed” by fallen saplings were perforated like sieves. There was no equipnment. Wh had exactly what we carried in marching order in peace time and nothing else. The trench was “wet” ie. the bottom was mud; water in the rear trench was above out knees in the extension about five feet deep. Rations were to come up from Voormezeele bet what with the mud and dirt the stew was uneatable and we had to recourse to our emergency rations. THe enemy was in a well built trench about 100 yards away with a sap some 30 yards to our left front. This was supposed to be a mine shaft, a theory which turned out to be correct.
The cold, the wet, the slime and filth of trench life in the Ypres salient in the early months of 1915 were such as to make an impression never to be obliterated from the minds of those who suffered and survived. The trenches were on the same level as great ponds in rear and were constantly flooded. The bottom was plain mud. The parapet oozed water which flowed down – a sticky mixture of earth and water in constant rivulets. Parados there was none. There was no getting out to stretch one’s legs on the ground in rear for that was commmanded by the close and accurate fire of the enemy. There was no possibility of movement in the trenches for those were barely three feet wide. There was nowhere to put down the rifle to keep it dry. Every rifle had to be held the whole 48 hour tour. Sleep was impossible; there was no provision for rest nor could any be made. The men simply stood motionless in water for two days and nights and on relief marched out, if they were then capable  of movement. No blankets were taken to the trenches, and the cooked rations wen they came up at night were usually uneatable. There was no boarding in the trenches of those days and for our first few spells we had no picks nor shovels nor sandbags nor material of any sort. This too at a time when the germans had such a superiority both in fire and in everything else including terrain as probably nover existed again during the war. We could see some of the back lines of the enemy made of masses of sandbags on which the German soldiers were working, clad in servicable canvas suits and carrying immense quantities of timber…. Those trenches round St.Eloi were probably the worst on the whole Western Front and their occupation was a severe trial to a battalion fresh from India.” 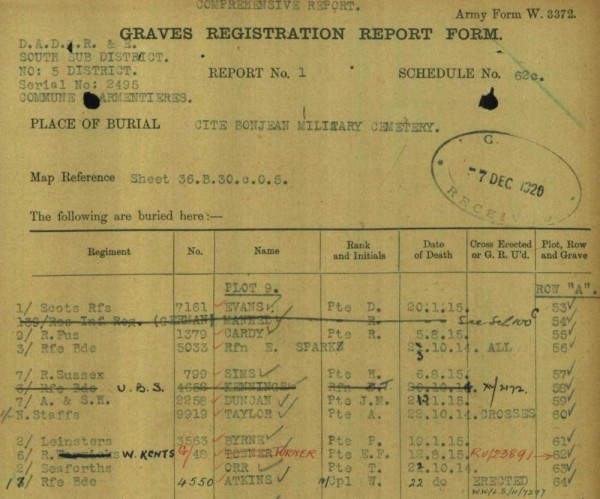 Map above shows the place of death and burial

TODO: There is a double entry for his birth in the registry (Patrick Kelleher / Patrick Byrne). check the actual books to see if this is correct 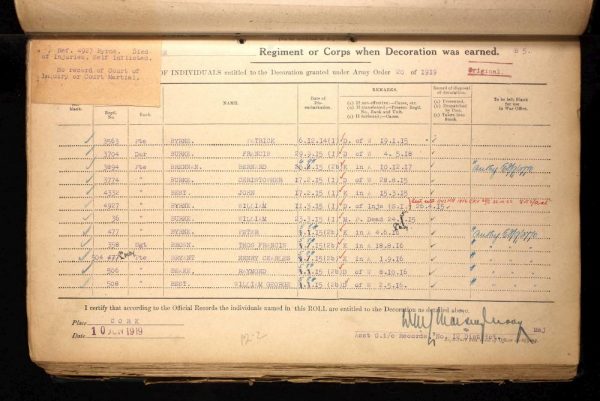 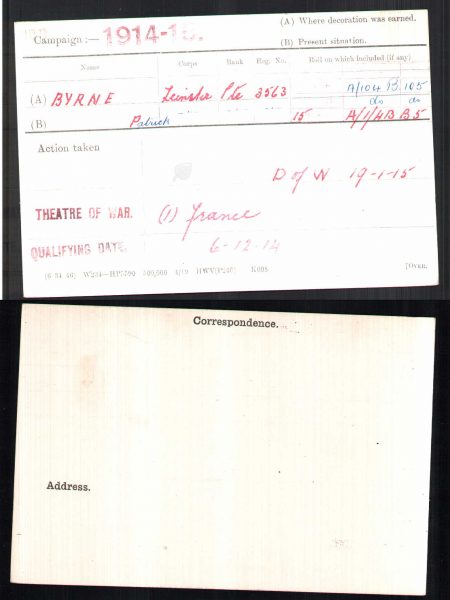