It was with a deep sense of shock that I just became aware of the very sad departure of Peadar Cremin (Adare and Tralee) to his Eternal Reward, R.I.P.. I firstly became acquainted with Peadar when as a First Year Student in St. Patrick’s Training College, Drumcondra in 1968 Peadar would have been a Second Year Student at that time. From the outset Peadar was such a true gentleman of the very highest calibre and has had such a totally inspiring influence on the education of Ireland especially during the many hugely significant developments in Primary Education since the 1970s.  As President of Mary Immaculate College in Limerick and as a member of the University of Limerick Governing Authority Peadar’s impact on the training of so many Primary Teachers over the years was enormous and hugely beneficial.  We shared a common interest in the world of Calligraphy but Peadar’s magnificent talent in such splendidly ornate handwriting far surpassed my attempt in this Art. Peadar’s interest in the Millstreet Parish area was heartfelt with of course Cullen as the centrepoint – the homeplace of Áine (née Fleming). Peadar truly enriched the lives of all of us who have been so privileged to have known him. Sincere condolences to Áine, their daughters, grandchildren and family. Ar dheis Dé go raibh a anam dílis.  (Seán Radley) 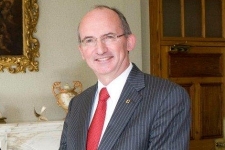 =======
To understand Peadar Cremin it is necessary to understand three things (developmenteducation.ie)