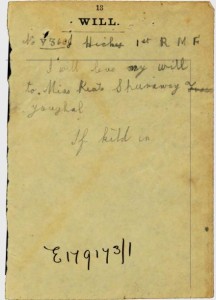 “There was little further action other than holding front lines from September through November, when the weather worsened. Late in the month gales swept over the peninsula, hundreds were drowned in the flooded trenches or from exposure or frostbite, followed on 28 November by a blizzard. The battalion was evacuated as it arrived, on the River Clyde sailing 2 January 1916 for Alexandria. From there it sailed with the rest of the 29th Division arriving in France on 22 March. Three years of warfare still remained for the battalion in France and Flanders on the Western Front. It had already suffered 45% of its total losses for the entire war, and numbered 24 officers and 287 men when disembarking.”

from the the Royal Munster Fusiliers wiki page

Cork Men at Galipoli – The outbreak of the First World War on August 4th, 1914 saw the 1st Battalion Royal Munster Fusiliers, a regular unit of the British Army, consisting of men from Cork, Limerick, Clare and Kerry, the recruiting counties for the regiment, stationed in Burma – (Avondhou Press 23rd April 2015)

“…my granduncle lance corporal Denis Hickey died at Gallipoli and…”

I don’t have the paper any longer, that’s all i can see from a google search. i wonder would it be possible to see the article, so that i could track down the grandnephew and dig a little deeper.

His brother John F. Hickey is buried at the Church Graveyard, West End, Millstreet [article to be published]

Many thanks to Jean Prendergast for the following addition (27th Nov): Denis Hickey, his Medal Index Card shows he arrived at Gallipoli on the 16th of August 1915 joining the 1st Munsters. In the Soldiers’ Wills series his effects are left to Miss Keate Spuraway, Youghal, Ireland. My ebook “BLOOD, FIRE & FLOOD: The 1st Royal Munster Fusiliers At Gallipoli 1915” covers this time. Also one of the Seanchas Duhallows cover three Hickey bros from Millstreet in WWI.

Denis’ medals were presented by his family to Millstreet Museum recently. See the article here: 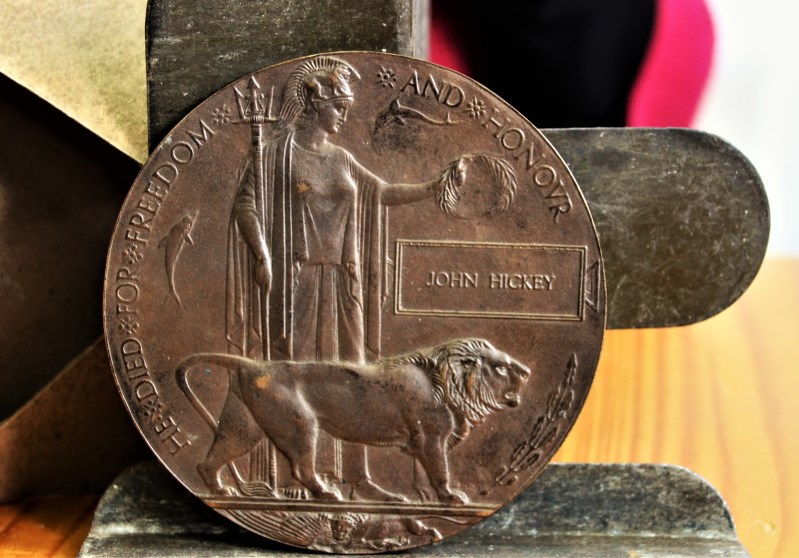 The Memorial Plaque was issued after the First World War to the next-of-kin of all British and Empire service personnel who were killed as a result of the war.The plaques (which could be described as large plaquettes) were made of bronze, and hence popularly known as the “Dead Man’s Penny”. [1] 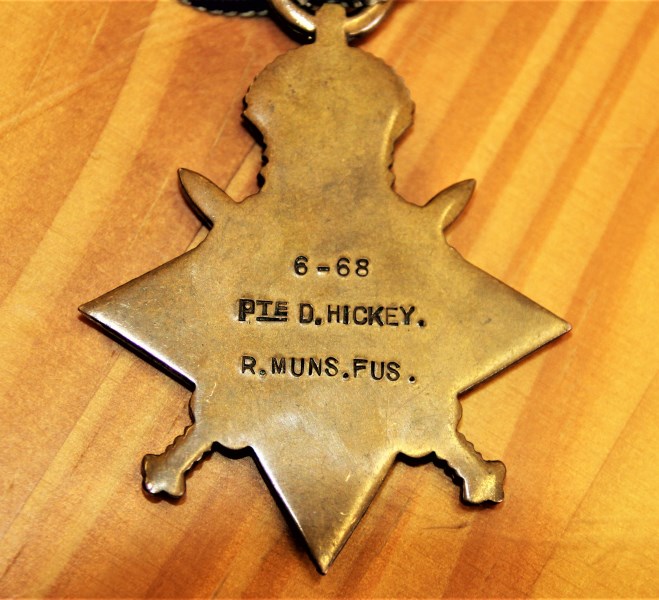 1914-15 Star : this bronze medal with a red, white and blue watered silk ribbon was awarded to those who served in any theatre of war between 5 August 1914 and 31st December 1915 (other than those who had already qualified for the 1914 Star.)    It is a crowned four-pointed star with crossed swords and a wreath of oak leaves with the royal cipher at the base and a scroll across the centre inscribed 1914-15. Total number of medals awarded = 2,350,000.

Also presented with the Medallion and the Star was a green  A.O.H Div No 755 Millstreet badge.