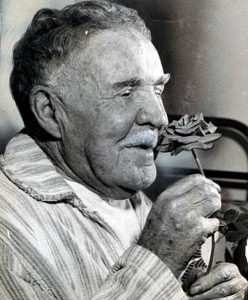 Known better as the Lavender Man, Anthony Barrett was well known in San Francisco as the blind man who for some 45 years sold small packets of lavender from a booth, outside the Emporium on Market Street, San Francisco, at one time, the largest shopping centre west of Chicago.
Anthony was born and raised in Tullig, Millstreet, and emigrated with his sister Catherine to the US in 1901. He found employment in the mines of Arizona, but an explosion there in 1905 saw him lose his sight. He went to San Francisco  for treatment but his sight was gone forever. Unemployed and desperate he bought some lavender, put it into simple paper wrappers, displayed them on a tray suspended on his shoulders and took a stand (in later years he sat) at the west entrance to the Emporium. There he was to remain—a living landmark.
He was quiet, well presented and made many friends there. He was helped by a family friend Liz O’Shea, who was originally of Minor Row in Millstreet, with whose family he lived with them for many years. With Liz, he returned to Millstreet for the summer of 1928.
He died on March 26th 1955, at Laguna Honda Hospital, aged 75. He had been sick for three years, and his presence was missed outside the Emporium. So well known was he that this photo of him appeared in the San Francisco Chronicle at the time of his death.

Mentions in Books, Newspapers and More

Unforgettable Characters: “For thousands of San Franciscans during nearly half a century the perfume of lavender was as much a part of the Christmas season’s aroma as the smell of popcorn and greenery. They caught whiffs of it deliciously scenting the air around the Emporium as they dashed back and forth along Market street on shopping expeditions. Countless numbers paused in their hectic pace to exchange holiday greetings with the pleasant man who sold it and to spend a dime or two for a couple of packets to take home. The vendor was Anthony Barrett, who had come to this country around the hinge of the century to seek his fortune and found employment in mines in Arizona. Tragedy struck in 1905. There was an explosion and Tony was blinded in the accident. He came here for treatment but his sight was gone forever. No one would hire the young man, and he was becoming desperate when he remembered that in his youth packages of the old-fashioned fragrance used to sell very well on the streets in England.
So he bought some lavender, put it into simple paper wrappers, displayed them on a tray suspended on his shoulders and took a stand (in later years he sat) at the west entrance to the Emporium. There he was to remain—a living landmark—for the next 45 years. Tony always was quiet. He didn’t hawk his wares or in any other way try to attract customers. Nevertheless, he managed to make a meagre living and a wealth of friends. Eventually the department store’s management built him a little shelter against the chill winds and damp fogs, and thus he became almost a part of that institution. One day in the early 1950’s Tony was missing. During a three-year illness he always was hopeful of returning to his post and fretted at the delay. But Tony died, aged 73, in the spring of 1955 at the Laguna Honda Home. With his death the city lost one of its best-known but gentlest characters, and the newspapers afforded him obituaries of a length usually reserved for bank presidents. No monument that might mark his grave in Holy Cross Cemetery could be more enduring or endearing than the nostalgic memory of the sweet scent of lavender he left behind.” — from Tales of Love and Hate in Old San Francisco  – “Unforgettable Characters” – pages 189-190

“… If you were working and downtown often do you remember the old blind man and his box of lavender sitting by the Emporium. You could smell the Lavender as you got off the streetcar … By the way the Lavender man’s packets of seeds never diminished. His cash box grew however by the generosity of the San Franciscans…” – Rosie on outsidelands.org

“Lastly, the Lavender Man – I can still smell that terrific odour.” – [outsidelands.org]

“Tony Barrett, who has been peddling his sweet-scented lavender in front of the Emporium for decades, will get his Big Night next Thursday, when a British movie titled “The Lavender Hill Mob” opens at the Bridge Theater; Tony the Lavender Man will be the guest of honor …” – January 21, 1952 – The San Francisco Examiner

“The Emporium is deep in the memory of San Franciscans old and new. Old-timers still recall a blind man named Anthony Barrett, who sold lavender in little packets from a stall on the sidewalk in front of the Emporium for 45 years, starting in 1910.” – S.F Chronicle 2015, 22 Dec 2015

The Emporium was the biggest department store west of Chicago, or so it claimed. There was a flower stand in front; even the street peddlers were genteel. By the main entrance, a blind man named Anthony Barrett sold lavender in little packets from 1910 until his death in 1955. San Francisco Chronicle – 24 Sep 2006

SO MANY MEMORIES: The Emporium is deep in the memory of San Franciscans old and new. Old-timers still recall a blind man named Anthony Barrett, who sold lavender in little packets from a stall on the sidewalk in front of the Emporium for 45 years, starting in 1910. SF Gate 1995

He may have travelled with Ellen Sheehan (25), also from Millstreet, whose listing is directly under his. She was going to NY.

Elizabeth O’Reilly was apparently Elizabeth Ann O’Shea of Minor Row in Millstreet. Birth notes says that she was born on Jan 5th 1892, but no birth / baptism records exist for that.

Anthony’s Grave (Find a Grave)
Anthony Barrett (-28 Mar 1955)
Holy Cross Catholic Cemetery, Colma, San Mateo County, California, USA
Plot: R2 4 g40
TODO: Is there a headstone, has anyone got a photo of it?

There’s a bunch of other siblings not on ancestry (better)

The Emporium was a mid-line department store chain headquartered in San Francisco, California, which operated for 100 years—from 1896 to 1996. The flagship location on San Francisco’s Market Street was a destination shopping location for decades, and several branch stores operated in the various suburbs of the Bay Area. The Emporium and its sister department store chains were acquired by Federated Department Stores in 1995, and many converted to Macy’s locations. 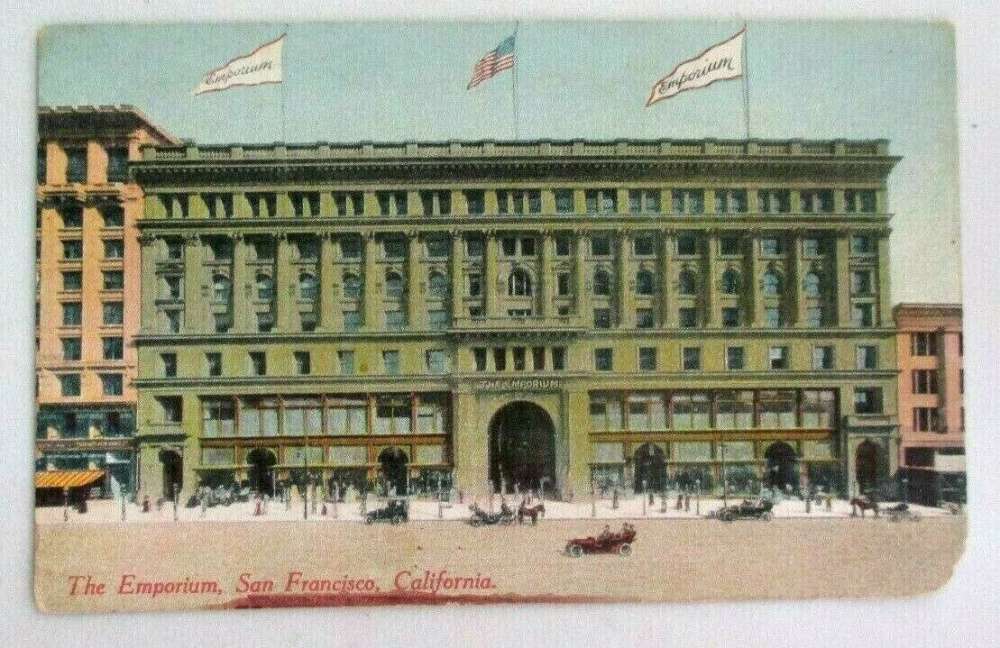 There’s a very interesting story called the Associated Un-Charities written by Frank Norris in 1897 about three blind men in San Francisco, one of whom was the Lavendar Man. It appears in The Apprenticeship Writings of Frank Norris, 1896-1898, Volume 1, from page 166 to page 175 (read it here)

There was likely a Lavender Man in San Francisco before Anthony! 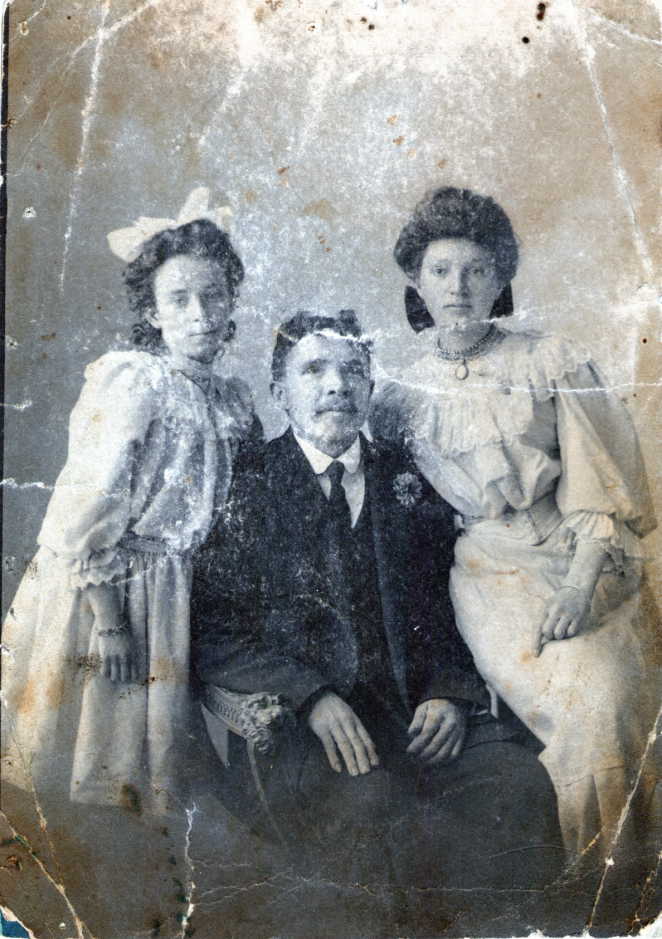 Anthony Barrett the Lavender Man with Jennie Taggert and Catherine Barrett, his sister. 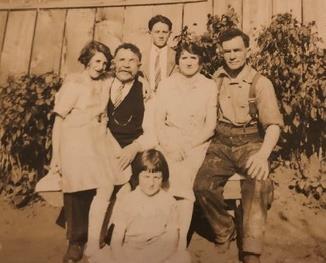 Anthony Barrett with Elizabeth O’Shea (Minor Row)and her (Murphy) family in 1928 in SF. He lived with them for many years, and the young girls used to help Anthony filling his packets of lavender seeds. When Liz was sailing to the US in 1912, she named Anthony’s sister as her contact at her destination in San Francisco.

[note: for his return, he departed Cobh on September 1st 1928 and arrived into NY on September 9th on board the SS Muenchen
Passport no. 10169, issued Washington 29/2/28
Address: 151 Madrid St. San Francisco, California.
He was accompanied on the trip by Eilzabeth O’Reilly (O’Shea) (passenger record)]

Anthony grew up with his family in Tullig, on the hill about a mile to the east of Millstreet. Their home had been built in the mid to late 1800’s, but was felled in the early 1990’s for a new home. There was about 50 acres in the farm.