I am looking for information about my Great Grandmother, Mary Nicholson (Buckley). I understand that she was born in 1865/6, and prior to marrying John Nicholson in 1887/1888 lived in Carrigacooleen, Millstreet. They appear in the 1901 and 1911 Census at 9 Main Street.

Her son, and my Grand Father, Patrick Nicholson, appears in the 1901 Census as a ‘visitor’ in the home of Patrick and ‘Nanno’ (Nora) Buckley in Carrigacooleen. Their son, Denis Buckley, may have been a witness at the marriage of John Nicholson and Mary Buckley. In the 1911 Census( England) Patrick Nicholson appears as the nephew of John and Abina Buckley, in London. John Nicholson died, I understand in 1940.

John Nicholson was baptised on May 11th 1849 in Magheralin Co. Down, the son of Thomas and Catherine Nicholson. They lived not far away at Aghlee, Co. Antrim. His father was a farm labourer, and he had a younger sister Mary and younger brother John.

Marriage of John Nicholson and Mary Field on July 21st 1877 at Cork Cathedral, by (Fr. ?) Daniel McNamara. He a bachelor policeman living at Corn Market Street, son of Thos Nicholson (dead). She a spinster, living at North Abbey Square, the daughter of Eugene Field, a store keeper. In the presence of Dan Dineen, and Mary Anne Cunningham. (this is John’s first wife).

Marriage of John Nicholson and Mary Buckley on 7th January 1888, at the Church of St. Peter and Paul, Cork. He a widower, Royal Irish Constabulary, living in Kilbrittain, son of Thomas Nicholson deceased farmer. She a farmer’s daughter from Carrigacooleen, Millstreet, daughter of Patrick Buckley a farmer. In the presence of Denis Buckley and Maggie (?) Fitzgerald.

Birth of Ellen Nicholson on May 5th 1898 at Main Street Millstreet – to John Nicholson, Main Street, Millstreet, and Mary Buckley – Royal Irish Constabulary Pensioner and Publican.
Baptism of HELENA (HELEN) NICHOLSON of MILLSTREET on 8 May 1898 – sponsors Gerald and Elizabeth Buckley

1901 census: Residents of a house 9 in Main Street (Drishane, Cork)

Their son Patrick was visiting with Mary’s family in Carrigacooleen (see 1911 census for the Buckleys further down).

1911 census: Residents of a house 9 in Main Street (Drishane, Cork)

Patrick Nicholson appears in the census of 1911 with his uncle John Buckley and Family in London! (see the Buckley section below)

Patrick had been living in London with his uncle and family. He took part in WWI from 1917 to 1918. He married Mary Clara Whelan (1891–1971) on December 1918. They had two daughters, Maureen and Monica.
In the 1939 census Patrick was an Assistant Branch Manager Insurance, noted at 24 Dene Road, Ruislip-Northwood, Middlesex, England, but with no family. He died in June 1969 in Hove, Sussex, England.

Marriage of Ellen Nicholson and Jeremiah Corkery on April 26th 1923, at Dromcondra Church, by Francis P.Quinn C.C. He was a telegraphist from 10 David Road, son of Jerimia Corkery a Farmer. She a spinster from Millstreet, daughter of John Nicholson, ex-RIC officer. In the presence of Margaret Nicholson and Thomas J Corkery. 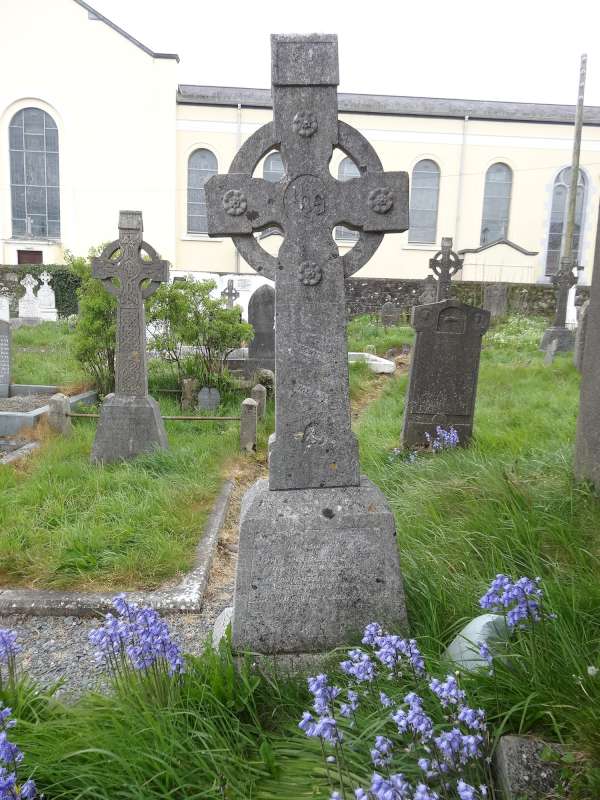 The Nicholsons are buried in Millstreet Church Graveyard, in the corner right behind the old cinema (almost under the projector box). The headstone reads: [Historic Graves]
JESUS MERCY
In Memory of
John Nicholson Main St.
Millstreet Died Jan 22 1940
His daughter Mary Kate
who died Aug 6 1944
His wife Mary Died May 21 1945
RIP

Their house & pub was on Main Street, to the right of DT Marketing (which was previously an archway), and directly across the road from Aisling’s. 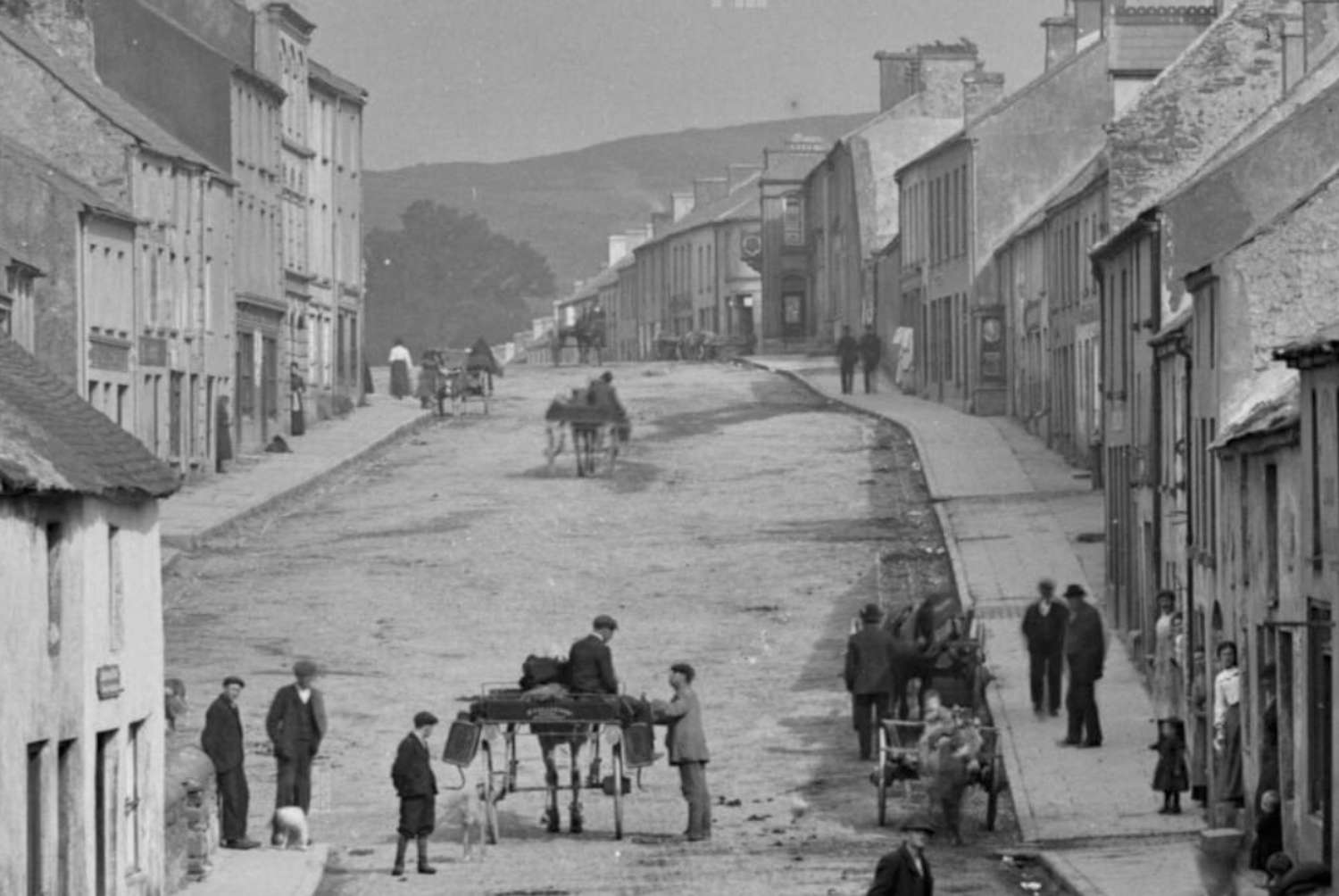 Main Street, Millstreet, approx 1910. Nicholson’s was on the right side, four doors up from where the little girl is standing on the footpath.

Mary Nicholson (née Buckley) was from Carrigacooleen, which is about 3 miles south of Millstreet on the road to Macroom [Map – Directions]. Her brother was known as Dinny Paddy Buckley.

Marriage of PATRICIUS (PATRICK) BUCKLEY of CLOUGHWOLLY and NANO (HONORA) DANAHY of CLOUGHWOLLY on 21 July 1859, by Fr. T. Maginn in Millstreet, witnessed by TIMOTHEUS (TIMOTHY) BUCKLY and ???. (TODO: read the register properly)

They had ten children:

The Buckleys home in Carrigacooleen is near the quarry. [GMaps]

Birth of Patrick Buckley of Carrigacooleen on April 14th 1912, to Denis Buckley (farmer) and Mary Riordan

Birth of Ellen Buckley on June 17th 1915 at Carrigacooleen to Denis Buckley and Mary Riordan. She later married ???? Reardon in the Square. 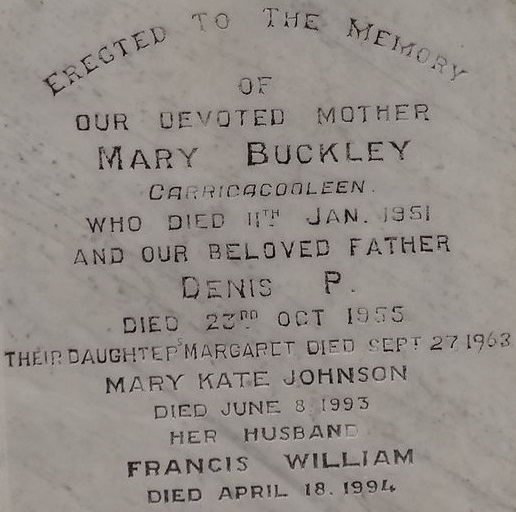 Nicholson in the RIC

Sub Constable John Nicholson summoned Mrs. Margaret Dillon, licensed publican. Merchant’s Quay (Cork City), for having, upon the 30th ult, sold drink to a drunken person. He summoned also Mr. Thomas Dillon, who manages the house for his mother, charge of obstructing him the discharge of his duty. Mr. Alfred Blake appeared for the defence… (Cork Constitution – Thursday 11 November 1875)

POLICE OFFICE (Cork).— Two boys named Moran and Nunan, aged respectively eleven and seven years, were charged by Sub-Constable Nicholson with stealing two pairs of stockings from a woman who had them exposed for sale in Castle Street. The constable stated that while on duly Saturday evening he saw the prisoners take the stockings out of the basket while the woman’s back was turned, he went after than, but when they saw him following them they dropped the stockings on the streets. In reply to the Bench, Constable Clarke said that the parents of the children were confirmed drunkards, and several members of the family liad been the dock forserioas offences. The father one of them had been punished for stabbing a man, who was nearly killed. The prisoners were sentenced to 14 days imprisonment each, the expiration which period they were to be sent to a reformatory for five years. (Cork Constitution – Tuesday 22 February 1876)

Bandon Petty Sessions:- Constable Nicholson summoned Julia Anne Heazle for having been drunk and disorderly the 23rd ult. She was sent to gail for fourteen days at hard labour. (Cork Constitution – Tuesday 04 March 1884)

BANDON PETTY SESSIONS- Constable Nicholson summoned John Coughlan, New road, for having his licensed open for the sale of liqnor on the night of 14th inst., at illegal hour. The constable said found Mr. Coughlan’s licensed premises open for the sale of liquor at twenty minutes past eleven this night; the hall door was open and the door leading to the shop, there were parties inside, but they were lodgers, there were appearances of drink having been consumed at the bar … Cork Constitution – Tuesday 22 July 1884

… Colon, being swom, said he could not positively swear that Burgess was the man who robbed him. Sergeant M’Evoy proved the book was in his property, and was stolen from off the shelf in his house. Constable Nicholson deposed Burgess admitted he knew who stole the money. The prisoner denied stealing the money, and said found the drill book. He was sent to jail for 14 days … (Cork Constitution – Wednesday 12 June 1889)

Mallow Petty Sessions:- Mary Lynch, publican. Bank place, was charged by Constable Nicholson with breach of the Licensing Act by selling liquor on Sunday week to a man named Thomas Garvin and several other strangers, having only a six day licence. Mr Fitzgerald, for the defendant, said that the owner of the house was away and drink was given a brother the defendant to the others as they were friends and he received money- Constable Houraban corroborated Constable Nicholson, and the publican was fined £1 and costs. (Cork Constitution – Wednesday 11 April 1894)

John Nicholson retired from the R.I.C. in On September 16th 1894, at the age of 48, with the rank of constable in the Cork East Riding. His pension came to £42 2s 4d per year paid first at Millstreet[att], and later at Macroom. The pension remained exactly the same until at least 1923.

The Nicholson’s yearly rent in 1901 was £20 which was quite a bit higher that his neighbours. [Sale of Millstreet]

John Nicholson was noted as a donor for the Irish Parliamentary Party in 1909, as organised by the priests and people of Millstreet [Cork Examiner – Saturday 27 November 1909]

At the annual concert for the Presentation Convent School, one of the Nicholson girls was singing: “… The duet, “Life’s Dream O’er” was beautifully sung by the Misses Lily Nicholson and Ciss Murphy…” [Cork Examiner – Wednesday 13 July 1910]
(Presume that Helen was known as Lily?)

At the funeral of an old Millstreet fenian in 1916, the Nicholsons are noted in attendance: JJ Nicholson N.T. as well as J Nicholson.

Apparently two Black and Tans exited Nicholson’s pub just before the murder of Captain Paddy McCarthy in Millstreet in 1920:

“…At this stage Paddy McCarthy suggested that there was little likelihood of any more activity and “Neilus,” Healy proceeded to the junction of Mill Lane with Main St. to have a look round. As he reached the junction he noticed two people leaving Nicholson’s public house at the opposite side of the street. We returned immediately and reported accordingly. We were then about 20 feet from Main St., and as the message was being conveyed by “Neilus” Healy a shot rang out and Paddy McCarthy dropped. He had been shot through the head and was killed outright…”

The pub in the 1940’s is remembered as a quiet one, essentially an old man’s pub. It was sold at some time later, and known after as Andy Sal’s. [To’S].

“John Nicholson, m Brid Ní Ghráda, teachers in Athgarvan, Kildare, 5 children, died quite young. Supposed to have had a lovely tenor voice. Family may have had a pub in Millstreet” – [Orlaith Carmody]

When Francis William Johnston retired to Priest’s Cross, he had plenty of time on his hands, and rather than go into town, he liked to walk the five miles to Healy’s Kilcorney and back for a drink most days. [To’S]

mary kelleher keim – was buckley from there [To’S]

TODO: How long did the Nicholson family stay around? or were they all gone by 1945.

TODO: What happened to the other nicholson siblings? married within Ireland, but where to.