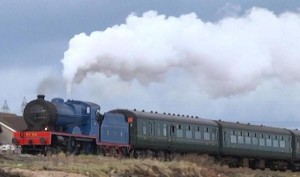 As part of the RPSI South Munster Railtour the #85 Steam Locomotice ‘Merlin’ (pictured right) will be in Millstreet Railway Station today from 14:11 to 14:21 on its way to Killarney, and will pass through on its way back to Mallow at about 17:15.

Details from Steam Trains Ireland and the Wanderer Photos
—–

It wasn’t Merlin #85 that turned up after all :-(, but in terrible conditions there was a nice crowd there to greet the