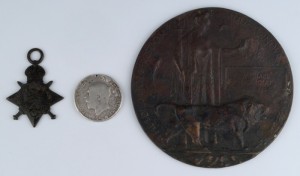 * His posthumous war medals (pictured right) were sold last year. Here are the details from the online sale: “1914-15 Star officially named to 7004 Pte. M. Desmond R. Muns. Fus and Memorial Plaque (considerably pitted) to Michael Desmond. Also with badly damaged and erased British War Medal disc and WW2 mounted miniature group comprising of Defence Medal, War Medal and 1953 Coronation Medal. Both the latter awarded to members of the same family. (4 items)7004 Private Michael Desmond, 1st Battalion Royal Munster Fusiliers was born in Millstreet, Cork anenlisted in Traled e, Kerry. He landed at V Beach on the first day of the Gallipoli landings on 25 April 1915 and was killed in action on the following day aged 31. He is buried in V Beach Cemetery.” 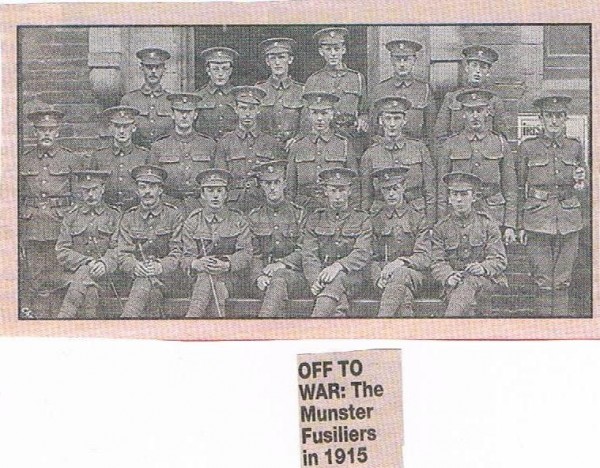 Michael Desmond is in the second row, third from the left

Above is the Baptism Registation for Michael Desmond  [ref]

1901 Census: Family are living in Liscahane [ref], and Michael looks like he was working as a Farm Labourer in Caherbarnagh [ref]

1902 Draft Registration: He was working as a farm labourer for Charles McCarthy

There was another older brother John, born 1887 [ref]

(TODO: there may be more) 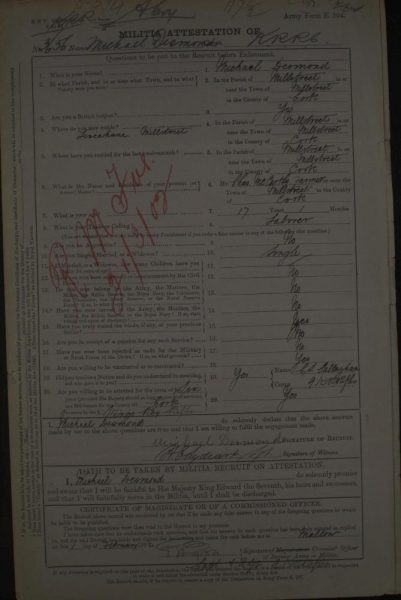 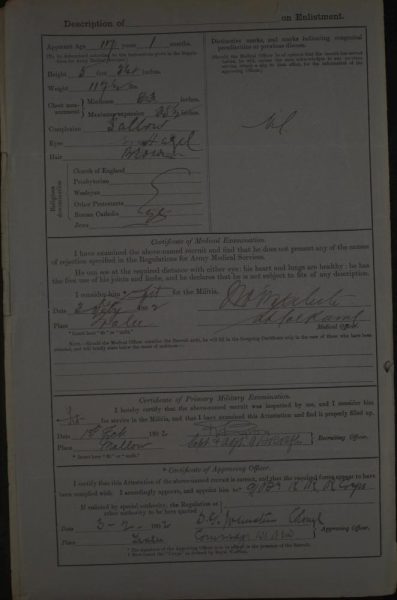 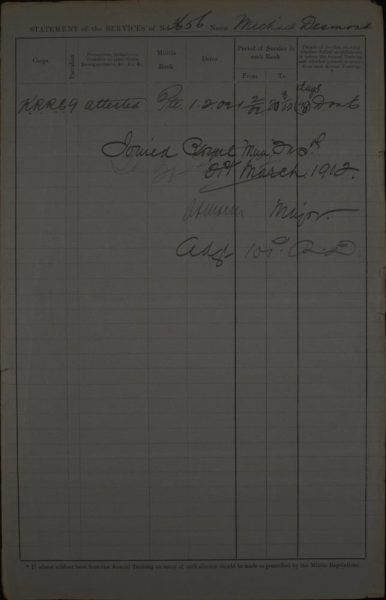 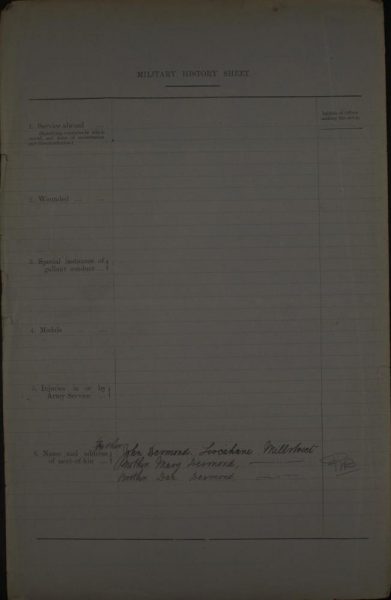 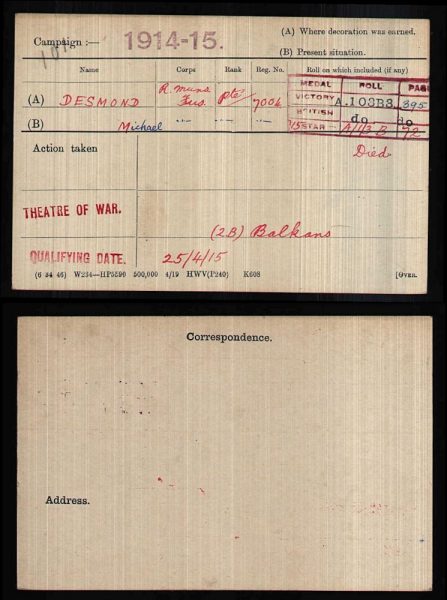 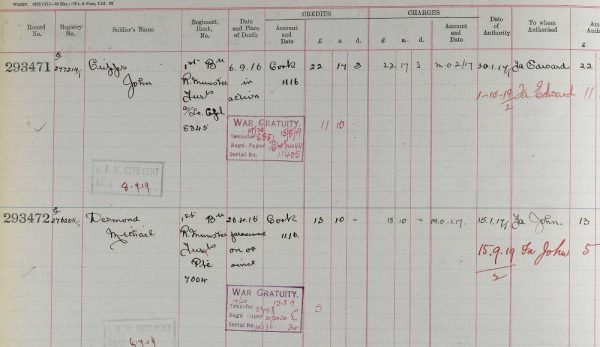 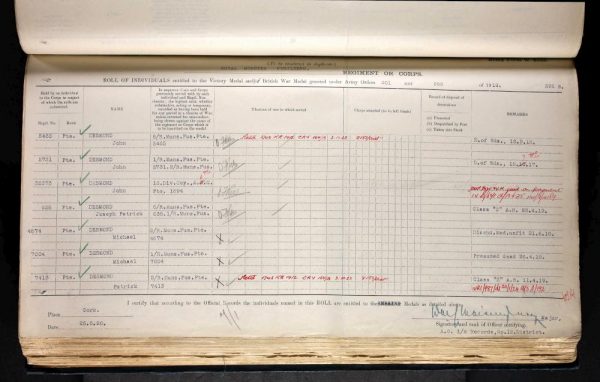 ==== The story of the Munster Fusiliers in Gallipoli ====

The ship ran gently ashore, its exit bows facing the beach, for what was to be the grossly mismanaged British “V” beach landing at Cape Helles. Small boats first carried companies of Dubliners to the beach, when four hidden Turkish machine gun posts opened fire and decimated them. Lighters to the shore were roped together, two companies of Munsters pouring out on to the bow’s gangway also to be ‘literally slaughtered like rats in a trap’.[13] Those who jumped to one side, drowned under their heavy equipment. The withering fire continued as they came down the gangways and were mown down until all boats and lighters were filled with dead and the bay a red sea of blood. The ship’s commanding officer on being informed that they were not succeeding, replied “in British military tradition, offensives once begun are never called off”. That day the Munsters lost 70% of their men and many of their longest serving veterans.

At daybreak next day just three companies of Munsters, two of Hampshires and one company Dubliners had made it to the shelter of some dunes. On the 26th they took fort Sedd-el-Bahr overlooking the bay, charging and taking the village behind. It was in this attack that the heroic actions of William Cosgrove won the battalion’s first Victoria Cross (VC). Turkish counter-attacks were held off. The 28th saw a renewed attack in the Battle for Krithia village, but by the 29th withdrawn due to heavy losses and amalgamated with the surviving Dublin Fusiliers, to form the “Dubsters” battalion of 8 officers and 770 men.[14]

On the night of 1 May the Turks, almost out of ammunition but spurred by the then young Ataturk carried out a tremendous attack. “They crept up in the dark into our trenches bayoneting our men before we knew it had begun. Bayoneting on both sides was terrible. At dawn the Turks were mowed down, and heaps of bodies and streams of blood remaining everywhere.” [15] The battalion was reduced to 4 officers and 430 men, who attempted further attacks the following days, but by the 11th were down to 372 men. Receiving new drafts on 29 May, the Munsters and Dubliners were separate units again, the Munsters by 4 June numbering 40 officers and 500 other ranks, though handicapped by the new recruits being much too young and inexperienced. Shelling absolutely demoralised them. They withheld a further attack on 17 June killing 300 Turks. New drafts replenished officers to 23, other ranks to 588. They took part in the Divisions assault on 28 June securing five trench lines. This provoked a general attack by the Turkish side along the Cape Helles front on 5 July, the Turks losing heavily.[16]

(from wikipedia)
===========
The excellent RTÉ Documentary “Gallipoli – Ireland’s Forgotten Heroes” broadcast on April 21st 2015 gives a great idea of what happened 100 years ago:

by the Ataturk: “Those heroes that shed their blood and lost their lives… you are now lying in the soil of a friendly country. Therefore rest in peace. There is no difference between the Johnnies and the Mehmets to us where they lie side by side here in this country of ours… You the mothers who sent their sons from far away countries wipe away your tears. Your sons are now lying in our bosom and are in peace. After having lost their lives on this land they have become our sons as well.”

The ones who never came home – the cemetery at V Beach at #Gallipoli. #NeverForget #Gallipoli100 pic.twitter.com/TYA4bJ4ZFm

Ollie Griffin laying a wreath at the Cenotaph #Cork to mark 100th anniversary of #Gallipoli pic.twitter.com/nyX50wkeUZ

==============
This documentary explores the planning, operation and ultimate failure of the attempt at the Dardanelles to force Turkey out of the Great War. It also explores the lessons learned and how they were applied to the D-Day landings in 1944.

4 thoughts on “On this day 100 years ago: Michael Desmond died in Gallipoli”