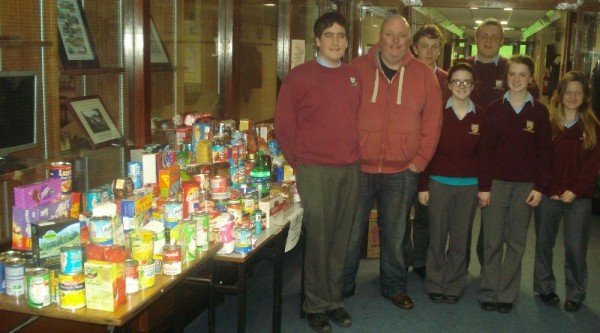 The staff of Penny Dinners have asked us to pass on their thanks to everyone in Millstreet who has contributed so generously to Anna’s Collection for Penny Dinners.
We have been absolutely stunned by people’s generosity. The amount collected so far, particularly over the Christmas period, has completely surpassed our expectations. It makes us very proud of our little town.
Thanks to the customers of Guy & Dolls, Colemans Centra and SuperValu. A big thank you to the staff, pupils and parents of Millstreet Community School who donated a staggering volume of goods. The photo shows Stephen and some of the Transition Years with just a small portion of what was collected.
We also have to thank the following people who have facilitated the collection and /or delivery:

Collection boxes are still in place in Colemans Centra, SuperValu and Guys & Dolls.
January is a very difficult month for Penny Dinners because the need is so great in this bitterly cold weather and donations dry up after Christmas. We did a delivery over the weekend and staff were waiting at the door to take it in and were absolutely delighted to get it. We called before they had opened for the day and there were already people waiting outside the door. Penny Dinners operates all year round so we will continue to deliver to themas long as the collection boxes are filling up.
Every donation, big or small, counts and is appreciated.
Any local businesses wishing to donate or get involved can contact 087 6886725.
Thanks for supporting this great cause