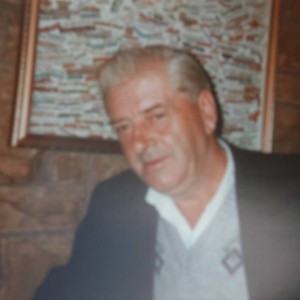 With his wife Peg they raised their children at Claramore before moving to Murphy’s Terrace
The quiet man with few words to say
And sad to think that he is with the departed
With the dead of Millstreet he forever lay.

There was so much to like about in Paddy Healy
I knew him before he grew old and gray
He drunk many a pint of frothy dark porter
Without being aggressive or loud in any way.

He will be missed by his family and all of those who knew him
And memories of him are well worthy of recall
But the fate that has befallen Paddy Healy
Is a fate one day that does await us all.

Paddy Healy one loved in Millstreet in Duhallow
Lets hope from life his was not a painful release
He now lay in the quietness of St Mary’s
And may he rest forever more in peace.

“Paddy Healy” was written by Francis Duggan in 2008

Also, thanks to Paddy’s daughter Margaret for sharing the above photo of him with us. It was taken in the early 1980s in Helen & Dave Curtin’s Bar in the Square.