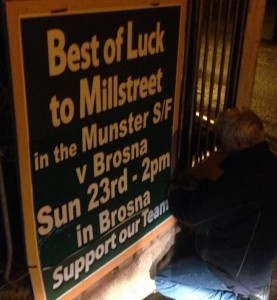 Support the lads. C’mon the Sráid!

.
We’ve never been in this position before, so we’d encourage everyone to get out and support the lads as Brosna at home will have a big following … and make your voices heard ! It should take most of an hour to get there [directions]. A very large crowd is expected, so go in plenty of time they are trying to park everyone in a 5 1/2 acre field at the edge of the village. (That’s going to be fun with all the recent rain). The weather looks good (8C sunshine and little wind), but bring a warm coat and hat as the pitch is it’s up on top of a hill, the stand is small, and there’s little other protection.

There’s been quite a bit in the media in advance of the game:

Collins (Tadgh) relishing chance to prove skills in border skirmish – “It’s a huge test for us to be crossing the county bounds and coming up against the Kerry champions. All involved with Millstreet are just thrilled to be playing championship football in November and with a degree of luck, the campaign can be extended.”…  –  the Corkman

Cork hurling star Ellis is key for Millstreet – If their performance in the quarter final is anything to go by, Millstreet couldn’t be in better shape heading into next Sunday’s clash with Brosna. The Cork kingpins were very impressive as they thrashed … – the Kerryman

Millstreet are up against it – Since the inception of the competition in 2003, a Cork team has managed to go all the way on just two occasions, with Carbery Rangers claiming the inaugural title and Canovee bringing the provincial crown to Leeside again four years later – the Corkman

Millstreet aim to end Kerry reign – MILLSTREET attempt to end a seven-year wait since Canovee became the last Cork champions to defeat their Kerry counterparts in the competition.
That was at same stage in 2007, when the then Cork standard-bearers savoured a 2-9 to 2-6 victory over Keel en route to being – the Evening Echo

Keane delighted to host Millstreet for Munster Semi Final – Brosna manager Jimmy Keane is thrilled that Brosna have been allowed to host Millstreet of Cork in the Munster Club JFC. Sunday’s provincial semi-final will go ahead in North Kerry after Munster Council approved the club’s grounds as venue for the match – Hogan Stand

Brosna Defender A Doubt For Munster Semi Final – Flor McAuliffe is Brosna’s only injury concern ahead of Sunday’s AIB Munster Junior Club Football Championship Semi Final with Millstreet. The defender got concussed in their County Final win over Dromid Pearses last weekend and is rated as very doubtful for the game – Radio Kerry

Game on: Brosna v Millstreet – match preview – Millstreet had matters all their own way in the quarter-final win over Naomh Eoin from Clare but a much tougher test awaits in the Kingdom on Sunday. Brosna are somewhat surprise winners of the Kerry Championship, they defeated – Cork Independent

Bring on the Kerry champs says William O’Leary – That was the message delivered by Millstreet coach William O’Leary following their emphatic victory over Naomh Eoin of Clare last Sunday. While teams from the Kingdom have dominated the Munster club junior- the Corkman

It’s really hard to know what to expect, but expect a really good Brosna side, as all sides coming out of Kerry are good:

But we have a good fast skillful team and if we stick to what we do best, and manage to match them at the physical stuff, i’d say we have a chance in any game.

@Millstreetgaa look to Canovee code from 2007 to unlock keys of Kingdom's march in Munster JAFC. pic.twitter.com/gexNVkCroG

@MillstreetGaa 11/4 to break Kerry monopoly in Munster JAFC with 9 outright titles from past decade for Kingdom sides pic.twitter.com/3Z0ExzBGpY

@millstreet_town Countdown #2 we all know that on ANY GIVEN SUNDAY our lads are the best!! http://t.co/B9QPSrWVgN

@millstreet_town countdown #5
it's almost time to play ball, come out and support the lads!! http://t.co/sbPJCCImU3