This evening Millstreet footballers brushed aside the challenge of Clare Champions Naomh Eoin on a scoreline of 3-14 to 0-9. Today has been a day of dreams for Millstreet GAA. The Camogie Minors win a County, followed by the lads moving to the next round of the Munster Junior Football Championship.

Below is the full commentary of the game (click here if it won’t play for you below), photos and more:

Millstreet will play Brosna at a Kerry venue on the weekend of November 22nd/23rd. Brosna beat favourites Glenbeigh/Glencar by 1-8 to 0-10 yesterday with a last minute goal in the Kerry semi-final [match report]. They play Dromid Pearses in the final at 2:30pm Saturday 15th November in Fitzgerald Stadium.

Naomh Eoin were simply no match – As opening statements of intent go, this was fairly compelling. Apart from some erratic shooting in the first half, Millstreet’s performance left little to be desired as they smoothly dispatched Clare kingpins Naomh Eoin to make a winning debut in the Munster club junior football championship at Mallow last Sunday. The quality of the opposition has to be taken into account, of course, when it comes to assessing Millstreet’s future prospects, and it can be taken for granted there are stiffer assignments ahead for the Rebel standard-bearers … (the Corkman 13th Nov)

Bring on the Kerry champs says O’Leary – That was the message delivered by Millstreet coach William O’Leary following their emphatic victory over Naomh Eoin of Clare last Sunday. While teams from the Kingdom have dominated the Munster club junior football championship since 2008 and Millstreet must travel across the county bounds for their next assignment, O’Leary appears to be brimming with optimism about their prospects of making further progress … (the Corkman 13th Nov) 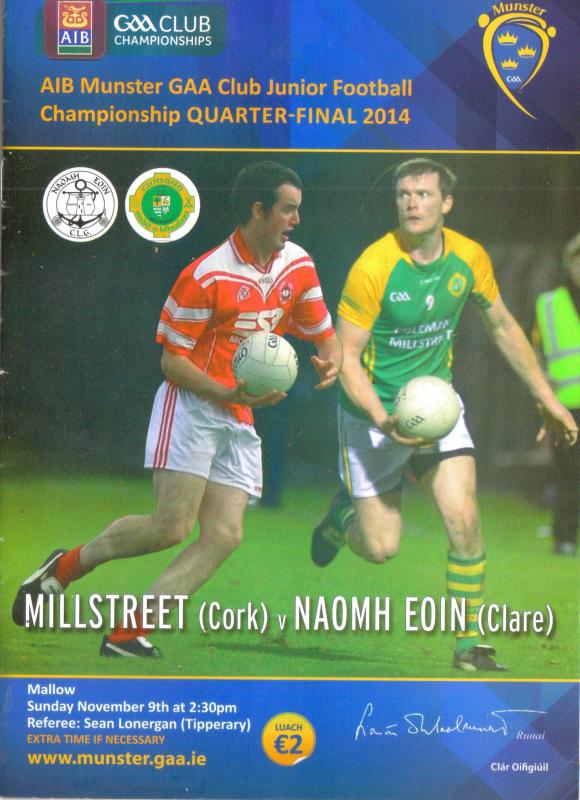 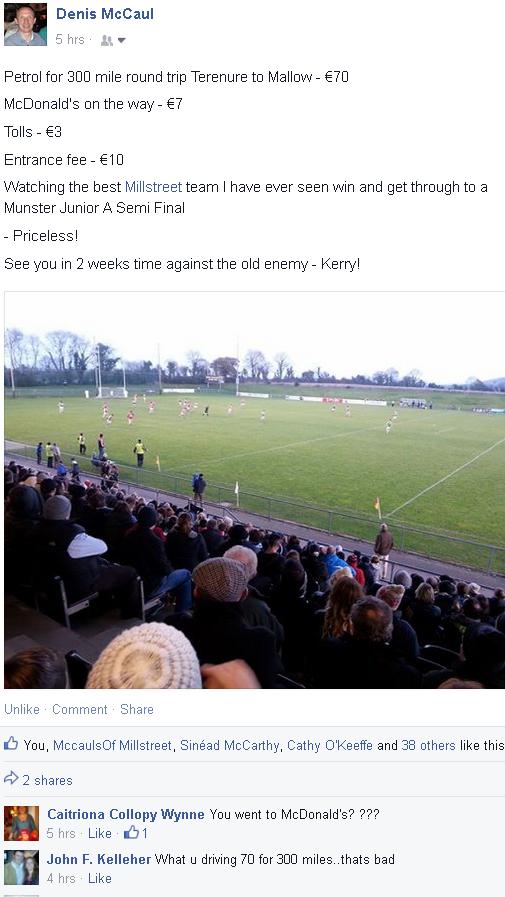 I’d say it’s the worst kind of game we could have played. It was too one-sided, and hopefully it won’t give us a sense that we’re brilliant or something. It will be hard and dirty from here on in. Brosna apparently are big strong men, and will love a dirty wet winters day (look at their team photo … their goalie is the smallest in the back row 🙁 ). Hopefully, four weeks of championship in a row will have worn them down a bit. There will be nothing easily had from here on in. At least we’ll be able to have a look at the opposition next Saturday (2:30 in Fitzgerald’s Stadium, Killarney)

@millstreet_town thank you for your support, don't forget to call to town at 6:30 to celebrate the minor Camogie county win today.

Millstreet warming up before they embark on their maiden Munster voyage pic.twitter.com/h6EwVfJUw4

and we got a small mention on sky sports!

…. even after they had kind of messed up earlier

Congrats to @MillstreetGaa on a fine win today…time to focus on the big challenge ahead next weekend.

Best wishes to @MillstreetGaa today as you begin the road to Munster and All Ireland glory. #onestepatthetime. 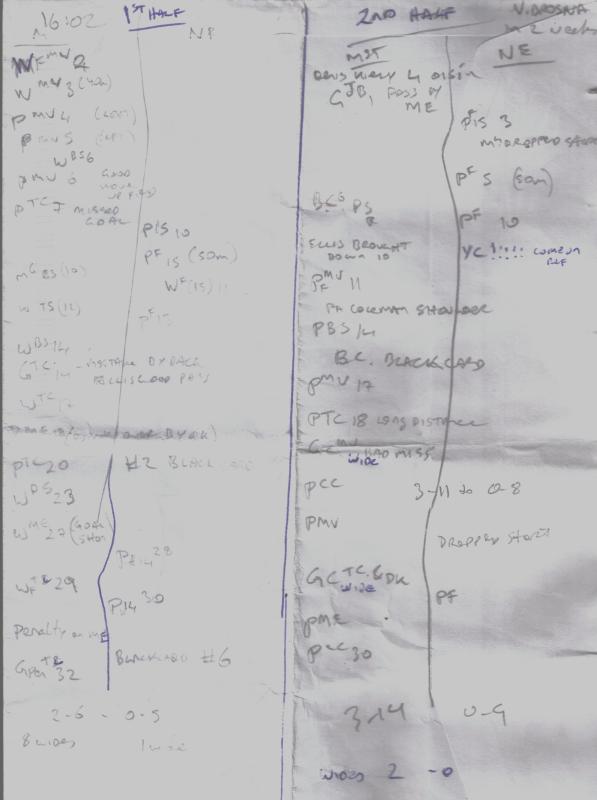 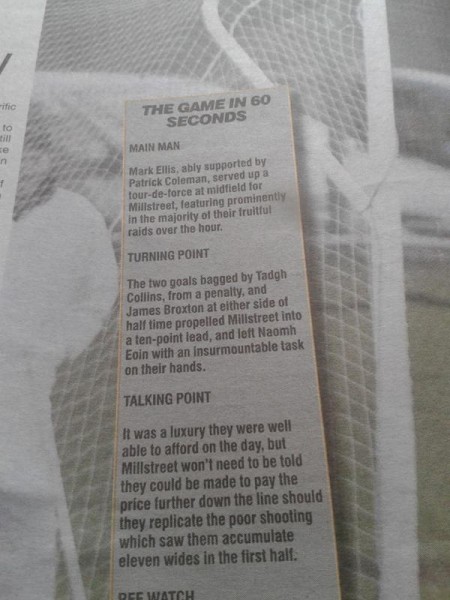 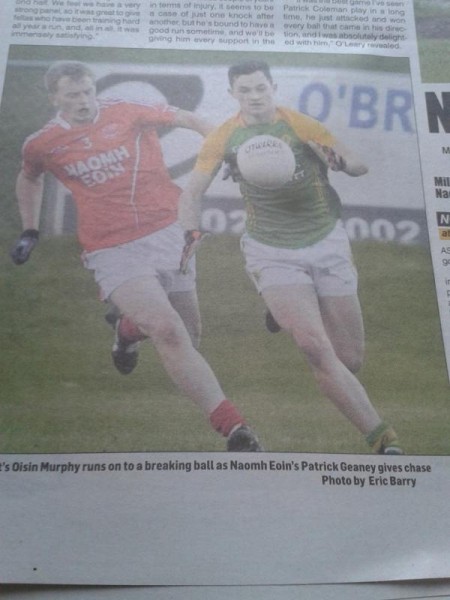 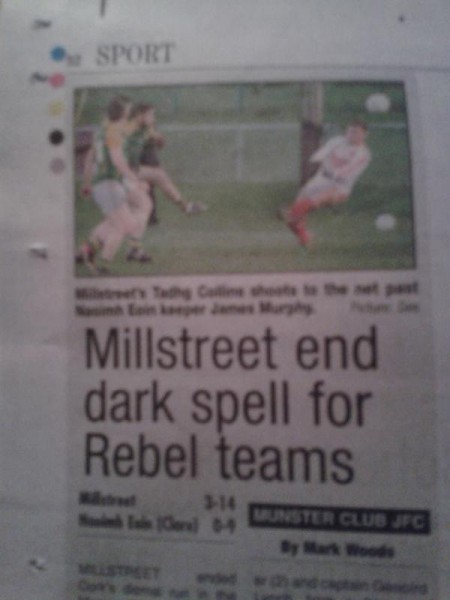 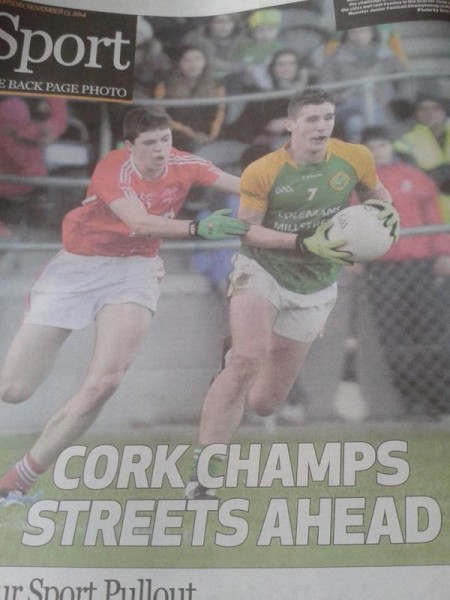 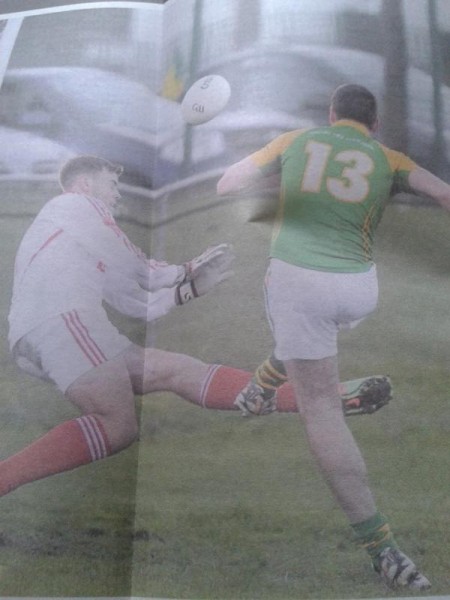 2 thoughts on “Footballers through to Munster Semi in two weeks”