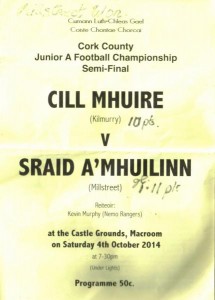 Hopes were high amongst spectators from both sides in Macroom last night as Millstreet took on Kilmurray in the County Junior Football Championship for a place in the final in three weeks time. Kilmurray were tipped as favourites for the county even before they got out of Muskerry, while Millstreet were hoping to repeat see some of the fine form that saw them win Duhallow and the grit and determination that saw them beat Glenbower in the last round.
It was the first championship match played under the new lights in Macroom GAA pitch, and conditions were lovely – calm and a cool 8C, but the rain during the day and the muggy conditions was going to lead to slippery conditions during the game. As ever in Macroom there were lots of traffic jams and parking problems before the match, as a very large attendance from both sides came to cheer their side, and there was a real atmosphere of anticipation.
From before the match it was apparent that the Kilmurray lads were physically bigger than the Millstreet lads, but it’s something Millstreet teams have had to adapt to got years so we we figured it wouldn’t be a problem.
Kilmurray were quick out of the blocks with two nice points in the first two minutes, and we hoped this wasn’t going to be the way for the rest of the game, but a quick reply from Brian Sheehan settled the Millstreet nerves.
The Kilmurray free taker had been throwing points for fun from outside the 45 before the match, so when his chance of a 45 came in the 6th minute, he duly fired it straight over the middle with a lot to spare, so it was fairly obvious that tonight wasn’t the time nor the place for giving away frees in scorable positions. Straight from the resulting kick out, a quick long ball to Tadgh Collins in the corner saw him turn his man and fire over a lovely point, and for the next 12 minutes, Millstreet hit a purple patch, dominating midfield, with intelligent patient interplay, all the time supplying lovely ball to the inside forwards, which saw Mark Ellis score a point followed by four from Mike Vaughan.
Kilmurray looked rattled, but a beautiful long range range point from their midfielder (19mins) seemed to raise them and they fought to stop the game running away from them. For the rest of the half, both sides cancelled each other out until the last few minutes when two Kilmurray points sandwiched a Michael Vaughan free to leave the score at 0-8 to 0-6 at the half. Couldn’t help but feel that we should have been further ahead at the half though.
Kilmurray seemed to go up two gears for the start of the second half scoring two points and having two close misses in the first three minutes, as they took over midfield where Millstreet had dominated in the first. Their half back line and half forward line all squeezing towards the middle of the pitch and making space something at a premium, which suited them well and paid immediate dividends. The sides were level, and once again we hoped Kilmurray wouldn’t run amok. But Millstreet readjusted and good use of width, passing and off the ball movement culminated in three points to Mike Vaughan in the 5th (free), 6th and 7th minutes, but Kilmurray replied with another free (10th min). Still two points was still breathing space as Kilmurray hadn’t threatened the goal at all.
After that was a most intriguing period when Kilmurrays dominance in the middle began to offer more scoring chances, which were attempted from long distance as they found it hard to get close to goal … and they had to miss after miss, and then their tactic of squeezing the middle backfired.
A few quick passes in the middle saw Mark Ellis race in behind the Kilmurray half back line who were a full 60 yards in front of their full back line, he passed it to the inside forwards who drew their men out, and  gave the ball back to Mark who was all alone 6 yards out as he punched a brilliant well worked goal to the net. And we could have had another goal a minute later, but for a Kilmurray defender who finger tipped away the last pass which would have seen Mark again clear in on goal.
Kilmurray continued their long range shooting to no avail as they seemed to tire, fail to get inside the Millstreet cover, and lose belief. They only threatened the goal once and Alan Murphy got his body in the way in a crowded goalmouth to clear the danger. In all Kilmurray kicked eight wides in the last 20 minutes to Millstreet’s four and their last point from a free in the 29th minute was only a consolation when it came, as the final whistle blew soon after and the Millstreet team and supporters celebrated and looked forward to a Junior County Final for the first time since 1963.

Connie’s looking down on us. Come on the Sráid!! 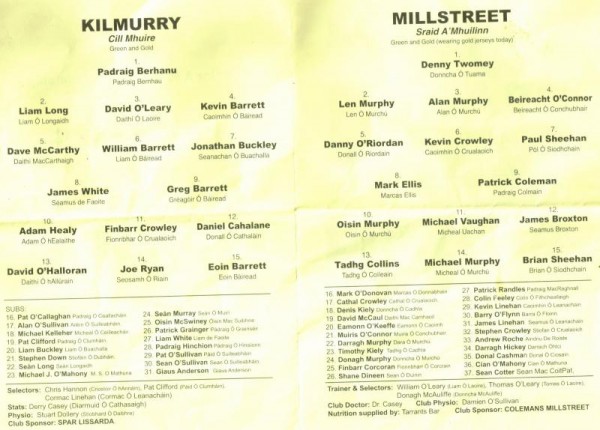 Millstreet return to Co. JAFC for 1st time since 1963 on facing up to Ballygarvan or St. Finbarrs @OfficialCorkGAA pic.twitter.com/bdtWwTtx7k