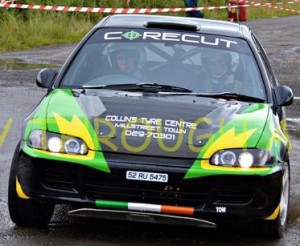 Rallying: at the Imokilly Single Stage Rally (July 28th): Alex Towmey / Stephen Collins (#101) finished in 48th  [photos]. See the video below of one of their runs. Liam Moynihan was also co-driver for the winning car (#3) which had Barry Meade in the driving seat. Declan Buckley (#113) finished in 77th in his Ford Escort [see photo]. Daniel Lucey/Derry Healy (#38) retired in stage 2 in their Ford Escort Mk1. [full rally results] [photo albums from the rally: 1, 2]

Greyhounds: Brendan O’Shea’s dog Crossfield Star begins his quest for the 2012 Derby in Shelbourne Park (4th Aug) Race 6 at 9:15pm [read the preview in the Examiner]

Crossfield Star wins his first round race (heat 17) on his way to the Ladbrokes Irish Greyhound Derby 550 (Aug 4th). Slow out of the traps and showed good acceleration, but slowed at bend three before pulling away at the end to win by 2.5 lengths in a time of 29.95. He’ll need to do better as the competition gets stiffer.

More sports & results will appear in this article as they become available over the coming week. If you know of results / fixtures please email them to us: <email>