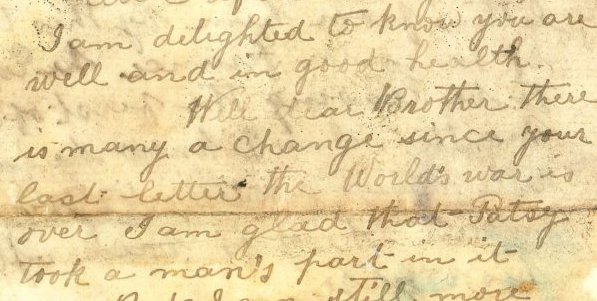 Patrick O’Leary from Louisville, Kentucky, USA has very kindly been given us three letters that are nearly a century old, sent by his Great-Grand-Uncle Patrick O’Leary of Adrivale, Millstreet to his Great-Grandfather in the USA.
Below is the first of those letters (4 pages) from March 16, 1919 where Patrick talks about the end of WWI, Patsy who was a soldier in the war, President Wilson, the 1916 rising in Dublin, and Sinn Féin.
The Patsy in the letter was his Grandfather Patrick John O’Leary. He was born in Ohio 1894 and he served in WWI. The Sister Mary Francis in the letter is his Great Aunt that was a nun. 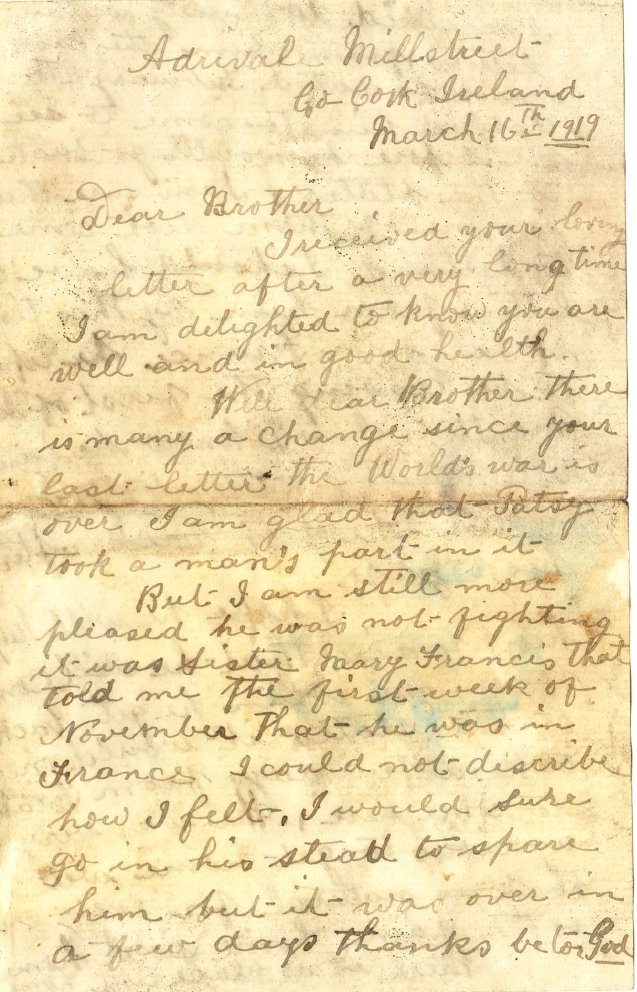 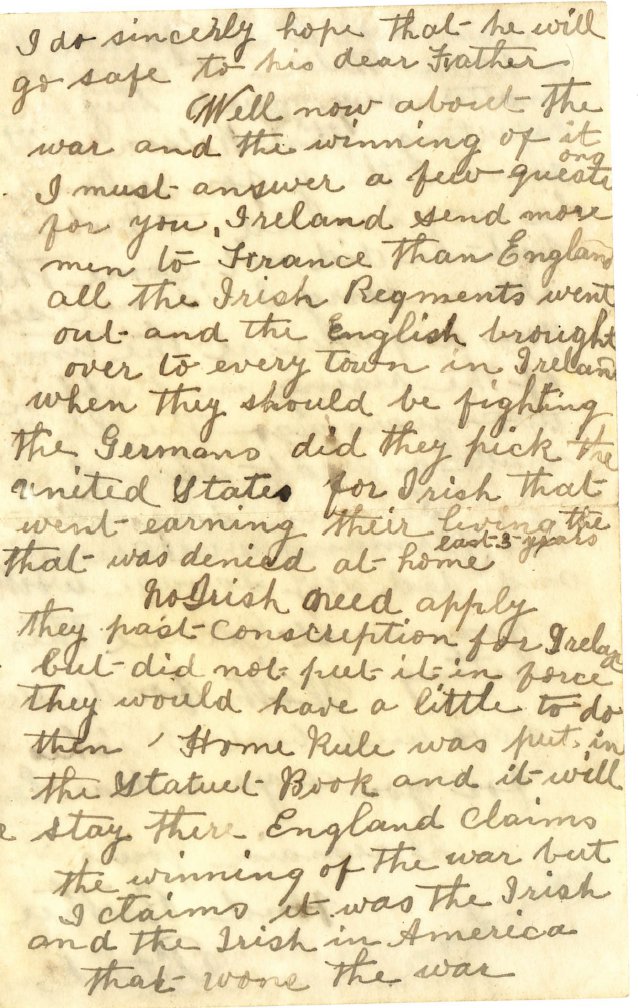 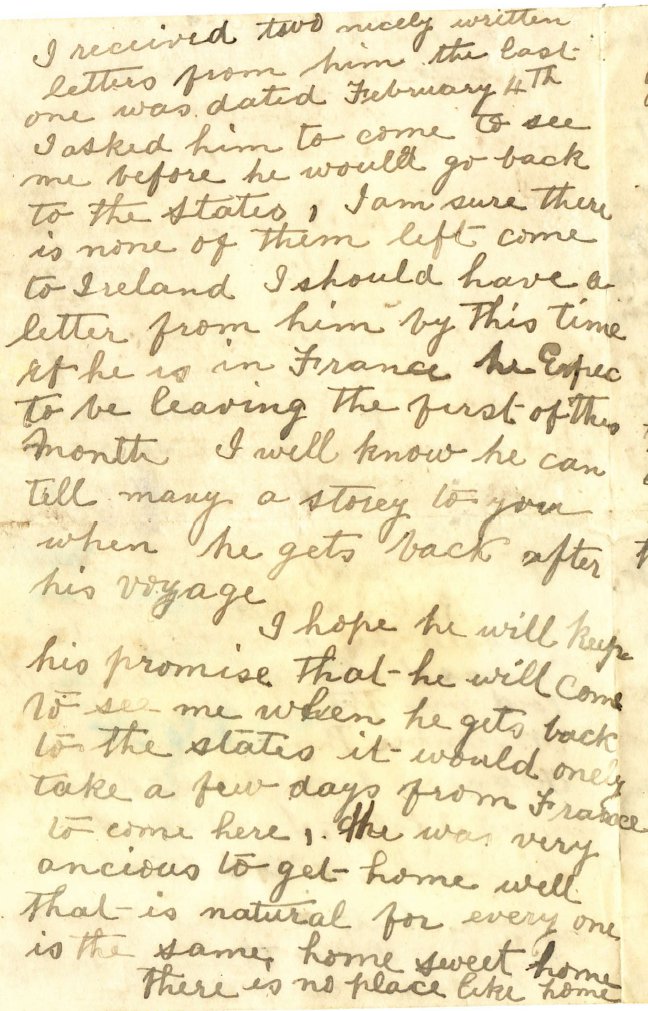 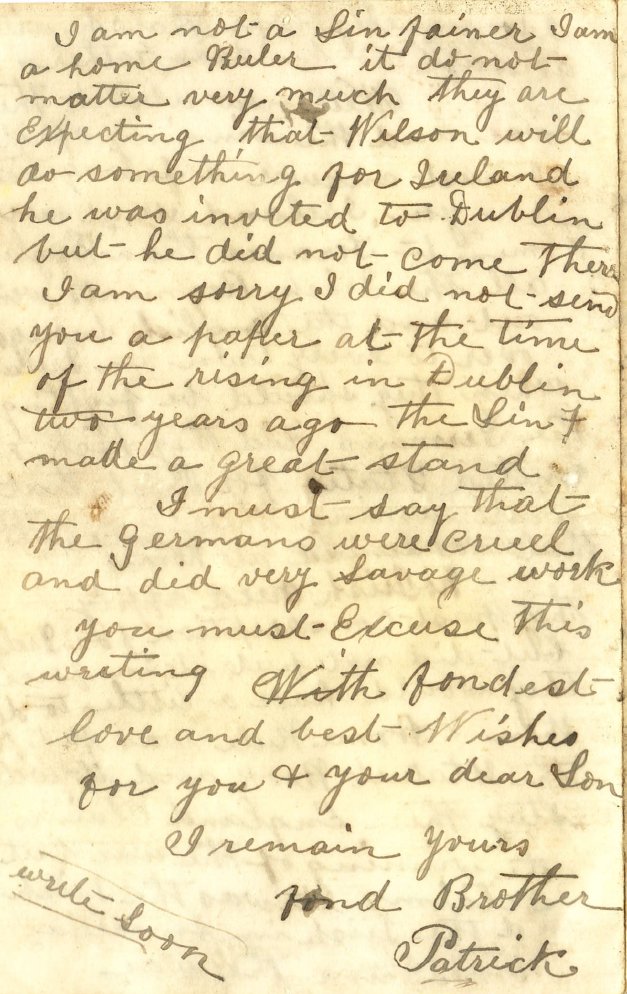 The second and third letters will be published soon

=== TEXT ===
Dear Brother
I received your lovely letter after a very long time.  i am delighted to know you are well and in good health.
Well dear brother there is many a change since your last letter the World’s war is over I am glad that Patsy took a man’s part in it
But I am still more pleased he was not fighting. It was Sister Mary Francis that told me the first week of November that he was in France. I could not describe how i felt. I would sure go in his stead to spare him but it was over in a few days thanks be to God.
I received two nicely written letters from him the last one was dated February 4th. I asked him to come to see me before he would go back to the States, I am sure there is none of them left come to Ireland. I should have a letter from him by this time if he is in France. He expects to be leaving the first of this month. I will know he can tell many a storyto you when he gets back after his voyage.
I hope he will keep his promise that he will come to see me when he gets back to the states. It would only take a few days from France to come here. He was very ancious to get home well that is natural for every one is the same. home sweet home. There is no place like home.
I do hope that he will go safe to his dear father.
Well now about the war and the winning of it. I must answer a few questions for you. Ireland sent more men to France than England. All the Irish Regiments went out and the english brought over to every town in Ireland when they should be fighting the Germans did they pick the United States for Irish that went earning their living the last three years that was denied at home.
No Irish need apply they past conscription for Ireland but did not put it in force. They would have a little to do then. Home Rule was put in the Statute Book and it will stay there. England claims the winning of the war but I claims it was the Irish and the Irish in America that won the war.
I am not a Sinn Feiner. I am a Home Ruler. It do not matter very much they are expecting that Wilson will do something for Ireland. H was invited to Dublin but he did not come there.
I am sorry I did not send you a paper at the time of the rising in Dublin two years ago. The Sinn F made a great stand.
I must say that the Germans were cruel and did very savage work. You must excuse this writing. With fondest love and best Wishes for you & your dear son.
I remain yours fond Brother
Patrick
— write soon —