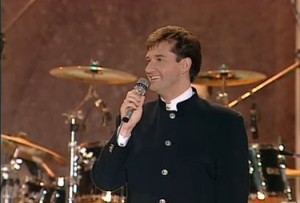 Daniel is accompanied by the RTÉ concert orchestra, conductor Noel Kelehan, and the Daniel O’Donnell band.  He is joined on stage by Mary Duff, Mary from Dungloe as well as others.

See the concert on RTÉ Player.

Update (1st May 2013): the concert has been added to youTube recently. you can see it below:

7 thoughts on “Daniel O’Donnell in Millstreet”