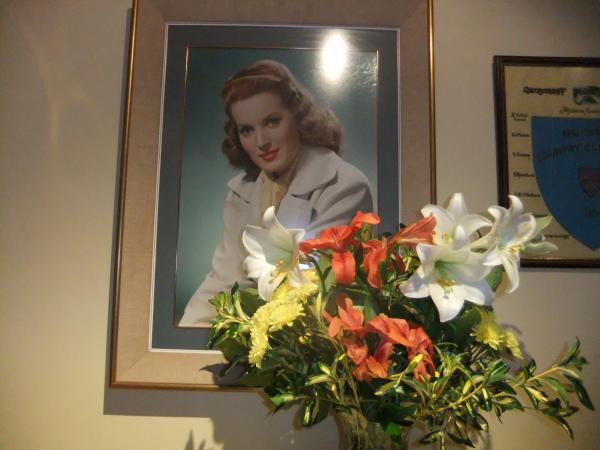 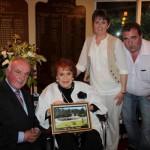 Thanks to the dedicated efforts of William & Ita Fitzgerald and the very significant assistance of Glengarriff Golf Club General Manager, Des Keaveney together with the much appreciated help of Maureen’s personal assistant, Caroline – LTV2 was indeed remarkably privileged to be allowed a brief interview with the iconic film star legend, Maureen O’Hara.   Maureen who is such a truly magnificent role model for her countless fans and admirers worldwide was so sincerely welcoming, superbly entertaining and looking thirty years younger than her 90 years.    She will shortly be celebrating her 91st Birthday and intends to celebrate her 102nd Birthday in time to come (as she indicated in our interview).    Not only is she from a family famed for longevity but from a family of “great lookers”!    Maureen has requested that we place a stone with her name on it into the Holy Well at Tubrid.   We believe that some years ago Maureen visited Millstreet and called for a message at Reen’s Pharmacy…However,  unfortunately, no camera was on hand to record such a significant moment in Millstreet’s history.   We shall be broadcasting Maureen’s interview on LTV2 in our Autumn schedule.   A very special word of thanks also to Glengarriff  Golf Club’s President, Eddie Mullins and Captain Teddy O’Sullivan both of whom together with Des Keaveney made us feel so very welcome.   Here we share highlights of the evening when Maureen arrived at the conclusion of the Maureen O’Hara Film Classic Festival to present the Prizes to the ladies who won in the Maureen O’Hara Annual Golf Classic which is now in its 28th year.   (Seán Radley)

5 thoughts on “Remembering Legendary Film Star, Maureen O’Hara & Her Connection with Millstreet Including Her Admiration for Turbrid Holy Well”