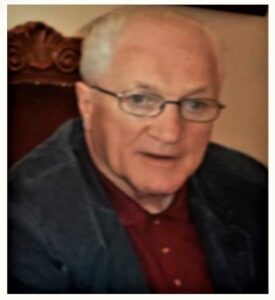 On this the first anniversary of Johnny’s passing, we his family wish to acknowledge and thank most sincerely all those who helped and supported us during this difficult time.

We would like to thank the doctors and staff at Tullig Medical Centre Millstreet, Dr. Bertie Daly Newmarket, and Reen’s Pharmacy Millstreet, for their help and support throughout Johnny’s illness.

We would like to thank those who attended his funeral and who watched it online, those who sent Mass cards, flowers, posted condolences on rip.ie and who supported us in any way.

We would also like to thank our relatives, neighbours, extended family, and friends for their support and help over the last year.

As it would be impossible to thank everyone individually, please accept this acknowledgement of our sincere appreciation for your kindness and thoughtfulness.

The Holy Sacrifice of Mass has been offered for your intentions.

Your life was a blessing, your memory a treasure, you were loved beyond words and missed beyond measure.

Johnny’s Anniversary Mass will be celebrated on Sunday, 16th October 2022 in Cullen Church at 9.30 a.m.