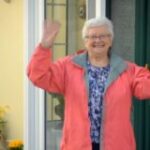 This is Holy Week, in the runup to Easter, it’s a week and a time when we can look back on the past number of weeks of Lent since Ash Wednesday and ask ourselves if we have done anything special by way of fasting or giving of alms or denying ourselves of any of the comforts of life for the honour and glory of God. At my time of life it is not easy to give up some favourite thing, so instead I’m inclined to make little sacrifices as I go along. No butter on my bread now and again, nor salt in my egg, things like that as the notion takes me. Saying a few more prayers, giving more to the poor and needy and it all helps to stave off any feeling of guilt as the weeks go by. But Holy Week is different, days when we think we are never doing enough to ease that inner voice which keeps telling us that we ought to do more, the feeling of guilt goes on every day. With the result that with so much emphasis on our longing for something, our feeling or appetite for it gets stronger, sometimes, if we’re to admit it, out of control and we devour the damn thing rather than to be looking at it.  Hopefully God loves the weak as well as the strong. Then Easter Sunday dawns and all the ties of Lent are loosed and we find that our longing for our favourite thing is easily satisfied after all and we wonder why didn’t we do more. It happens every time.

This is indeed a very Holy Week and in other religions, the feast of Easter is more important, more significant than Christmas itself. Honouring as it does the Resurrection of Christ from the dead. Being born is a very natural and universally accepted thing. But rising from the dead is a one off and confined only to the Son of God himself. In the coming days we have the usual list of Holy Week devotions to attend. Because of a Funeral, Eucharistic today will begin after the 12 noon requiem Mass. Holy Thursday devotions in Cullen, 6.30  and Millstreet 8 pm. Good Friday The Lords Passion in Cullen 6.30  and Millstreet 3 pm.   Holy Saturday Polish Mass 2.pm.

Confessions after some devotions and on Saturday From 12.30 to 1.

Stations of the Cross both in Ballydaly and Millstreet on Good Friday at 8 pm.

THE divine Mercy Novena starts on Good Friday  at 4 and will continue in the Church daily at 3 finishing in the church on Divine Mercy Sunday April 24th.  Please attend all the Easter Ceremonies Well.

In our childhood we got up early to see the sun dancing on Easter Sunday morning. We were told it would and we believed that it did. I can never recall a bad Easter Sunday morning. The sun seemed to have  shone  every time.   Farmyards would be alive ,with screeching pigs and cackling hens with chickens in the wake and in the fields beyond the stream the sound of the corncrake. Easter was all about eggs, maybe because it was connected to the hatching season and it was a sort of a dare to see who could eat the most boiled eggs on the day. Hen and duck eggs were quiet common because there would be large flocks of either. But numbers of turkeys and goose were small at that time of year, usually kept for reproduction only. But at Easter the man of the house might get a special treat and be given one of the precious ovals while the others packed in as many as they could of the lesser variety. Sometimes a man going to a local house card play would take along a goose egg and play it in the cards. Thus making a nice little earner for himself. Sunday Masses were at half past eight and eleven. Holy Communion was given out at the 8.30 mass only back then. Since you had to fast from midnight the previous night it was considered too long for those attending second mass to be without food. People still made the effort to receive.   On the morning, they would have to be up early, milk the cows etc, take the milk to the creamery and hurry home to wash and change and everybody wore their best clothes going to Mass. These outfits were changed immediately after coming home and carefully put aside. Families were big and it was no notice for one coming home from first mass  give the give the coat to the one going to second.  Our Dad would cook  a roast dinner and after the older members had cleared the table and washed the dishes, the rest of the day was spent out in the open, hunting rabbits, searching for  birds nests, playing hide and seek.  Innocent games which we made up as we went along. The rules of Nature and safety  were embedded in our everyday lives.    Never interfere with the hatching bird, never  waste food, never stand in front of a bull or behind a horse. It worked for us because we never broke a bone or had any serious injury. TG.

I had a note from some kind person who would like a light put on the Grotto in the Clara Road.

Recently I got a book from one of my granddaughters, which I think is quite different. In her thirties and married with a growing family, she found this lovely hard-back on line and got one for me and her Dad as well. It’s a book with a question at the top of each page, leaving the rest for me to write my answer. I think everybody of my calibre should have one. It’s the best way I know of painlessly handing on our past to those coming after us. Questions like “Tell me about the place where you were born”, “What did you want to do when you grew up.” The list goes on, pages are not numbered but I’d say it’s well over a hundred.  There is no limit to what you to say nor rush to finish it.  The cover says “Dear Nan”, but it could refer to anyone.

Sean Radley who is with  us in Spirit the whole time, wants us to tune in to Cork Music Station tonight at 9.30 for a very special progam with lots of local input. Many thanks Sean for your wonderful interest in all we do. Every day we meet someone who asks, ’How is Sean Radley’.  Everybody wishes you the Best.

A lovely  bird flew into my garden this morning when looking up my bird book  discovered I had a lovely collared dove. I was sorry to see him fail to feed off my bird nuts, so he soon gave up and flew on.

Mass every morning at 10, preceded by the Rosary at 9.40. very often enhanced    by Deirdre on the organ. Well done to Edel and Our Church Choir who are  operating on severely reduced numbers and sparing no effort to enrich our church services, especially  as we enter Holy Week. Their long hours of practice are much appreciated judging by the round of applause  they get from the congregation.

Ring Mary Sheahan, if you would like to go on a four day coach tour to Donegal on Monday, June 13. For as little as €400. Calling to many interesting places along the way including Knock Shrine.

Monthly Community Council Meeting will be held at the Wallis Arms Hotel tonight starting at 8.30.

In closing I want to wish you all a very happy and safe Easter Fest. Be on the look out for those in need around you.    Slán agus beannacht.