After trying to find English-speaking vocations in England , the Sisters of the Infant Jesus – Nicolas Barré (EJNB) left for Ireland in 1908 . And set up Drishane Convent in 1909 in order to supply a growing need for Sisters who were fluent in English in communities in Asia , and more particularly in Malaysia. Looking to make Drishane better known in Ireland, in 1910 the sisters published postcards, in black and white, and also colorized.

The Infant Jesus Sisters have now published these 18 postcards … some which we have seen before, others we have not. As an example, the postcard below shows the castle (covered in ivy) to the left of the two trees, and the main house between the two trees.

To see the photos,  go to the IJS archive website, and you will find the photos in the embedded PDF’s (which you will have to scroll down through) 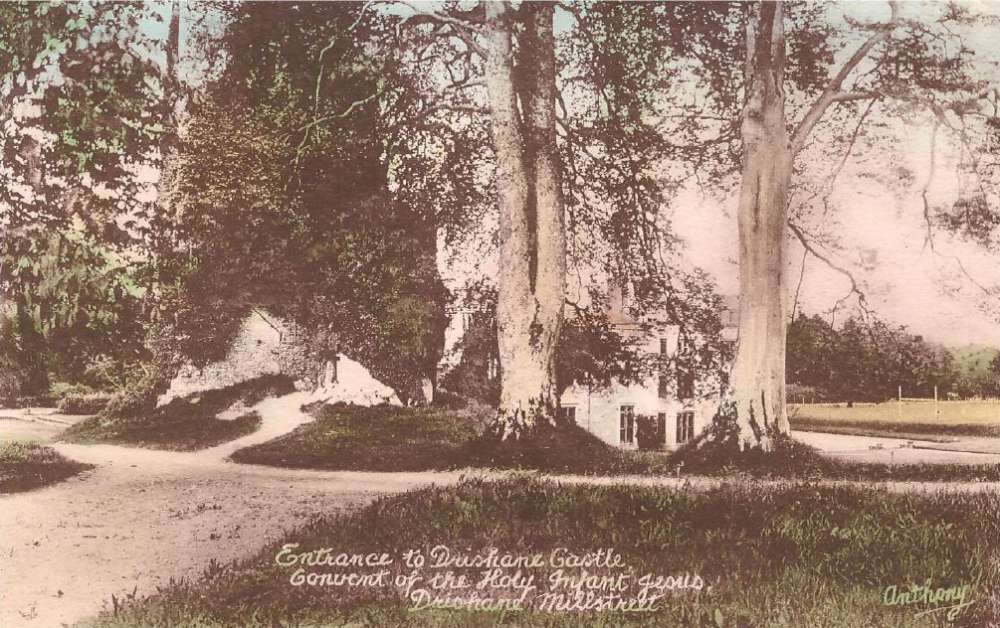 According to Cornelius Traynor on facebook, The photographer Louis Anthony had a connection to Drishane, in that his wife Julia’s sister was a nun in the congregation. His photos of the place are some of his non Kerry subjects and are rare.

Prior to the present century, photography was carried out only on a small scale in the town. In 1904 Louis Anthony came to Killarney from Alsace-Lorraine and served as chef at the Royal Victoria Hotel where, in the splendour of an old-world ball-room, noblemen and their ladies waltzed to the immortal music of Johann Strauss. After a time he opened a guest house in Main Street and carried out photography on a part-time basis. Eventually he opened a studio in High Street, working as a full-time photographer.

During the tourist season he would travel to the Gap of Dunloe (a distance of six miles) and back daily by pony and trap. Later he went by bicycle, and finally he purchased a motor car to do the journey. He would develop the photographs and take the finished pictures to Ross Castle, one and a half miles away, in time for the visitors returning by boat from The Gap.

In this and many other ways he revolutionised the photographic business in the town. Children who made their first communion , and others who made their confirmation, as well as newly-weds and many about to embark on the emigrant-ship, would visit his studio to have their photographs taken as souvenirs of such special occasions.

All who visited the studio found Louis Anthony a most kindly man, who gave to all his whole-hearted and expert attention and to each individual an air of importance so necessary to the taking of a good photograph. He died in November 1933.

His colour photo-views of Killarney were a very high quality and have now become so scarce that they may well be regarded as antique.

His predecessor in the photography business in Killarney was James Healy, and Before him the business was carried on by Michael O’Callaghan.

1901 census – High Street also in the house were his sisters in law Ellis, Bessie, and Molly. Was one of these the nun?

1911 census – a photographer and dealer in general fancy goods. Aged 44.

Louis died from TB in 1933 at High Street in Killarney

1 thought on “Drishane Convent Postcards from 1910”