He defeated for years, all the limbs of the law,
And for daring and pluck struck each deepest with awe.
And the threat of his name spoken ever so tender,
Had made the most mean-hearted grabber surrender.
Twenty five times at least in the dock did he stand,
And was never betrayed by his brave hearted band.
Though often was offered a bounteous reward,
For a member to swear on this chivalrous Bard

And each time as he nobly escaped from the dock,
He commenced with fresh vigour to comfort his flock.
The widow and orphan and all in distress,
And compelled the base tyrant their wrong to redress.
The agent and bailiff his rule did deplore,
Sure he kept the vile sheriff from many a door.
For coercion and peelers had failed to retard,
The invincible sway of this conquering Bard.

But like the career of the great Hugh O’Neill,
Which was crowned with success till the Siege of Kinsale.
A traitor at last had appeared in the fold,
Who deluded his leader and sold him for gold.
And the Judges of Ireland who never were slack,
To consign to the prison, the rope, and the wrack.
A rebel, if he were as just as the Lord,
Gave a score and four years to the veteran Bard.

In the cells of Mountjoy, he is left to bewail,
The afflictions and wrongs of the sons of the Gael.
But the day’s not far off when those tyrants so bold,
Shall surrender that freedom they dare not withhold.
When he and his comrades, in triumph and glee
Can revisit the homes which they fought for to free.
While each hillside in letters of fire will record,
And proclaim the release of the warrior Bard.

But should faint hearted cravens attempt to condemn,
The intrepid exploits and adventures of him.
And the terrors he struck into traitors and all,
Who evinced a desire to keep Ireland in thrall.
Their cowardly aspersions are spiteful and vain,
Sure, his country’s right he strove to maintain.
So, if freedoms grand cause has been hampered or marred,
All you who love Erin “oh blame not the Bard”.

This poem entitled “The Bard” appears in the Dúchas files from Árd na Giuíse (Firmount), Donaghmore (1937),  and is about Seán Riobaird O Súilleabháin (known locally as the Bard), a  figure in Millstreet’s history who made Millstreet famous during the Land War. His fight with the landlords and land agents led to intense repression in Millstreet between 1881 and 1891. At one stage the small town of Millstreet had more than 80 armed police to enforce the law! 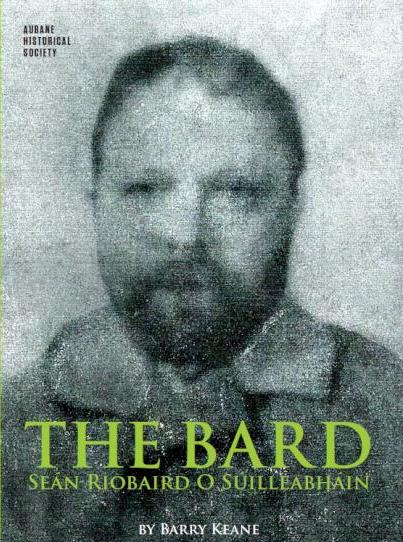 The Bard (2012) is a biography written about Seán Riobaird Ó’Suillabháin by his great-grandson Barry Keane, and published by the Aubane Historical Society.

About the author, John Honohan
[from the Dúchas Collection]

The author of the poem was John Honohan, from Derry, Donoughmore, Cork. Born 1859, died 6th May 1931 aged 72. Celebrated Land Leaguer, Moonlighter and leader in the parish of Donoughmore. Honohan was a poet of merit and great fertility composing some fifty or more patriotic songs of which a few are appended. Others are still in the possession of his family in Derry. The poet himself spent seven years in Mountjoy for moonlighting activities.
About the same time Thomas Walsh, an uncle of the present Domhaill Dorgan, Firmount House, Donoughmore spent seven years in Mountjoy for similar activities. Some of Honohan’s songs are
1. Thoughts and Longings.
2. The Bard of Millstreet.
3. Fallons Election.
4. Behind Prison Bars.
5. The pride of Donoughmore.
6. The Muskerry Bard.

2 thoughts on “The Muskerry Bard”