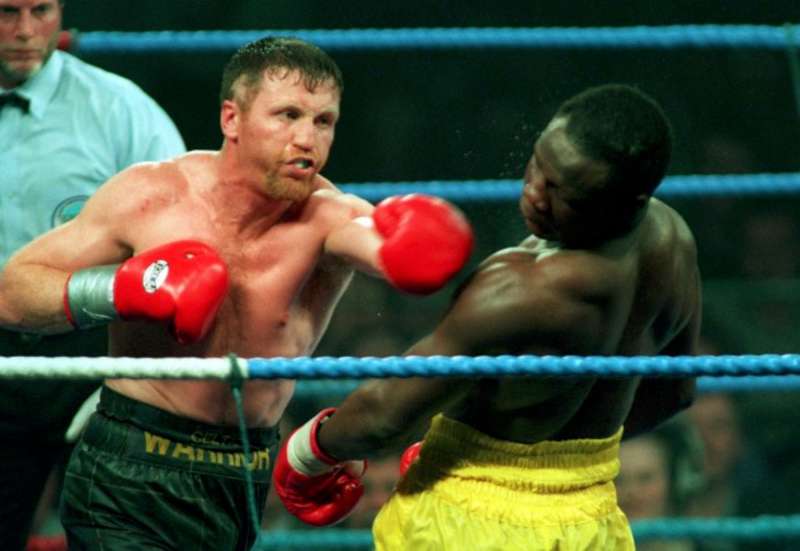 … As for how a fight of this magnitude landed in Millstreet at all, Smith wasn’t privy to such conversations at the time but contends that it must have been then-Sky Sports chief Vic Wakeling who “made the deal” with Matchroom head honcho Barry Hearn to bring their boxing poster boy to North Cork. Mind you, he also recalls sitting down with Duggan and being told otherwise.

“And actually”, he adds, “being around Noel C. before the fight, you could definitely imagine him having banged on Barry’s door or Vic’s door and saying, ‘Hey, come on, we can make a real happening here — something completely different.’ And it was completely different.

And Noel C. showed me some letters when I saw him a few years ago that he had written to Vic and to Barry at the time, and he was absolutely convinced that it was he who had made it happen. Unfortunately, Vic has passed since then. Barry is still going strong and he’d tell you he made it, of course, because Barry is the ringmaster and ringleader of everything! But I think Noel C. had a huge part to play. He was tied to the Greens Glen Arena and I do literally remember him going up and down Millstreet, the Main Street, promoting the fight.
“Even if he wasn’t the man who put it all together — and he was certainly one of them — he was still the star of the show…” [42]

Seeing as it's 25 years since Steve Collins beat Chris Eubank at Millstreet, here are a few snippets from the programme which my uncle Gerry brought back pic.twitter.com/3SZrIZ5WB1

Want to Wish my Big Brother Steve ( THE CELTIC WARRIOR ☘) & @ChrisEubank a happy 25th Anniversary of their Epic Battle at Millstreet in 1995 🥊 Probably one of the biggest nights in Irish Sporting History 👏 Respect to Both Warriors 🙏🏻🥊☘ pic.twitter.com/RkYNVokGZ5

“It is still one of the biggest nights ever for Irish boxing."

I looked back on the night with my good friend, Peter O'Donnell: https://t.co/34ohQkpLyD pic.twitter.com/eN5EsqiOWR