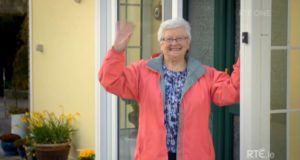 Fondest greetings everybody and I hope you are all well. It isn’t easy to open any conversation now without mentioning the Corona Virus so how can I be any different. The power of the media today is making the whole world  feel as small and as intimate as any parish or even a town land of old. In olden times, the spread of bad news should wait till after the morning trip to the creamery or on arriving at work, passing it on to people who would waste no time in bringing it out to the fields and scrioctering houses of rural areas. And the Cork Examiner was a must, bought at the local shop and taken home, from the creamery to where the whole family gathered around the boss of the house and listened with the utmost attention as he revealed the latest scoop. Reading done the paper put down and then a detailed discussion took place  weighing the pros and cons of the matter  before returning to the work of the day. If the subject was tragic or scary and worrying, there was time to tease it all out and find another angle and find strength and support in one another.  On the other hand if it was something lighthearted and funny the whole clan enjoyed the moment and had a wholesome laugh together.

Today if there is some incident be it good or bad in many cases the first place you’ll hear it from is Australia. There is always someone faster than you on the button and before you have time to press yours  the message will hit your screen from down under with maybe more on the story than you had. There is no doubt, it’s great but there is always a BUT, the family unit, as we knew it is gone and with it is the wonderful family support. Lots of people live on their own now. Every door is locked.  Bad news and upsetting messages are not easy to take  when there is no one to share it with, no one  to lean on, or thrash it out with.  The Corona virus is a case in point. Once the first account of it hit the media, it went viral. Having digested to initial shock, the fear of scarcities set in, sending the multitudes off to stock-pile. Emptying shelves  of whatever it was that they thought, they couldn’t live without, leaving others frustrated. People are creatures of habit and as such they’re frightened they’ll run out of something. It happens at Christmas, at Easter or any time we have a Bank Holiday weekend. I’ve seen it happen over and over and every time I see these wagons of food stuff leaving the Supermarket, I can’t help telling myself that they’ll never eat all that in two or three days.  The thought of wasting food scares me.

It is only now that China is closed down that we realise how much we have come to depend on them. And not just us but the whole world, and now that we have time to think about it, it is a good thing. Bit by bit we have given away all our small industries and some not so small. There was an old saying long ago, never put all your eggs in one basket.   If there is  any redeeming feature about the Corona virus situation it has to be that it will give the world a chance to look at itself, realise how it has lost the art of being self-sufficient.   As time goes by we’ll see a lot more, the mind boggles at the thought of decorations for events, toys for every celebration including Christmas, cheap clothing and so on and so on, which all came from China that won’t be available. Recently a woman told me that her daughter is expecting a baby and she advised her to get a supply of towelling re-usable nappies, or buy some terry towelling and make them, because the disposable ones may not be available.    It capped it all for me when I saw shelves in Melbourne, Australia running  out of toilet rolls and the same in some stores here. One supplier for the whole world.  Maybe that’s the way things are or should be done by the powers that be today, but I still hold on the  idea of,  “not keeping all your eggs in one basket”

Its great to see a few of our own small businesses here getting into production and taking on more staff. Please give them your support.

St. Patrick’s Day Parades are on shaky ground this year thanks to the Corona Virus scare. The bigger cities have made their choices to cancel, which is regrettable but I suppose it has to be done. However  smaller towns remain undecided. It is not a decision that can be taken lightly. Personally I hope that ours will go ahead. Both Rathmore and Carriganima are fixed to be held on next Sunday March 20th and  we are advised by our powers that be, to live our lives as near to ordinary as possible, we  wish them the best of luck. The Millstreet Parade committee are meeting tonight at the Wallis Arms Hotel at 8.30 to finalise their decision  for March 17th.

The Glen Theatre is packing them in night after night for their wonderful comedy “The Maiden Aunt”. They’re going to do it all again a couple of times. Please watch out for them and don’t miss their hilarious play. Ring 02956239.

A branch of the popular Macra na Feirme has  started  up in Millstreet. Please give it your best support. Membership is open to lads and lassies from 18 to 35. Macra  is known for its wide range of activities to suit every taste and ability. A meeting will be held at the Clara Inn on Friday night next .Please attend it well . For full details ring, 0874370175.

It is a great honour for Millstreet to be chosen, again, by An Post to feature a local scene on a postage stamp. This time featuring the well known painting, “Men of the South” which  includes the late Roger Kiely, father of the recently deceased Dermot. How proud Dermot would have been to see it.

Here are the results of this weeks lotto draw which was held at the Clara Inn on Sunday night. Numbers drawn were, 1.13,18,30, and the Jackpot was not won. €100 went to Lucky and Sharon, Drishane Rd the seller was Denis Lane and he got €50 sellers prize. €50 went to Paul O’Connor, Tanyard Wood, €20 each to Denis Bradley, Knocknagree, Derry Healy. Murphys Tce, Sheila Kelleher, Liscahane,  Denis Bradley, Knocknagree, Wattsapp and Denny. c/o McCarthys Bar, Betty Goggin c/o Graces Salon. Eileen Irish, c/o Graces Salon. Shane & Kathryn Cleary, Bush Bar, Jackpot next week €8,400 the draw at the Wallis Arms Hotel on Sunday night.

Please be reminded that weekly Pottery Classes  have now been added to the long list of activities at the Canon O’Donovan centre.  Given by Barry Fraser on Mondays.

The Season of Lent is moving on please continue to support the Eucharistic Adoration, and extra prayers and talks that are held during this Holy Time.

Our GAA Club are appealing for donations of used clothing. Bags can be added in at the GAA Hall on Saturday next March 14th , from 11 am to 2 pm.

Cullen Pipe Band will host a fundraising Cake Sale and Colouring contest at their Band Hall on Sunday after 10.15 Mass. Please support it well.

I want to say a million thanks to the Transition Year  students  of the Community School  for their most enjoyable Coffee Morning which they held at the Parish Centre in honour of International Women’s Day.Their courtesy and friendly interaction  was enjoyed by all.

Only one night to go at this year’s Weigh In in Cullen. Last night 25 people weighed in and 42 pounds weight was lost. Next week they will have the customary presenting of prizes  to those who lost the most weight and those who brought in the most money. Plus presenting the proceeds to the various charities who benefit from the annual Weigh In in Cullen.

My last word will go to the Corona Virus situation. We are all in it together, even the experts don’t know what to do ,so let us support one another in every way we can and pray that a vaccine will be found very soon  le cúnamh Dé