Below are our notes on Martin and Ellen:

Marriage of Martin Cahill and Ellen Buckley on July 27th 1886 at Derinagree Church by Fr O’Sullivan P.P. He a constable from Lisnabee, son of James Cahill a farmer. She a farmer of scaugh (skagh?) Coolcloher(deleted), daughter of Daniel Buckley a farmer. in the presence of Patrick Costelloe and Michael Buckley. (Civil Register)
Marriage of MARTIUS CAHILL of LUNABUS (?? Lisnabee) and ELLEN BUCKLEY of SCAGH on 27 July 1885 in Dromtariffe Parish, son of James Cahill and Catherine Duggan, daughter of Daniel Buckley and Honoria Anglan. Witnessed by Patrick Costello and Michael Buckley. (Church Register)

Martin is down as living in Lisnabee. I wonder if he was working at Cullen RIC station (was it open then?)? Though his parents names of Cahill and Duggan would be very local!

1911 census: Residents of a house 22.4 in Main Street (Drishane, Cork)
His family are living in the Barrack in the Square Millstreet

I wonder if Nora Teresa is written as Tess Cahill in the 1911 census, listed as a dressmaker at Main Street, Millstreet aged 18 (her projected age).

Marriage of Maurice ‘Moss’ O’Brien (1865-1948) and Margaret Cahill on June 21st 1917 at Killorglin Church by Rev James Nolan P.P. He a widower and merchant  (Postmaster & Merchant) from Killorglin, son of Maurice O’Brien a merchant, she from Killorglin, daughter of Martin Cahill a policeman. In the presence of J O’Brien and Annie Cahill.

Marriage of William Joseph McCarthy and Julia (Sheila) Cahill on April 15th 1931 at Killorglin Church by Fr. Jeremiah Casey C.C. He a merchant from 32-33 The Mall Tralee, son of Cornelius McCarthy a merchant. She of Main St. Killorglin, the daughter of Martin Cahill, RIC police. In the presence of John C McCarthy and Sheila Brien.

Death of Martin Cahill on August 25th 1932 in Killorglin, widower, 73 years, ex-member R.I.C., cerebral haemorrhage 19 days, Mce O’Brien son-in-law present at death. It is written that he was buried in Millstreet (with his wife one presumes, but maybe she was buried with her family near Derinagree)

He was born in Clare (from the census) … but his mothers name Duggan is local to here. The police records will tell us more. 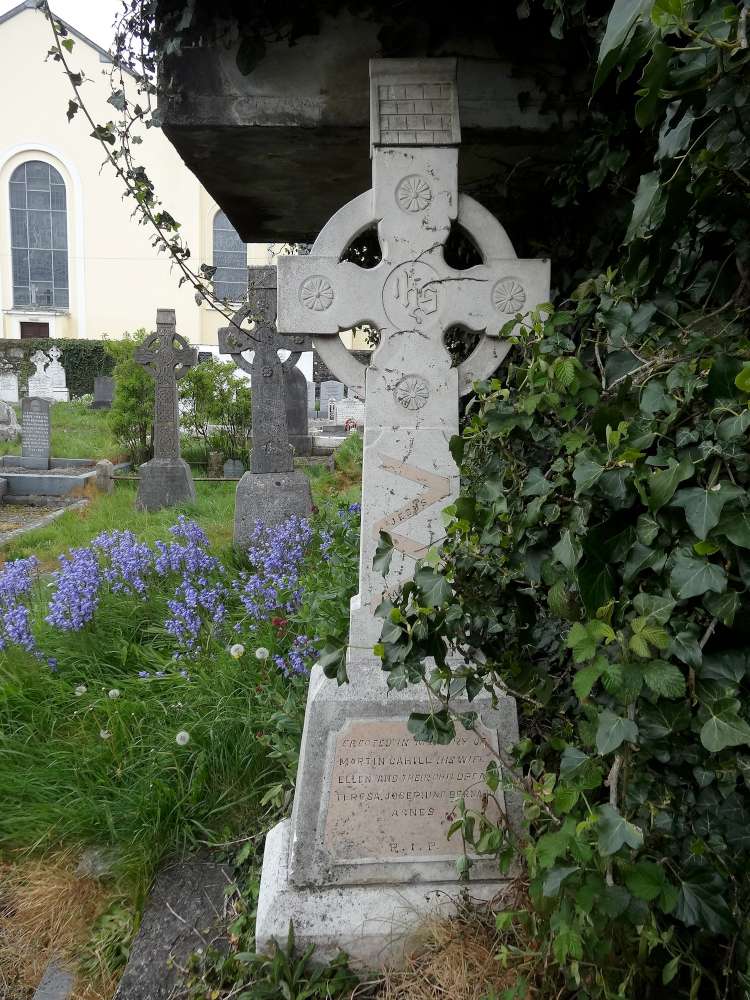 The family grave is beside Millstreet Church, right behind the old cinema. It reads [Historic Graves]:

We wonder what happened to the five children that died before the family arrived in Millstreet:

(Martin’s wife’s family): Her parents were listed as Daniel Buckley and Hanoria Angland of Skagh in her marriage records:

His wife Ellen was from Skagh, which is about a mile north of Derinagree  Church (Map):

Marriage of Timothy Murphy and Kate Buckley on January 7th 1902 at Millstreet Church by Fr Charles O’Sullivan. He a farm servant of Ardnageeha Cullen, the son of Timothy Murphy (deceased) a farmer, she the dairymaid of Ardnageeha, daughter of Daniel Buckley (deceased) a farmer, in the presence of Lizzie Murphy and William C Casey (civil register).
Marriage of TIMOTHEUS (TIMOTHY) MURPHY of ARDNAGEEHA and CATHERINA (CATHERINE) BUCKLEY of ARDNAGEEHA on 1 January 1902 (ASSUMED), the son of Timothy Murphy and Elizabeth Casey, daughter of Daniel Buckley and Honora Angland by Fr. C O’Sullivan, witnessed by William Casey (Catholic Register)
1901 census: Kate  and Timothy appear in the same house for the 1901 census, where they are listed as “cousins” !!! 🤔. I don’t know where they are for the 1911 census
Timothy Joseph Murphy (1867–1924 Knocknagree) and Catherine (Kate) Buckley (1870–1951, Knocknagree) moved to Knocknagree where they had a pub. They had 6 children:- Lizanne Murphy (1902–1992 Gneeveguilla), Timothy Joseph Murphy (1904–1951 Oregon), Nora Murphy (1906–1967 Knocnnagree, m.Denis O’Connor), Mary Murphy (1907–), Fr. Daniel Murphy(1909–1971 Salesian College, Battersea, London), Michael Murphy (1910–1979 Tralee, m Winifred Rose Sheridan, m. again) [ancestry]

=====
On his death in 1932, aged 76, compensation went to his daughters Miss Eileen Cahill and Miss Mary Cahill.

1885: Constable Martin Cahill of Clonbanin brought Denis Sheehan of Kiskeam for being drunk on the public road at Clonbanin in the said county on 25th Dec 1885

1886: He was still in Millstreet on Saturday September 4th 1886, where he was the witness to a Patrick Kelleher of Cloghoulabeg being drunk and disorderly at Liscahane. This was the day before the fair day, so likely he was drafted in for the influx of people.

14th Jan 1918: That the defendant did unlawfully use a vehicle on the public road at Millstreet in said county without having a lighted lamp attached thereto, after about 6:50pm on the 14th Dec 1917

Mentions in the newspapers:

ALLEGED STABBING. Millstreet. Tuesdav. A special court was held to-day, before Dr. R. R. leader. to hear a charge of stabbing against two brothers, named John and Cornelius Buckley, blacksmiths, of Clonbanin. Mr. Beirne. D.I., Millstreet, said the men present in custody were charged with stabbing Denis Duggan, of Clonbanin West, at Lackabane, near Millstreet, on the night of the 1st of August. A deposition was made, and there was not a fully constituted court, there was nothing- be done but adjourn the hearing to next petty sessions. Mr. J.J. Lenahan, solr.. said he appeared for the accused, and on the hearing of the ease it would resolve into one of common assault. He was sure Mr. Bierne would that. He was prepared give respectable bails for their attendance. They were the sole support of an aged father and mother. There being some difficulty in proourng sureties. Mr. Linehan asked to have the amount reduced from £4O and two bails of £2O. to half the amount, the act the outcome of common brawl. They were cr.nking together, and were friends. The magistrate to reduce the bails, and Constable Martin Cahill gave formal evidence of the arrest of the prisoners on the Ist in-st., on charge of stabbing. They were m custody since. On the bail bonds being perfected, the prisoners were released, appear at next petty sessions. [1]

Q. When did he and his family move to Killorglin? His wife died here at Minor Row in 1923.