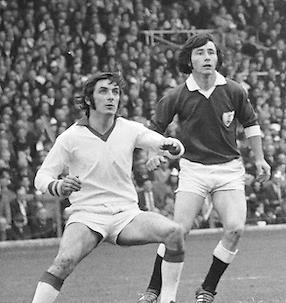 Four Millstreet men were on duty during that famous September day in 1973. Starring in the half~back line was Connie Hartnett as the Sam Maguire Cup was reclaimed by the rebels.
Born in 1951 Connie Hartnett was always destined to be a footballer as his mothers first cousin was Din Connors a member of the All~Ireland winning Cork team of 1945.
Ironically, Din Connors played at left~half back against Cavan in that final, the next time Cork would win an All Ireland another Millstreet man Connie Hartnett would be playing in the same position.
Growing up and playing with Millstreet, who were strong at underage level at that time, Con was picked for the Cork Minor team.”I was very lucky to be picked on such a talented team that won back to back All~Irelands in 1968 and 69.
“After coming out of minor we were still together as a team and landed back to back under 21 All~Ireland’s in 1970 and 71.”
“It was in 1971 I made my senior debut with Cork, we beat Kerry in the Munster final but Offaly stopped us in the semi~final.
1972 we got to the Munster final again but were beaten by Kerry on the day. The following year all my dreams came true it was amazing a fantastic year we had a very good team. Guys like Billy Morgan, Ray Cummins, Frank Cogan, Declan Barron, and what made it all the more special was to have the three Millstreet lads, John Coleman, Dinny Long, and Humphrey Kelleher.
I had grown up with these lads and here we were winning an All~Ireland senior title together. We had a very good championship beating Kerry in Munster, Tyrone in the semi~final and Galway in the final on a scoreline of 3~17 to 2~13. “The homecoming was awesome on the Monday night we paraded through Cork City with thousands out to greet us, but it was
the Tuesday night that will stay in my Memory forever, we were brought through Millstreet town with everyone out cheering us, to have four players on that team was very special to people in Millstreet.”As champions we were invited to America to play the All-stars. We also played in Wembley grounds tournament in England, they were great tours and I used to
share a room with Billy Morgan who to this day is a great personal friend of mine.”I also represented Munster in the Railway Cup but never won a medal.”

In 1974 Cork again beat Kerry in the Munster final but were beaten by underdogs Dublin in the semi final.”That was a huge disappointment to us but we can have no complaints, they were the better team on the day and went on to win three All~Ireland titles after that.” Con retired from inter~county football after that defeat in 74″. I decided to go I had
been very lucky since 1968 between minor and under 21 and senior I had won five All~Ireland medals and was beaten for a sixth in a junior final in 1970, so you cannot top that”
I was brought back for the official opening of Páirc Uí Chaoimh in 1976 and played in a challenge game against Kerry .”

Con continued to still play for his beloved Millstreet and won a senior football league title Kelleher Shield in 1971. Con moved and lived in Kanturk for ten years before moving back to Millstreet where he works as a cattle dealer, a true gentleman and football legend from that golden era of Cork football.

1 thought on “An Interview with Con Hartnett”