Hello, I visited Millstreet this September but couldn’t quite catch up with Mr. Radley. My great-grandmother was Bridget Mary Francis Kelleher and was born in Millstreet 1 FEB 1861. Her parents were Timothy Kelleher and Johannah Murphy. She and her husband, David Morrissey (or Morrison) emigrated to the US in 1889. I’d love to make contact with any relatives and to know more about the family. Thanks for any help anyone can provide. [1]
Best wishes,
Michael Morrissey
====
The below information is added by the admin to give some context, and to figure out who her family were. Easy enough to track Bridget, but we’re at a bit of a loss to figure out immediate family:

Baptism
Baptism of BRIGIDA (BRIDGET) KELLIHER of DRISANE BEG on 2 February 1860 (born on the 1st) to Timothy Kelliher and Johanna Murphy, by Fr. Thomas Nolan. Sponsored by Denis Murphy and Ellen Kelleher.

Siblings
Baptism of JULIA KELEHER of DRISHANBEG on 2 May 1862, to Timothy Kelleher and Johanna Murphy of Drishanebeg, at Millstreet Church by Fr T. Brosnan. Sponsored by Daniel Murphy and Abigail Shea. see more below:

One ancestry profile lists her siblings as Mary Kelleher (1853–1926), Jeremiah Kelleher, Julia Lucey, Hannah Sweeney Lucey, Norah Kelleher … but with no verification as to this (will try to get verification)

Marriage
Marriage of David Morrissy and Bridget Kelleher, both of 77 Old Georges St, Cork. He a victualler, son of Michael Morrissy (dead), farmer. She the daughter of Timothy Kelleher, a farmer. Witnessed by William Morrissey and Julia Cunningham.

Emigration to America
David and Bridget moved with their two children Mary and Peter to Massachusetts in 1889.

Her parents and siblings?
No information on what happened to them but this might be it:

I wonder if her father went by the name Thomas in later life? (not a too uncommon thing in those days)
The reason is that a Julia Kelleher of the same age, and from Drishanebeg married a James Kelleher in 1886, her father was Thomas, and mother Johanna. Also confirmation from Julia’s descendants that she had a sister Bridget:

1901 census: Residents of a house 3 in Drishane Beg (Rathcool, Cork). James and Julia have 7 children:

John (aged 13 in the 1901 census above emigrated to Boston in 1910 with his future wife Margaret Buckley, and they had eight children. He married again and had another child. He died in 1958 in Watertown, Boston. (further details below)

1911 census: Residents of a house 1 in Drishane Beg (Rathcool, Cork). James and Julia have now had 10 children (7 alive):
The father’s absence from the 1911 census might be explained that he was in Boston 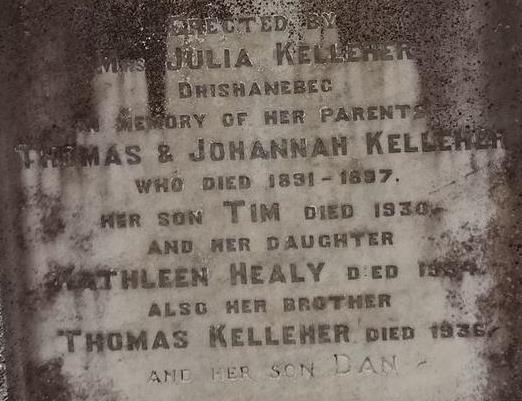 The Kelleher home at Drishanebeg

Their home was where Roches farmyard is now (sold in 1952). Catherine (Kathleen) married Denis Healy of the Square (the jeweller’s house, uncle of Conchubhar Ó hÉalaithe) in 1927, and they had two children Connie and Eileen who both went to America. [Healy grave in Drishane]

John was born on May 27th 1887 at Drishanebeg, son of Julia (Keleher) Keleher and James Kelleher a farmer

John emigrated from Queenstown on the SS Zealand and arrived in Boston on April 27th 1910 (mother Julia Kelleher, Drishanebeg). His mother paid for the ticket and his destination was 16 Allen Street, Boston … his father’s house!!!  He is 5’8″ tall, fair skin, dark hair, and dark eyes. [a]

Also on board was Patrick Barry of Coolkerane, but maybe that was a coincidence.

John married Margaret Buckley on May 3rd, six days later. They had:

1920: Living in Franklin St., Cambridge, MA. working as a teamster for Teaming Contractors.

1930: Living with the family at Kinnard Street, Cambridge, MA, a freight handler for express.

1940: 194 School Street, Watertown, Middlesex, MA. He was a Freight Handler for a Railway Express. Living with his wife Catherine, and children Thomas, William, and Maureen