Rathcoole Aerodrome (ICAO: EIRT) (also called Rathcoole Airfield) is situated just north of Rathcoole Village, about 9km north-east of Millstreet. It has a single grass strip (approx. 450m in length and 18m wide) running to the south of the River Blackwater.

This aerodrome is licensed by the Aeronautical Services Department of the Irish Aviation Authority.

Rathcoole airfield was opened during the 1960’s by the McCarthy Family who who ran a popular and much needed pipe and tile business in Rathcoole. It was at a time when air travel was in its infancy and the development created quite a stir in the locality. It is owned and maintained by Donal Mc Carthy.

In August 2019 the country’s first charity air ambulance service, led by the Irish Community Rapid Response charity, started operating from the Aerodrome. The service is centrally located for all of Munster and deals with severe medical emergencies that need to be transferred to hospitals quickly.

See more at ICRR.ie, and also in our news pages

How to get there?

Rathcoole is about 9km north-east of Millstreet. Directions are HERE [GMaps] 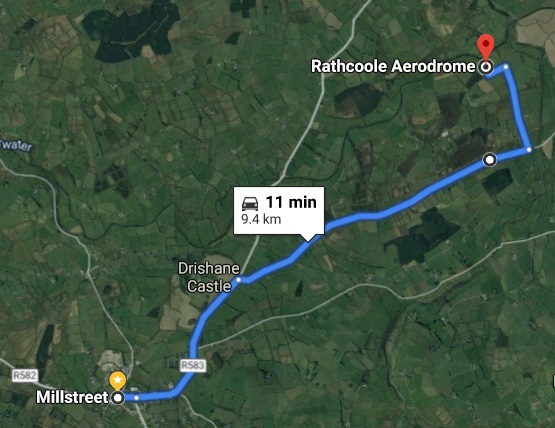