The hard work being made by the Juvenile Club really paid off this weekend at the All Ireland Youth Cycling event held by Lakeside Wheelers in Mullingar. In total we had 11 SLCC juveniles taking part from Under 11 right up to Under 16. In the Time Trial held in the village of Multyfarnham our Under 11 boys team of Nicholas Buckley, Keenan Dennehy and Sean P Fleming rode well just losing out on the Team prize by 3 seconds demonstrating how much they have developed over the last 9 months. Amy Fleming won Bronze in the Under 14 girls TT with Ben Murphy 4th in the Boys Under 16 (again missing out of the podium by a second). Amy went on to win 2 more bronze medals in the Road Race and the criterium. Ciaran Finnegan Aidan Morley Dinny Murphy and Darragh Dennehy completed well in the boys under 15 14 and 13 events. Kate Murphy (Under 12) rounded off an excellent weekend for SLCC winning two Bronze medals in the Road Race and the criterium. All told an very strong weekend of racing by the SLCC Riders – thanks to all the coaches and parents for their support. This week Ben Murphy travels to Austria as part of a six man Ireland Team in the five stage International Radfjugendtour Oststeiermark road race. Ben’s team mates hail from Donegal (Errigal) Tyrone (Island wheelers) Dublin (Orwell) Meath (Bohermeen) along with another local rider David Shine from O Leary Stone Kanturk. Best of luck to the team and their backroom staff for the week. Next up for the juveniles is the Kerry County Championships and the Munster Road Championships this weekend. 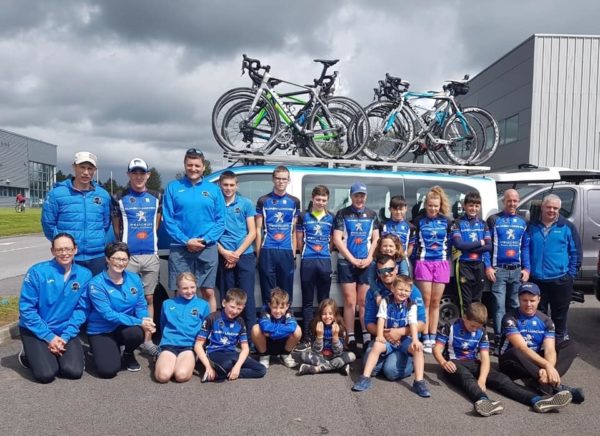