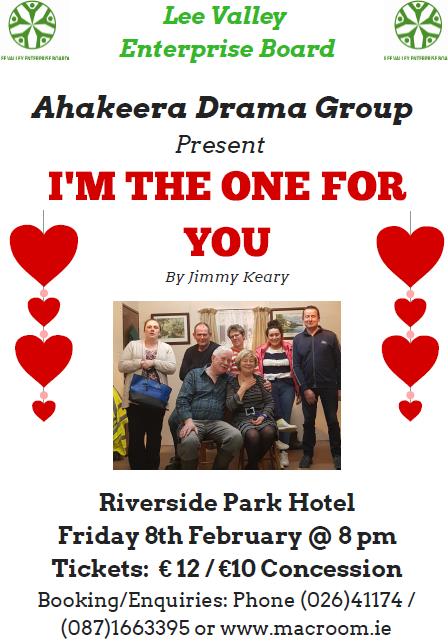 Upcoming Theatre Production “I’m The One For You” by Ahakeera Drama Group which takes place in The Riverside Park Hotel on Friday 8th February at 8 pm.

Ahakeera Drama Group, Dunmanway are on the road with their three-act comedy I’m The One For You written by Jimmy Keary. A love story set in rural Ireland the cast includes some familiar faces and new members. Gerry O’Malley is a widower and farmer living alone. Dorrie Sinnott is a widow, who comes in to clean for him once a week. Dorrie fancies Gerry and has high hopes that wedding bells will ring for them both someday. But local bachelor farmer, Jack O’Dowd fancies Dorrie, having courted her some years previously before she was married. However, Dorrie has no time for Jack and dismisses his advances every chance she gets. Then Gerry meets Ruth Hickey, a newly-arrived divorcee in the area, when she approaches him to hire his lorry for a forthcoming ICA event. There is an instant rapport between them. Matters are further complicated by Gerry’s son-in-law, Hugo Carter, who helps in the theft of Gerry’s farm machinery to pay off his debts to some very unsavoury characters. As Dorrie’s advances become more amorous and Jack becomes more jealous, Gerry realises he will have to do something about the situation, but his colour-blindness and some mixed-up invitations only make matters ten times worse. Who will end up with the partner of their dreams? If you want a good laugh and some feel good entertainment Ahakeera Drama will provide it.