Last weekends Stonethrowers Rally in Tipperary produced some great results for the local crews that made the trip to Clonmel to compete in the one day Event which was the fourth Round of the very Competitive National Championship. T|he Event comprised of a 3×3 Stage format resulting in 9 very challenging Stages laid on by Tipperary Motor Club. There was success for Millstreet’s Sean Moynihan /MacKierans in their Ford Escort Mark 2 who came out on top of the Class 12 Results after leading the Class from the very first stage of the day,while another Local Crew in the form of Colin Philpott/Declan Casey competing in a Suzuki Swift emerged victorious in Class 23,while Derry Long swapped from the driving seat over to the Navigators Seat for this Event and guided Colin Roche in his Toyota Starlet to 1st in Class 11R, the Rally was won by Josh Moffett from Monaghan in a Ford Fiesta WRC who was in turn followed home by Donegal Man Declan Boyle in a similar Car with Moffett having a winning margin of just 7 Seconds after a hard days competition. Roy White was the top Tipperary competitor and he went on to finish 3rd overall also aboard a Fiesta WRC with Dromtarriffe Man James O`Brien as usual occupying the Co-Drivers Seat for White, so another good weekend was had for all the local Competitors who were competing in Clonmel. Round 5 of the National Championship will take place in Sligo on next Sunday August 19th.

Pictured below is Sean Moynihan in Action and Colin Philpott and Declan Casey being presented there Class 23 Award by John Ward of Tipperary Motor Club. there is also a Youtube link of Colin and Declan in action here at  https://youtu.be/5yHefer95qs

(Photos Supplied by Fokus Photography and Declan Casey and Youtube link by Tossie In Car Camera`s.) 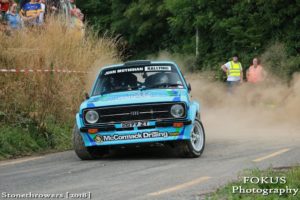 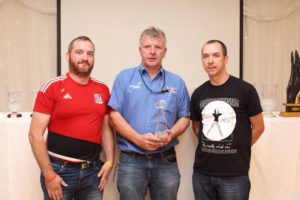