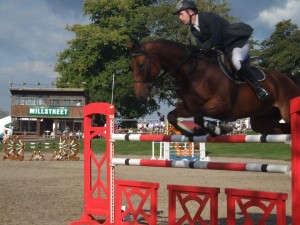 Millstreet Horse Show finished up yesterday after five days of enjoyable show-jumping. There was a buzz around the Green Glens, added to by the lovely weather all week, and especially the blistering sunshine on the Sunday. Added below are some images that may give a sample of the atmosphere. It was good to see the show back on the calendar, and hopefully it will get bigger and better again next year.

Update: PHOTO-Graphics, the photo studio based at the West End in Millstreet, have made available hundreds of photos from the show on their website

As Show Jumping Ireland held firm over its threat to fine and suspend members who take part in the unaffillated Millstreet Horse Show, crowds flocked to the Cork venue last week.

Entries at the event averaged at 800 a day while horseboxes filled the car park. Trade was reported to be good in young horses and ponies in particular.

Breeders from all over the south flocked to the show, with some reporting it as their last chance to shift stock before the winter.

The only thing to put a down beat on the event was the letters of warnings, fines and suspensions that will be sent out to all who have competed.

from independent.ie:
HE first letters relating to suspensions and fines for riders who competed at last weekend’s Millstreet Horse Show are expected to be posted from Show Jumping Ireland (SJI) headquarters in Naas today. SJI officials will also be subject to censure for their involvement in the fixture.

SJI is the national governing body for Irish show jumping and throughout this year its members have been constantly reminded of the serious sanctions facing anyone who chose to participate in unaffiliated events.

Millstreet Horse Show has not been affiliated to the SJI since 2008, and last weekend’s fixture clashed with the SJI National Championships.

Both events attracted big numbers, but the majority of Ireland’s top riders supported the association’s show, which concluded with …

interesting, because from talking to people that had horses at both shows, they all said that the atmosphere in at the SJI CoilÓg was dead.

It was a glorious day at Millstreet today!  I am wrecked after a long but very enjoyable show. Yesterday I jumped Serpent of Lux and Caloux z in the young rider grand prix. It was a big track and with thirty two starters there were only nine clear. I had some luck on the day and