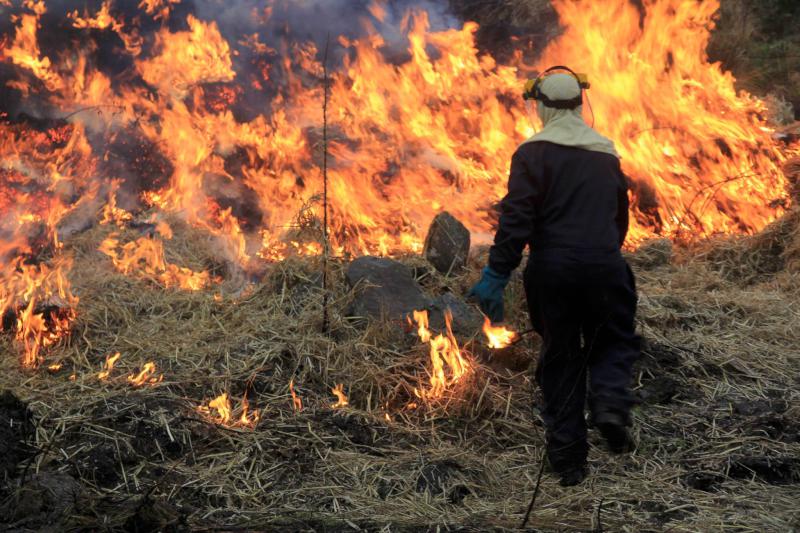 A Burning Issue … at Millstreet Country Park this week during a demonstration to show landowners how to burn safely for the sustainable management of our uplands.
In Pictures this week has nearly 40 photos of scenery, wildlife, people, unusual things and more, all taken in the Millstreet area this week, and published on social media. See them below:

People have been doing quare things at St.John’s Well (though i’ve heard of worse)

The days are short now for the crows to scavenge
https://www.instagram.com/p/Bbm9lflBPvE/

On the Clara Trail
https://www.instagram.com/p/BbkWx3zB0SQ/

Congrats to Annmarie, who came frist in Theology Specialism at Mary Immaculate

The Millstreet Talent Show kicked off in Carriganima

Spoke in Dail last night in support of FF Motion on Rural Crime – we are calling for greater resources for Gardai, and stricter bail laws and electronic monitoring of repeat offenders @C103Cork @Corks96FM pic.twitter.com/AbHIbV0gXu

Los Zarcos have new sponsors – Herlihy’s Centra, while the Malpaso, a long term backer is on the back of their new set of jerseys

Great 2-1 away win this evening against table toppers @Lakewood_1 .@Murphy5Michael and @lanMurphy2 on the score sheet.
A few tops saves from @Dylan_O_Leary to keep us in it.
A big thank you to Herlihy's Centra for the sponsorship of our new set of jerseys. pic.twitter.com/eRmGCLdiM1

Also a big thank you to our club sponsor from day one The Malpaso Bar who also helped sponsor our new set of jerseys. pic.twitter.com/S3ntyVMpmi

Noel O’Connor was in front of the lens during the @ReflexPillow shoot in Cork.

Behind the scenes @insta360 shoot to make sure we are all on the same page during the @ReflexPillow shoot in the lovely Cork city pic.twitter.com/pAHVGSxGiE

November Reflections – A passing train stood out next to the small lake on the Glebe, as darkness descended quickly afternoon around 4.30pm

November Reflections – A passing train stood out next to the small lake on the Glebe, as darkness descended quickly yesterday afternoon around 4.30pmhttps://t.co/DcQXAG9RpL pic.twitter.com/6ufiAGpwTa

Video: Dan Joe O’Keeffe had a few words to when Conor O’Callaghan brought the All Ireland and Munster cups he had won over the last year to the parish

Best of luck to the Banteer Glen Theatre Drama Group on their opening of "Off the Hook" tonight. pic.twitter.com/Laj6ujblaz

Fr. James has some lovely photos of the recent dusting of snow

Getting ready for the Millstreet Christmas Market

Hurling and snow rarely go together

Cork Wildfire Co-operative Group, of which RaptorLIFE is a partner, organised a vegetation management and controlled burning demonstration at Millstreet Country Park

At the recent customer day at Reen’s Pharmacy

Black Friday … according to Tom

A rare one in the Square