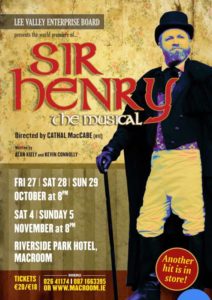 Lee Valley Enterprise Board Presents the World Premiere Of

As a follow up to last year’s hugely successful Autumn Musical, Alan Kiely and Kevin Connolly have created another fantastic Musical which has to be seen. Featuring a stellar local cast, including Seán Óg Ó Duinnín as Sir Henry, we are delighted to announce that this production will be directed by the brilliant Cathal Mac Cabe (RTE).

Based on true events, ‘Sir Henry’ tells the farcical story of the misadventures of Sir Henry Browne Hayes, the notorious Cork based play boy who sought to gain the hand of the young heiress Mary Pike as a sure cure to his financial woes by nefarious means. This man’s actions caused scandal throughout the British Empire in 1797, under the palpable tension of insurrection in Ireland and set against the backdrop of revolution in France and America.

This supremely talented local cast were involved in last year’s production so we advise early booking as another hit is in store!

Any profits the Lee Valley Enterprise Board make from shows will go back into local projects, including the restoration of the Church of Ireland in Macroom to create a cultural & tourism amenity which will hugely benefit the area.