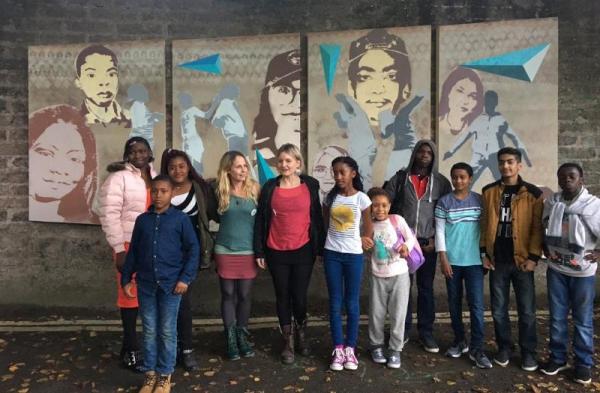 Arriving Into View is an art project that invited teenagers living in direct provision centres in Cork City and County to work with the Glucksman and practicing artists over a six week period in Autumn 2017.

Throughout the sessions participants engaged in projects that investigated ideas of personal journey. Teenagers explored the processes and techniques involved in communicating stories and messages to large audiences while working with different mediums and artists.

The project invited 15 teenagers (ages 13-17 years) from direct provision centres in Kinsale Road, Glounthaune, Clonakilty and Drishane Castle to work with practicing artists. This was an opportunity for these teenagers to interact with artistic ideas and mediums and to discover their own creative and imaginative capabilities away from their prohibitive surroundings.

The culmination of the project was last Friday’s tonight’s public display of a large scale mural created by the group in Fitzgerald’s Park as park of Culture Night. It will remain on display until October 8th.

#CultureNight On @drivetimerte this eve I report on a @glucksman project where teens living in #DirectProvision use art 2 express themselves pic.twitter.com/VETbRg0alu

Arriving into View will be unveiled at 5pm this evening in Fitzgerald's Park! learn more about the project here https://t.co/sDcUj32Sej

If you didn't get a chance to see Arriving into View in Fitzgeralds Park last night it will be on display there until October 8th! pic.twitter.com/ueE1phhYsZ

Wondrous film portrait by @UCC of #Cork city for #CultureNight. Proud to see @glucksman as gallery and civic space https://t.co/9LRiRUmGha