Anne Maria Lyons has kindly informed us of just some of the splendid success stories from this year’s Fleadh Cheoil na hÉireann in Ennis over the weekend.  We also thank Anne Maria for the attached pictures taken in Ennis.  Patrick Buckley (pictured holding the winning cup on left) and Claire Lyons (pictured at centre front) were in the Under-15 Céilí Band who won the All-Ireland while Darragh Twomey was in the winning Under-18 Band.  Music Teacher Alan Finn is pictured in front.  We shall later feature the amazingly successful Shandrum Céilí Band who made history in winning the All-Ireland Senior Band Event for the Third Time! Sincere congratulations to all the wonderfully talented musicians.  This also includes Katie O’Sullivan of Cullen winning in the Under-12 English Singing and Diarmuid Cronin of Laught, Rathcoole who won the Under-15 Story Telling Competition.  Click on the images to enlarge.  (S.R.) 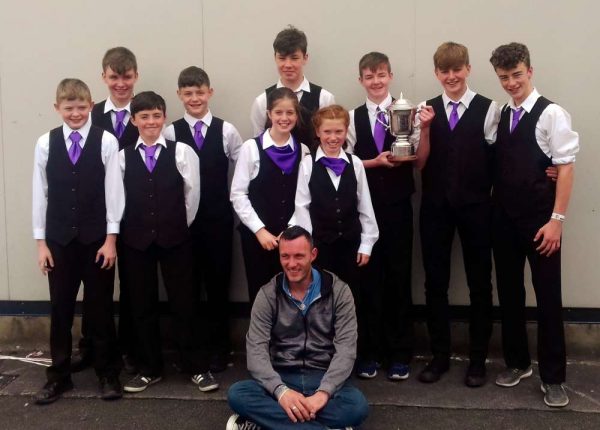