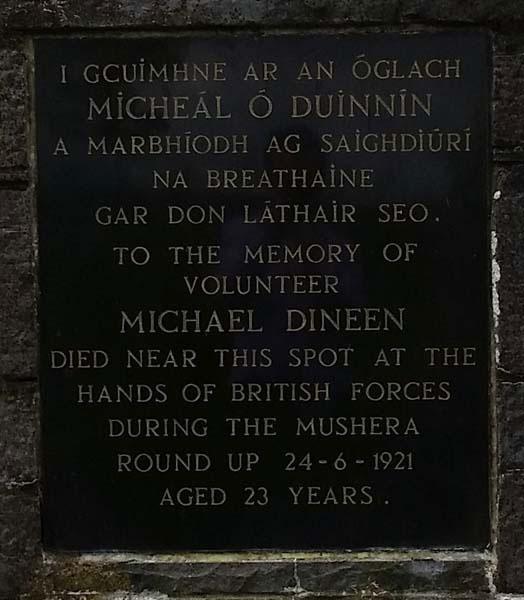 “About 7 a.m. on Friday, June 24th., I noticed some Auxiliaries and a policeman at a little distance from my house. I have since ascertained that the policeman’s name was Dowd. I called my brother, Michael, who was in bed. He got up and dressed, and was saying his morning prayers when the Auxiliaries came in. They questioned him and charged him with being in the Rathcoole Ambush on the previous week, and with being an officer in the I.R.A., all of which was untrue, and which he denied. Then they took him out of the house and one of them went to his room, searched it and took some money. When this man came downstairs he ordered my brother to be brought in again, and questioned him about Sinn Fein, etc, and said: “I’m going to shoot you because you must be an officer in the I.R.A.” “If you do,” said Michael, “I can’t help it. I suppose you shot as innocent men as me.” He ordered Michael to be brought outside
again. “We heard Michael shouting.” “My wife and I begged that Michael would not be shot, but the door was shut on us. We heard Michael shouting as if he were being beaten. My step-son went out, and he saw two Auxiliaries shooting my brother. He also heard them telling Michael to run, but he did not. My wife went out, and three men in uniform told her she had better go into the house again. She heard a good deal of firing as she returned to the house. Shortly afterwards two Auxiliaries came into the house, and one of them told me they had shot my brother, that they had turned the machine-gun on him, and he ought to be dead by this. He told us bring him to one of the sheds and put him in a coffin, and bury him, and said they would report the matter themselves, and that I need make no report. The man who said this was the man who had questioned Michael previously and who had taken the money. I can identify that man. The policeman named Dowd was present during the whole proceedings. Terrible Wounds. “When I examined the body of my brother, Michael, I found that one of his legs completely shattered at the knee. There was no wound or any mark of gun fire here, so the leg must have been broken when he was beaten. His back was covered with bullet wounds, and nearly all the blood was drained from his body. There was a long cut in his vest, and a large open wound in his breast, which I thought was caused by a bayonet. “I have never been asked to give evidence at any inquiry into my brother’s death. (Signed) Daniel Dineen. Ivale,. 3rd. July 1921 (brother of Michael Dinneen)

Note: The Rathcoole ambush of 16 June 1921 by the Cork No. 2 Brigade was followed by ‘the most extensive and concentrated comb-out of an area ever undertaken in the South’ by the British (the so-called ‘Mushera Round Up’); it began on 23 June 1921. Volunteer Michael Dineen was seized that morning at his brother’s house at Ivale, Kilcorney, by a party of Auxiliaries: ‘They took him some distance away and rifle and machine-gun fire was heard later. When the British moved on, the relatives of Mick Dineen found his mangled remains three hundred yards from the house. His arms and legs had been broken by the blows of British rifle-butts before they murdered him.’

He was identified as the ‘youngest son of Mrs Mary Dineen’ of Caherbarnagh in Drishane parish near Millstreet. Mary Dinneen (note the unusual census spelling (-1941)) was a widowed farmer in 1911 at Caherbarnagh; (Her husband Michael had died on May 18th 1905; [death regristation]) she was the mother of eight living children (nine born), with a daughter and three sons including Michael (then aged 13) co-resident with her in that year.  – [1901 Census] [1911 Census]

According to Matthew Kelleher, second lieutenant of the Kilcorney Company of the Millstreet Battalion, British forces—including soldiers, Auxiliaries, and Black and Tans—came close to capturing IRA Southern Division Commandant Liam Lynch and Paddy O’Brien, the vice-commandant of the Cork No. 2 Brigade, when they surrounded the Kilcorney area in late June. Lynch and O’Brien were billeted in the district at the time. ‘As a result of good intelligence work and efficient scouting, we were able to get these officers safely outside the enemy ring within a matter of hours. During this round-up Mick Dineen—a member of Kilcorney Company—was shot by the enemy, and about six members of the company were taken prisoners and later interned in Spike Island.’ See Matthew Kelleher’s WS 1319, 12-13 (BMH).

Dineen had taken part in the Rathcoole ambush about a week earlier. On 24 June 1921 he answered a knock on the door by British soldiers, who asked him where he had been on the day of the ambush. He replied that he had been thinning turnips in a field beside the house. He was then taken down the field and shot in the back with dumb-dumb bullets. His funeral was probably the largest ever seen in that locality. Dineen was buried in Millstreet Church Graveyard.

Martial Law Area – report of Michael Dineen’s Death, indicating that no enquiry or  inquest was to take place: 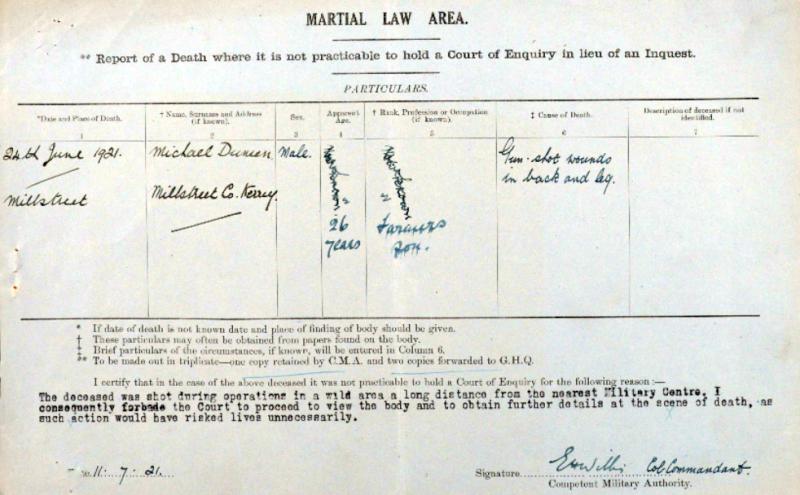 Transcript: “Gun shot wounds in back and leg. The deceased was shot during operations in a wild area a long distance from the nearest military centre. I consequently forbade the Court to proceed to view the body and to obtain further details at the scene of death, as such action would have risked lives unnecessarily. Col Commandant EH Willis (Edward Henry Willis)”

(note: neither the Press nor Dublin Castle ever reported this murder. Such crimes on the part of the British forces had been so numerous that eventually both the press and the public ceased to be surprised at them, regarding them as normal incidents in the daily life of the people. Dublin Castle, whose agents were involved in this horrific murder, were careful to conceal its occurrence – JL). 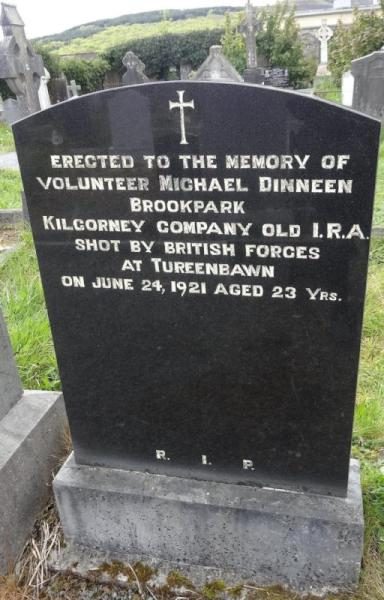 =============
The monument to Michael Dinneen is under the shadow of Mushera, not too far from the Kerryman’s Table (in the Google Map below)

Map from the Kerryman’s Table to the plaque in memory of Michael Dineen.

Michael was shot in an adjacent field, where a lone Beech Tree now stands