We thank Mary O’Sullivan, Rathduane for the very helpful background information (seen below) relating to the recent images we captured at Millstreet GAA Community Hall when we met with Taekwondo Instructor Supreme – Don Dalton – and his magnificently dedicated and gifted Class Participants some of whom have recently been awarded the highly prestigious Black Belt.  Click on the images to enlarge.  (S.R.) 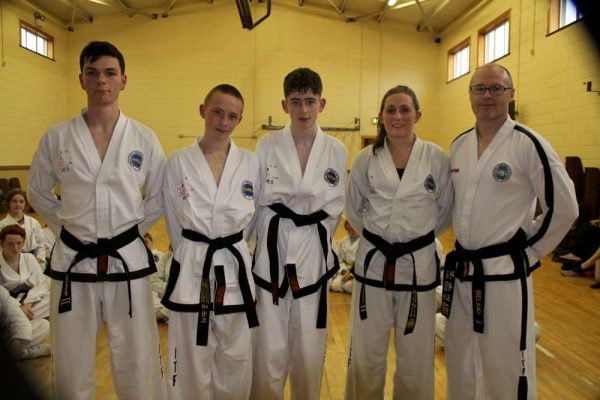 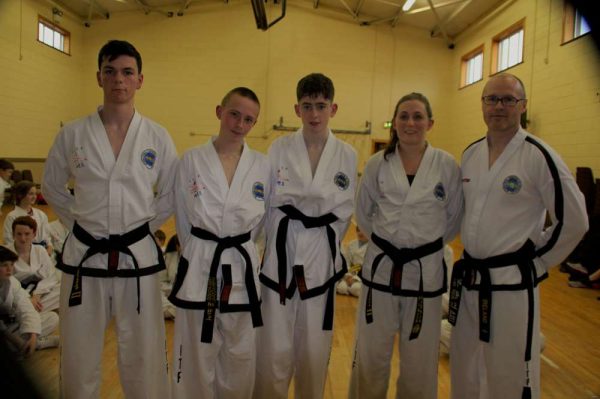 Recently four members of the Millstreet Taekwondo Club headed off to Athlone to be graded for their Black Belt exam. All were successful. On Friday 26th, in Millstreet GAA Hall, Black Belts were presented to the newly promoted 1st Degrees, 15 year old Darragh O’Brien, Rathmore & 13 year old Joshua O’Sullivan, Ballydaly. Knocknagree native Connie Vaughan & Jason Murphy, Ballydaly were both promoted to 3rd Degree 50 students in total took the exam in Athlone on Sunday 21st. The day began @ 10am with a squad session for 2 hours. Then over 5 hours, a panel of 6 judges and 6 observers graded each student on Tul, Self-defence, One step sparring, Contact Sparring, Umpiring and Theory. Jason Murphy had the highest test marks of all the candidates. A sea of white uniforms has become a very familiar sight on a Friday evening in Millstreet. Students of 8th Dan (Degree) Master Don Dalton have been coming here for 2 decades to learn the beautiful Martial art of Taekwondo. Taekwondo literally means “the way of the foot and fist” . Courtesy, integrity, perseverance, self-control and indomitable spirit are the tenets of Taekwondo and these tenets are said at the beginning & end of each class by each student.