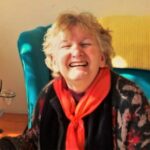 The Family of Anne O’Sullivan, Ballydaly would like to express our sincere and heartfelt gratitude to all those who helped and supported us during the past few weeks.  Her final days were made so much more comfortable due to the professionalism and loving tender care of the staff at Millstreet Hospital. They all took such phenomenal care of her for the 15 months that she was a resident there. It’s wasn’t a hospital as such, but a home from home. Whilst it’s unfair to single out anyone as they were all so brilliant to her, we just have to acknowledge Heidi as they were really partners in crime.. making Glitter Bomb cards for us that made a huge mess when delivered to us! Valerie tried to keep them on the straight and narrow, but she was fighting a losing battle.. Her co-residents became her second family. Julia who was always ready with a kind word and said the Rosary for her in her final days Finbarr who made sure the curtains were pulled down every night. Pat who always stopped at the door to say goodnight And John who had some great chats with her. Thanks to Davy, Cora and staff at Tarrant’s Funeral Home as they made her final journey so easy for her and us all. Fr. Jack and Fr. Seán did such a beautiful Mass. Fr. Jack was a regular caller to Anne and John Anthony’s over the years and Fr. Seán had married them in 1965 and buried them both. Thanks to Sharon in the Parish office who did up such a lovely booklet. Thanks to Sacristan Julie for all her help and to Joan for such beautiful music. We are very grateful to all the staff of Millstreet Hospital who formed a guard of honor on her leaving the hospital and all the friends, neighbours and extended family that lined the road from Millstreet Hospital to the funeral home and then through the Town and onto the Graveyard. Her final prayers were broadcast over John Anthony’s public address speakers which were were set up by Timmy and Martin Lucey. Thank you to all the family, friends and neighbours that took the time & trouble to drop off food to us. There were so many gestures of kindness from so many people that we as a family appreciated and will never forget.   A Mass for everyone who helped and supported us in any way will be celebrated in the near future in St. Patrick’s Church. Millstreet. Go raibh maith agaibh go léir.