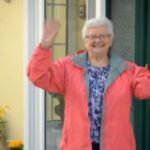 Every week has it’s highs and lows and last week brought more of the same. We must congratulate our beloved Fr.Paddy O’Byrne on the Diamond Jubilee of his  ordination and last week we learnt with horror of the death of Detective Garda Colm Horkan. To hear that a member of our Garda force has been murdered fills us with disdain and fear.   We look upon them as a body set apart, as something precious, vital, protect life. A sort of invisible shield that stands between us and the ‘big bad world’ and then to see something awful to happen to one of their members ,hits us where it hurts. Our local Gardai have placed a condolence book at the barrack ,where people can put down their names and  show solidarity with our National Garda Siochana.   Please support it well.

Fr. Paddy’s 60th brings happy memories back to me of ten years ago when I accompanied him to far away Nebraska where he Ministered for 40 years and where he celebrated his Golden Anniversary. I was glad of his company as I was flying out to the Wild West to visit some friends who were acquaintances of his also.  I left him at his base in Omaha and traveled the next two hundred miles by car, which took me to some real Indian Country. Where primitive towns and roads would fill your mind with thoughts of Gene Autry and John Wayne. Everybody seemed to know Fr. Paddy and the stories that I heard of the way he took his experience on the track and field at home, to the schools in many parts of that vast country.   His legacy lives on there to this day.    I attended Fr. Paddy’s Golden Jubilee at the Cathedral of the Risen Christ  in the City of Lincoln. It was a beautiful ceremony. I was accompanied by two Nuns from the Philippines as well as the people I was spending my holiday with.  The huge building was full to capacity with religious people of every race and colour. Fr. Paddy said the Mass and I will never forget his familiar voice as it rang out over the loudspeaker system  and couldn’t help it if my mind wandered back  to the thought of our mutual ancestors back in Millstreet and think, ‘If they could see us now.’ Our grandparents were siblings.

Our travels had their funny sides too, when at Newark Airport we were pulled over for scrutiny at the check point and taken into the next room by a stern looking official. But we were soon put at ease when he told us that the mechanism tells them to inspect people as certain times and we happened to fall into their slot at that particular time. We relaxed when he smiled and told us that we in no way looked suspicious and we were allowed to resume our flight.  Two weeks later on our return as we were checking in for our flight home, we were part of the usual queue,and this very stern looking, very tall dark skinned man was carefully checking everybody’s paper work. Fr. Paddy dressed in his priestly suit stepped forward and handed over his details. The man took a quick glance and whispered to the priest, ‘would you say a prayer for my Mother’ and I’m sure he did.     At the moment  there are messages coming in every day from Nebraska congratulating  Fr. Paddy on his Diamond Jubilee .It’s thirteen years since he came home to retire and  we wish him many more.

It was some coincidence that two boys from the West End of our town became ordained to the priesthood and served in far away Nebraska for many years.  Fr.Joe Murphy RIP and Fr.Paddy OByrne will go down in the annals of Millstreet for future generations to be proud of.

I must congratulate my daughter Nora Stanley who celebrated her 60th birthday recently, and Sean Radley on getting a new coat of paint on his lovely home at Mount Leader.

Well done to our esteemed Tidy Townsladies, Noreen Dennehy and Pat Randals, who have carried out a great deal of planting in the boxes and tubs in the town and beyond. Let the rest of us compliment their work by keeping our own places looking their best with the help of painting and planting and of course litter free. I’m led to believe that the area adjacent to our lovely bridge over the Blackwater at Dooneen has been littered  recently. Apparently there is no litter bin in the area. But in the absence of one, those who go there  are asked to take their litter home. It’s a beautiful area and please keep it that way.

I must point out a blip that I made in my Report  last week, and say that the Car Treasure Hunt in Aubane was held by the popular St. John’s Club and not the Social Club. Sorry about that. The proceeds will go to our Meals on Wheels Fund. Well done to all involved. By the way I am always glad when someone points out a mistake to me. I thrive on constructive criticism because it is always helpful.

Still with Aubane, sad to say  that the annual Mass which is said at St. John’s well every year on June 24th will not take place this year, for obvious reasons. It was always a spectacular occasion, with the alter set up beside the Well and several visiting priests taking part. The Pipe Band and the Church choir proving the music and singing  and the breathtaking scenery  stretched out to the faraway horizon. Not forgetting the midges. Please God it will happen again.

As time goes by the expected easing of regulations is fast becoming a reality. The list is far too far ranging for me to go into details. But with the opening of more shops and the permission the travel further afield  is showing up it’s own  problems . In a word, the need for toilet facilities. Think about it, every hotel and cafe is shut and places like filling stations where the service was available are not allowing their facility to be used. Queuing is rampant  in superstores, clothes shops and a host of others. It goes on for hours and the one thing that is common to all is that there are no toilet facilities. Even when going out for a drive in an effort to get out of the house for a while, going for a few rounds of the town park  and so on.  There is no place to GO. Every body needs it and it’s not there. Homeless people in big cities are very severely affected by the problem and could pose a hygiene problem.  Years ago we all had to pay for our moment’s relief and in a perfect world I suppose you’d expect that the charge would go towards to the cost of keeping the place clean. I have met some people who would  pay anything  for  the use a toilet since the rules of Covid19 have been changed.  It was the last thing they thought of before going for a run to the shops for what they thought was a few moments only to find when they  got there and had to wait at the back of a long queue that they realised the terrible position they were in. This problem that will have to be seen to sooner rather than later. Mind you the shopping Centre at Mahon Point were telling people on Monday that their toilets were open. Just the same, be warned.

Our Parish Church looks very different now when you go in, with the seating all changed in preparation for the next phase. A great deal of work must have gone  into arranging all the seating to fit in with the rules of social distancing  and a great deal of organising will have to go in to controlling  the numbers of people who can attend for Masses. Nowadays we have to be prepared to learn something new every day.  It is all done with our best interests at heart, but the people who make the rules or the demands that call for them can’t get everything right. So very often we have to think outside the box and as the popular song says, “Soldier on”.

Pat Breen sent out a notice to say that all the members of the  Eucharistic Adoration Group will be included in the morning Mass on Thursday June 25th.

Please remember to support the GoFundMe appeal on Cork Music Station which is in aid of Bumbleance, the free ambulance service which takes sick children to hospitals and other places of their needs. To contribute to their running cost text Fuel to 50300. Other details can be found on the Station.

Don’t forget to tune in to Cork Music Station  tonight from 9.30 to 11 to hear Sean Radley’s interview with Fr. Paddy O’Byrne.

Lockdown sounds like a dirty word and at the onset we found it very hard to take in all that the word “Lockdown” stood for. We did what we were told and watched the television to see what others were doing to cope and then it was lifted and now that the world around us has time to consider and reflect.   It is amazing how many good stories are coming through. So many people deciding to continue to work from home and have found themselves with time on their hands to do the many things they love doing, away from the maddening traffic jams and parking problems etc. Time to have a family dinner in the evening instead of rushing home feeding the children and putting them to bed before having their own meal. Now they can all dine together  and it is reaping benefits for one family whose three year old has learnt how to use the knife n fork from seeing Mom and Dad doing  it. It’s only a very small thing, but proof of what little ones can learn from spending  more time with their parents.There is an endless flow of happy accounts coming on stream telling of the new norm, which is not all bad. Buíochas le Dia.

The seeds of an ancient sport are being planted by one young lad in Kilmeedy. Eleven year old, Peter O Sullivan, son of Michael and Margaret  has taken up Road Bowling  and overpowered his opponent in an exciting bout which was held in Kilnamatyra at the weekend. Well done Peter.

Some young lads from our Presentation Convent School met up at the school on Monday for a little ceremony as they prepare to progress to the Boys National School  when school resumes again. In normal times they would have received their First Holy Communion but due to Covid19  that did not happen. Photographs were taken to mark this big step in their young lives but they had to say goodbye to their beloved teachers who for the past few years whom had given them their first start in education without a fond hug or even a warm handshake. We congratulate them on their passing out and wish them every success and God’s Blessing in the future.