An eight-year-old boy from Dublin who was due to make his First Holy Communion tomorrow is instead cycling a marathon close to his home for a charity close to his heart.   This wonderfully uplifting and very inspiring story recently featured on the RTÉ Television News. He has already raised nearly €11,000 through his GoFundMe Page !!   Update: The Fund has now reached an absolutely amazing €67,172.00 which includes a very generous contribution by Conor McGregor of €50,000.00! (S.R.) 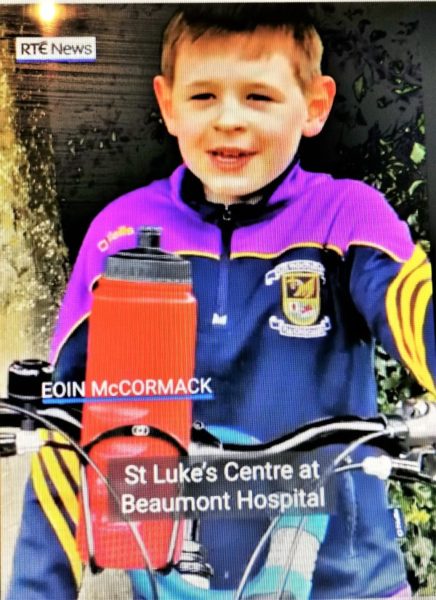 Well done Eoin on behalf of all the coaches and boys from Kilmacud in Dublin….was just one of the many messages shared with Eoin.

This is Eoin McCormack of Dublin who is Essie Roche’s Grandson. Eibhlín, Bríd & Ciarán Roche wish their cousin the very best of luck.  Sincere congratulations to Eoin on his truly inspirational project.   Eoin’s Mum is Margaret (née Roche) of Drishanebeg.  Tap on the image to enlarge.  (S.R.)

2 thoughts on “Eoin McCormack with Millstreet Connections Inspires All”