This song My Own Dear Millstreet Home is quite beautiful. Recorded by Eileen Sheehan of Abbeydorney in the 1960’s, they don’t make them like this any more. But, does anyone know who wrote this song?

My Own Dear Millstreet Home

But ’till my days on earth are o’er
and I shall cease to roam
I’ll ever love thee more and more
my own dear Millstreet home. 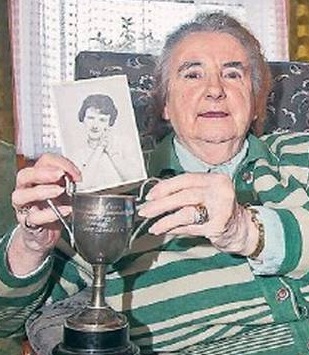 Eileen Sheehan: Born on February 23, 1933, Eileen went to school in the local national school and then to Moyderwell Secondary in Tralee. However, because her mother died at a young age Eileen stayed at home in Abbeydorney with her father, who was the local tailor.
Eileen loved to attend the local dances and carnivals with her friends and, as she grew up, the Abbeydorney Drama Group became a very big part of her life, regularly travelling far and wide to perform with her fellow amateur actors.
As well as acting, Eileen had a huge passion for singing and in the mid
1960’s she recorded some of her favourite songs on LP. The album was
re-released on CD in 2011, which gave Eileen a new lease of life. Another proud moment for Eileen came in 1962 when she he was runner-up in the national Queen of the Ballad competition… read the full article

Known as Kerry’s Queen of Ballads, Eileen was a well known face on the music scene of the 60’s, and not only performed in Kerry but throughout the country. She passed away in 2015, at the age of 82. [2]

Eileen was interviewed on Radio Kerry in 2012. Listen to it here:

Listen to another 18 songs sung by Eileen Sheehan HERE.