Upcoming Events to be held in Aubane during August

Sunday August 11th : Aubane Social Club Family Fun Day at Aubane Community Centre at 2pm,Lots of Fun for all the Family, All Welcome 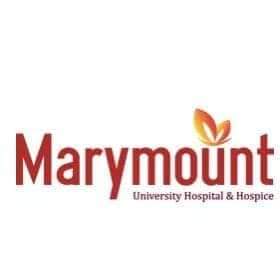 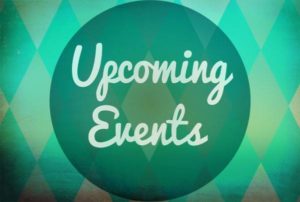 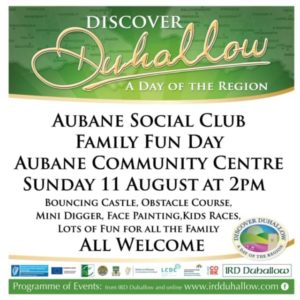 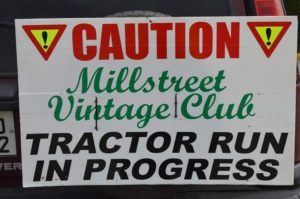 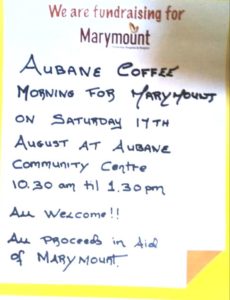 TODO: Straighten this out

Aubrey Wallis was the last of the Wallis Family to own Drishane Castle and estate. …….

His father died in 1868, and Henry is the heir to the estate.

1868 Referred to as Aubrey Willoughby Wallis in a newspaper – this may have been a mistake on the part of the reporter though [TODO: clarify]

He was commonly known as Aubrey Wallis [ref], though the people of Millstreet knew him as “the Minor”.

Married firstly: 1 March, 1883, in Kidderpore, Bengal, India,  to Elizabeth Caroline, eldest dau. of Hon. Albert Yelverton Bingham, 5th son of the 3rd Lord Clanmorris (see BURKES Peerage), and by her has issue. From him she obtained a divorce by Act of Parliament 1906. [Read our article on that divorce]

1886 – January – He had been living at ‘The Grange’ in Auckland, NZ, but sold all his possessions and moved back to England [ref]

1896 August 14th – Mr Henry Aubrey Wallis, of Drishane Castle, Millstreet, has returned to his paternal home after many years of travel. This will be welcome news to all who knew him. Mr Wallis was the largest employer of labour in the Millstreet district. [Cork Constitution]

He is credited with opening the new houses at Minor Row [ref], which were named after him.

1901 – Aubrey appears in the 1901 Census of England, as head of the house at 128 Piccadilly, a Gentelman’s club at the time called the Piccadilly Club.

1911 – Appears in the Census of England, as head of the house with his wife Julia Mary Catherine, a visitor, and seven servants (a butler, a footman, a pantry boy, a housekeeper, two housemaids, and a kitchen maid). Address: Roskrow, Penryn, Cornwall. His occupation is stated as “Justice of the Peace for County Cork”

1916: On the death of his mother-in-law Julia Catherine Wright (88), he changed his surname from Wallis to Wallis-Wright, to protect the Wright surname.

1920: Gave up the Mastership of the Woodland Pytchley Hounds, and sold his pack of Kerry Beagles which had been in the family for generations.

In 3rd January 1923, he changed his name from Wallis-Wright to just Wallis [ref], after he had originally changed it in 1916 [ref]

Passed away on 20 Apr 1926 in the Piccadilly Hotel, London

note: Have yet to figure out where he got the “Major” part of his name

Married first, 1 March 1883, Elizabeth Caroline, eldest dau. of Hon. Albert Yelverton Bingham, 5th son of the 3rd Lord Clanmorris. From him she obtained a divorce by Act of Parliament 1906. [TODO add link to profile]. They had issue:

There are very few men in the Kingdom today who could boast of a more brilliant or a more successful career in sport than Major Aubrey Wallis-Wright, Farming Woods Hall, Brigstock, Northsmpyonshire, and Master of the Woodland Pytchley Hounds. Born on July 4th, 1861, at Drishane Castle, Co.Cork, Major Wallis-Wright was the son of Mr.John Richard Smyth Wallis, High Sheriff of Co.Cork in 1857. In 1883 Major Wallis-Wright married Elizabeth Caroline, eldest daughter of the Hon. Yelverton Bingham, fifth son of Lord Clanmorris, by whom he had one son and a daughter. The former Lieutenant Henry Digby Wallis, Coldstream Guards, was killed at Ypres during October, 1914, The death of this gallant son proved a heavy blow to the Master of the Woodland and Pytchley. An extraordinary affection and spirit of camaraderie existed between father and son, and it was the dream of the former’s life that his heir and the “last of the line” should take over the family pack of Kerry Beagles on his retirement from office.
In 1907 Major Wallis-Wright married Julia Mary Catherine, window of the late Captain EW Curteis, who on the death of her mother Mrs Julia Catherine Wright, succeeded to the Mottram estates, Cheshire. In September 1916, the surname of … (there’s 2 more page on Aubrey in the article, but are not currently availbale)

TODO: find out more about her

She and Henry Aubrey Beaumont Wallis were divorced in 1906 by Act of Parliament.

Aubrey’s Mother: Octavia Willoughby was born illegitimately. She was the daughter of Digby Willoughby, 7th Baron Middleton. She married, firstly, Major John Richard Smyth Wallis on 01 Sep 1853. She married, secondly, Sir George Howland Beaumont, 9th Bt. , son of Sir George Howland Willoughby Beaumont, 8th Bt. and Mary Anne Howley , on 4 April 1872 in St. Paul’s Church, Knightsbridge, London, England She died Dame Octavia Willoughby Beaumont on 19 June 1901 at 66 Cromwell Road, London, England. She was buried in Cole Orton, Leicestershire, England. Her will was probated, at ¹12,196.  Her will was probated at £12,196, which, using the most modestcomparator, would be over a million pounds today, or rather more than four million comparing average wages. A lady of means indeed! [ref1] [ref2]

This is where the name “Beaumont” comes from.

The Kerry Black and Tans.
It is interesting to learn that the fine pack of Kerry Beagles,
which are showing sport in the Woodland Pytchley country, will
shortly come into the market, Major Aubrey Wallis-Wright having
decided to give up the Mastership . These black-and-tan hounds
have been in the Master’s family for many generations, and are
famous for their hunting qualities. Originally they were hunted
in Ireland, then went into the Ribblesdale pack and hunted the
wild buck in Lancashire and Yorkshire . Major Wallis-Wright got
the strain back, and formed a pack which hunted the Four Burrow
country in Cornwall . When he accepted the Mastership of the
Woodland Pytchley in 1913 he took the Kerry Hounds with him.
They are remarkably powerful hounds, the dogs averaging 25 ins.
and the bitches 231 ins. They have exceptional bone, and not a
single hound stands over at the knees. Major Wallis-Wright has
bred them with the utmost care, using only sires and dams that
have well proved their working ability. An offshoot of the
Pytchley country, the Woodland has always been noted for the
superior quality of its hounds. When Lord Lonsdale hunted the
country he brought one of the finest packs in the kingdom from
the Blanknev kennels. His successor, Mr. Austin Mackenzie,
brought his own hounds from the Old Berkeley country, and when
he gave up the Mastership fourteen years later he sold the pack for
5,000 guineas, Mr. W. M. Wroughton buying the bitches for
£3,000 and lending them to Lord Southampton, who hunted the
country for a couple of seasons. Mr. E. A. V. Stanley also had a
very fine pack at the Brigstock kennels. In regard to working
quality the present pack compares favourably with any of its predecessors, and the black-and-tans are likely to be keenly sought
after. [Polo Monthly 1920]

Polo Players as M .F .H’s.
Polo players are likely to he strongly represented on the list
of M.F.H.’s next season. Captain George Renyille, for example,
has arranged to take Major Aubrey Wallis-Wright’s place in the
command of the Woodland Pytchley Hounds. He should make
an excellent M .F.H . He has been getting his hand in this winter
by helping his old friend, Mr. Isaac Bell, with the Kilkenny
Hounds. The keenest of sportsmen, Captain Bellville is generally
popular. Polo readers will remember the dashing games he used
to put up for the Old Cantabs, helping that grand team to win
seyeral Champion Cups. Unfortunately, the bad wound he
receiyed early in the war prevented him from playing polo last
summer, when he had to content himself with serying as official
umpire of the chief Ranelagh matches. [Polo Monthly 1920]

THOMAS WALLYS, of Curryglass, left at his decease two sons,

The eldest son, THOMAS WALLIS, of Curryglass, mentioned in will of his uncle Peter, 1630, party to a deed in 1640, had issue,

The eldest surviving son, THOMAS WALLIS, of Curryglass.
Married first, 1679, Jane Ludyman, and by her had issue:

Mr. Wallis had in the time of JAMES II to fly to England with his wife and two children.
He married secondly, Persis (1685-), daughter of Holmes, and had issue:

Mr. Wallis purchased considerable landed property in the Co. of Cork, in 1703, from the trustees of Forfeited Estates.

HENRY WALLIS, (1723 – ) of Curryglass and Drishane, under the limitations in the will of his maternal grandfather, Henry Wallis, became entitled to the Drishane and other estates;

He married 1758, Elizabeth, daughter of Christmas Paul, of Paulville, Co. Carlow, by Ellen his wife, daughter of Robert Carew, of Ballynamona, Co. Waterford, and had four sons and two daughters:

Married first, Patience, eldest dau. of John Longfield, of Longueville, Co. Cork, and by her had one dau.,

He married secondly, Sept. 1787, Marianne, daughter of John Carleton, of Woodside, Co. Cork, and by her had issue,

Married secondly, 26 Dec 1827, Ellen, daughter of Grice Smyth, of Ballynatray, Co. Waterford, and sister of the Princess of Capua, and of Lady Dinorben  and had:

Married first, 1 March 1883, Elizabeth Caroline, eldest dau. of Hon. Albert Yelverton Bingham, 5th son of the 3rd Lord Clanmorris. From him she obtained a divorce by Act of Parliament 1906. [TODO add link to profile]. They had issue:

Listen to Aisling Stuart and her mother Imogen on the radio with Miriam O’Callaghan on Rosnaree House and the Law family:
http://www.rte.ie/radio1/miriam-meets/programmes/2012/0520/351008-200512/

Captain Robert Law (1890-1973). Like his two younger brothers, Robert was educated at Haileybury, a boarding school 20 miles from London, returning to Beamont during the holidays. During the First World War, he served with the Royal Dublin Fusiliers and won a Military Cross. A fearless eccentric, he later went to West Africa where he shot twelve bull elephants but got charged by the thirteenth which left him badly mauled. He later emerged from the jungle with a hoard of ivory, claiming he had survived by eating an exclusive diet of bananas, which fruit he never ate again. He subsequently eloped with Audrey Beatrix Wallis of Drishae Castle, Millstreet, Co. Cork, sold Beamont and settled on the Boyne at Rossnaree, Co. Meath, where members of the Law family still live today.

The ever popular TR Dallas is appearing at McCarthy`s Bar in Millstreet on Tonight Thursday August 1st,a great Night of Music and Entertainment not to be missed,and on Sunday Evening August 4th from 6-9pm Barbeque for Customers with Music by The Rogues. 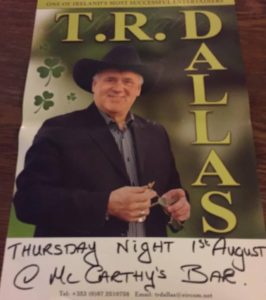 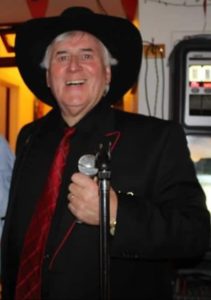 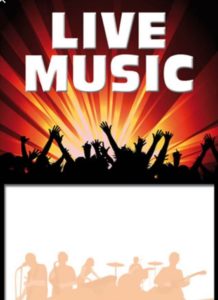 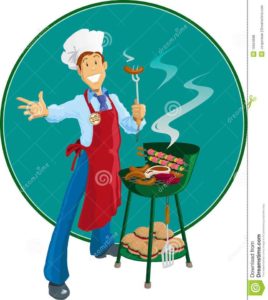 Great credit is due to the local Coordinators for organising the Annual Camogie Camp in Millstreet Town Park which is presently taking place.  Special Guest Coaches Tim O’Mahony of Newtownshandrum (Senior Cork Hurler), Kate O’Keeffe (Cork Camogie Player) and Darragh Cashman (Under 20 Cork Hurler) have been providing great inspiration to the many young participants.   Here we share images from the uplifting sporting event.  Click on the images to enlarge.  (S.R.) 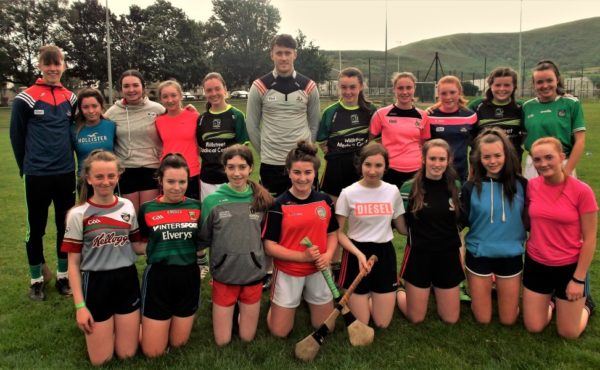