In August 2018, after walking the gruelling 700 mile Ireland Way, Dermot Breen finally arrived at his late wife’s graveside in Ballycastle, honouring a solemn promise to complete the walk in her memory and also to raise funds for Cancer Research UK.

The journey took Omagh born and Belfast based writer, Dermot, over nine weeks to complete – six weeks walking and over three weeks recovering from injury, and included a night in Millstreet along the way. He has now told his fascinating story in his latest book, ‘Exiles: A journey through Ireland from Beara to Ballycastle’…. 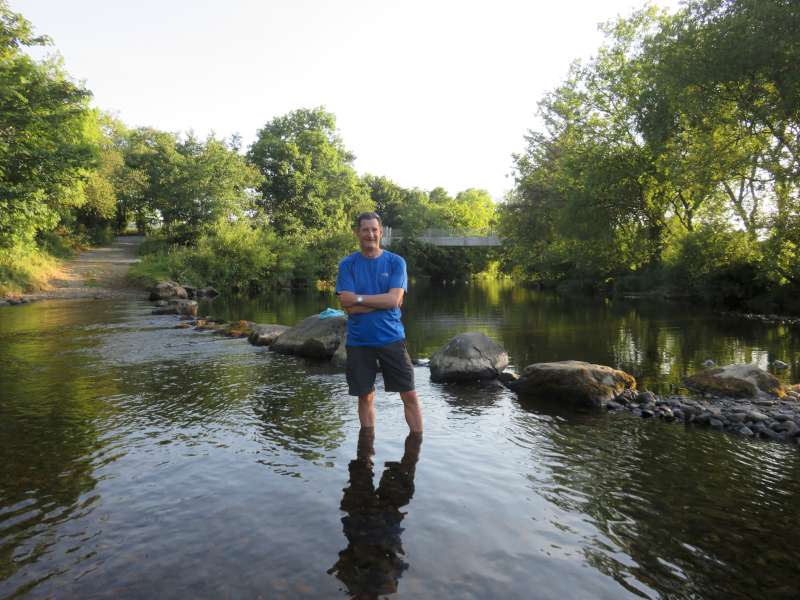 “… standing in the River Blackwater at the Bowing crossing, cooling my feet after a long day’s walk. I stayed with the wonderful Eileen O’Riordan while in Millstreet”

In 2015, Dermot walked the entire Ulster Way around Northern Ireland and in 2016 he walked the Camino de Santiago in Northern Spain. In 2017, he took a break from long distance walking to concentrate on writing and has previously had two books published charting his physical and emotional journeys since he lost his beloved wife of 28 years to ovarian cancer in January 2015. 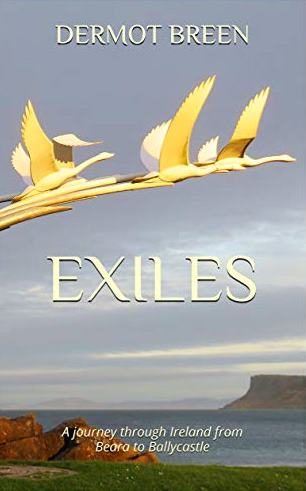 In his latest book, the third and final chapter in his Pilgrim Trilogy, Dermot tells the story of his epic journey through the hidden heartlands of Ireland, following a route taken by a seventeenth century Irish Chieftain for much of the way. This was Donal Cam O’Sullivan Beare who led 1,000 of his followers out of Munster in 1603 to escape forces loyal to Elizabeth 1 in the wake of the disastrous Battle of Kinsale.

Commenting on the route, Dermot said, “O’Sullivan Beare and his followers had to endure harsh winter conditions, getting lost in snow covered mountains, almost constant attack by Royalist forces and severe injury and death. I in turn had to endure a blistering heat wave, getting lost in fog covered hills and being attacked by herds of bullocks and suffering a demoralising injury that almost brought my walk to a premature end. I was only two weeks into my journey, when I suffered a torn calf muscle while attempting to escape from a herd of cattle. I then had to take a few weeks out to receive physio and allow my leg to recover before starting back.”

“O’Sullivan Beare’s people also experienced extreme hunger on their march, but fortunately I only experienced extreme hospitality! Ireland is of course renowned for its hospitality, but once people realised that I was walking for a good cause, the hospitality went into overdrive! I never imagined that my walk would become the most remarkable of journeys, filled with stunningly beautiful landscapes and incredibly hospitable people or that it would finish with the most amazing of homecomings on the eve of Ballycastle’s historic Ould Lammas Fair.”

Exiles is steeped in history and humour and skilfully weaves together fact and fantasy, providing the reader with an incredible account of a journey through many of the lesser known parts of the beautiful island of Ireland. Along the way, the author encounters many weird and wonderful characters, including a ghostly guide who is very familiar with the life and times of O’Sullivan Beare. Exiles is also an inspiring account of the author’s continuing emotional journey, as he seeks to come to terms with the loss of a woman he loved so much – a journey that finally draws to a fabulous and heart-warming conclusion.

Talking about the title of his new book, Exiles, Dermot said, “O’Sullivan Beare eventually had to leave Ireland and live out the rest of his life in exile in Spain. The start and end points of my walk, Beara and Ballycastle, are both closely associated with the Children of Lir legend and they were, of course, exiled as swans for 900 years by their jealous step-mother. The Children of Lir sculpture in Ballycastle actually appears on the cover of my book. The more I thought about the concept of exile, I began to realise that it could equally be applied to anyone who has lost a soul mate. After the overwhelming feelings of grief and anger have receded, you are left with a feeling of being exiled; obviously not from one’s home or one’s country, but from the life that you once had. And the person you lost but still love, just like the country a person has been exiled from, is unreachable for the rest of your days. But you have to accept this fact and learn to live with it.”

‘Exiles: A journey through Ireland from Beara to Ballycastle’ will be officially launched in The Parish Centre in Ballycastle on 20 June and will be available to purchase from Amazon after that date, either in print or Kindle format. All author profits go to support the work of Cancer Research UK.

1. For further information or interviews, please contact Dermot Breen by email at <email> or mobile on 0778 7735952

3. He graduated in Civil Engineering at Queen’s University Belfast in 1983 and then followed a career in occupational health and safety for over thirty years. He took early retirement from a senior management post in 2016 following the death of his beloved wife Jacqui from ovarian cancer.

4. He has since devoted his time to raising funds for cancer research and has undertaken several long-distance walks in Ireland, Spain and China as part of his fundraising efforts. To date he has raised over £42,000 for Cancer Research UK.

5. He has previously written ‘The Edge: Walking the Ulster Way with my Angels and Demons’ and ‘The Man with the Camino Tattoo’, which are available from Shanway Press at http://shanway.com or via Amazon, with all revenue from sales being donated to the charity, Cancer Research UK.

6. People can either support him by donating to his fundraising page at:

https://www.justgiving.com/fundraising/1000k4j or by purchasing one of his books, as he also donates all sales revenue to the charity.

5 thoughts on “Exiles: A journey through Ireland from Beara to Ballycastle”