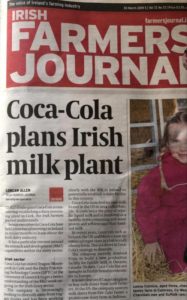 One of the major agribusiness news items during the week was that Coca-Cola are planning to set up a milk plant in Ireland. Not exceptional news as it is well known that Coca-cola is moving to diversify away from sugary drinks.

However, speaking to John yesterday, he was telling us that Coca-Cola have actually been exploring the possibility of setting up their milk plant on the site of the old creamery in Kilcorney. He added that they  have been contacting local dairy farmers, if they would be interested supplying their milk directly to the new Coke plant.

Apparently, the response has been overwhelmingly positive, and it is hoped that if the plant goes ahead, the new plant can create a lot of employment for the area, just like the Nutricia infant formula plant has done for Kilmurray.

Coca-Cola is increasingly looking to diversify away from sugary drinks, and has been working closely with the IDA to potentially establish a dairy facility here.

In recent years, countries such as Ireland, the UK and Mexico have introduced sugar taxes in a bid to curb obesity levels. Coca-Cola first launched its Fairlife milk brand in 2015, which costs twice as much as regular liquid milk and contains 50% more protein and 30% less sugar.

It invested €75m in 2018 to build a new Fairlife processing facility in Ontario, Canada. But it has yet to bring its milk brand to European consumers.

Further information on this positive development will be posted on millstreet.ie as soon as we hear about it.

5 thoughts on “Milk Processing Plant being considered for Kilcorney Creamery”