“TORONTO, Feb. 7, 2019 /PRNewswire/ – Adventus Zinc Corporation (TSXV: ADZN, OTCQX: ADVZF) (“Adventus”) is pleased to announce that is has entered into a heads of agreement to sell its Lismore, Fermoy, Millstreet and Charleville exploration projects in Ireland to the privately-owned Australian exploration company BMEx Limited  … read the full press release on PRNewswire“

The above press release was published yesterday, and frankly I had to read it twice to make sure I had read it right. Essentially the Adventus Zinc Mining Exploration Company purchased the rights to mine the area around Millstreet, and sold it to an Austrialian mining company. Just like that.

So what’s going on, and where is the mine? Well there isn’t any mine, nor have any exploratory drill holes been sunk as of yet. The companies are trading on the hope of finding Zinc in the Millstreet area. (Ireland has the highest concentration of zinc in the world.

Why Millstreet? Millstreet lies right on top of the Killarney-Mallow Fault Line, a major fault line where two tectonic plates were pushing against each other 270 million years ago, which ended up forming the mountains south of here. In creating the mountains, the surface of the earth buckled and layers containing Zinc from deep underground were pushed up to the surface where they are remain to this day, available for mining.

It is no coincidence therefore that the map of the Millstreet Block (below) follows the fault line from Killarney to Banteer. Nothing might ever happen with mining … but you’d never know. 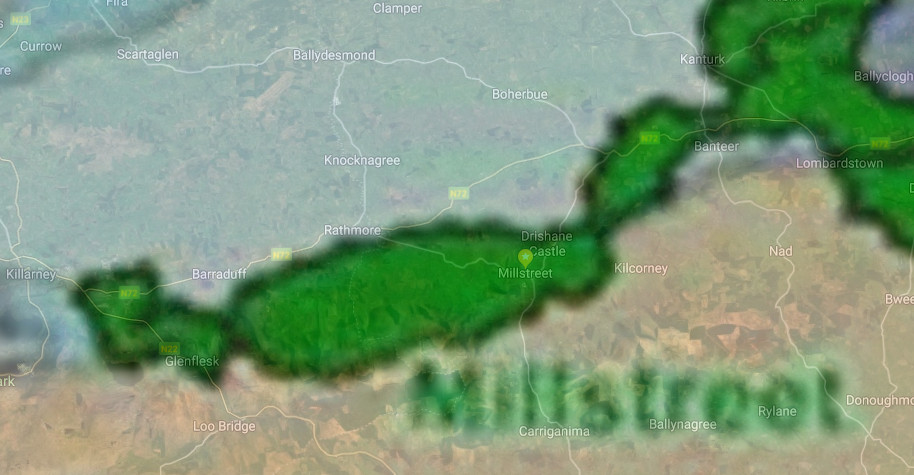 Read more on the Killarney-Mallow fault line in an article we wrote in 2015: On Shaky Ground

Application and Granting of Exploration Licences occurred in April-May 2018:

“Re-organization of Adventus’ Irish Mineral BlocksAdventus’ new structural and tectonic interpretations for the Rathkeale and Lismore Blocks has not only led to the identification of drill-ready targets, but it has led to a realignment of priorities for its land tenure.  This means that Adventus is shifting its focus to the southern and south-western end of the Irish Orefield.  Adventus is in process of relinquishing its Shrule, Moyvore and Gaine River Blocks and it has lodged applications for two new Blocks of ground at Charleville (10 licences, approximately 300 km2) and Millstreet (11 licences, approximately 330 km2 hectares).  On April 30 and May 16, 2018, the EMD of DCCAE issued letters of offer in relation to all licences for these two new Blocks.  Adventus has accepted the offers on May 16, 2018 and anticipate that the licences will be issued in the latter part of the second quarter or early in the third quarter of 2018.” – [Newswire]

Adventus had already started checking for minerals, and noted that zinc-lead mineralization was under-explored or entirely unexamined in this area, but it may also reveal copper:

“Recent Adventus basement terrane studies by Aurum, have resulted in a shift of explorational focus to the south-west of the Irish Orefield with the addition of the Fermoy, Charleville and Millstreet blocks to augment Adventus Zinc Corp. ground positions and initial targeting studies are underway on all three blocks for Zn-Pb-Ag & Cu-Co-Ag mineralization. Situated immediately to the west of the Lismore these blocks form an essentially contiguous east-west block of important strategic interest on the Killarney-Mallow Fault Zone, and associated splays. These new areas have historically been considered mainly for copper potential with similar geology and structure to the adjacent Tullacondra (3 Mt @ 0.7% Cu, 29 g/t Ag) and proximal Aherlow (5.5Mt @0.89% Cu, 40g/t Ag) Cu-Ag deposits, with the potential for Irish-type zinc-lead mineralization being under-explored or entirely unexamined.” – [Aurum] 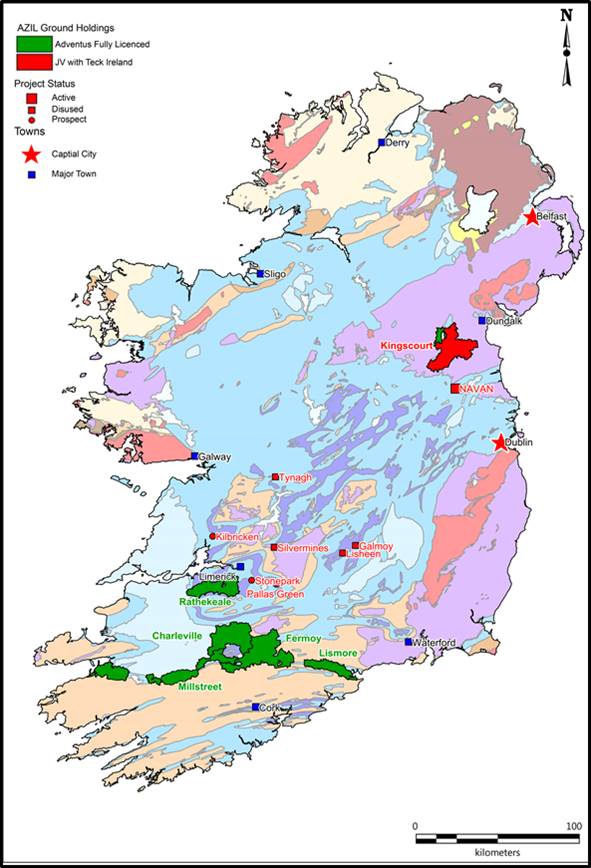 Above: Map of Adventus Mining interests in Ireland

Above: Adventus’ Map of the Millstreet Block overlaid over Google Maps

Department of Communications, Climate Action and Environment:  Mineral Exploration & Mining
The Policy in Ireland is to promote mineral exploration to enable the discovery and development of economic deposits. The goal is to maximise the contribution of the mining sector to the economy, with due regard to its social and environmental impact. Activities are carried out by the private sector under permits issued by the Minister. There are separate processes for Prospecting Licences and State Mining Facilities. These are enshrined in legislation, which is currently under review. We do not license or regulate petroleum, or quarries for stone, sand, gravel, clay, or aggregates, with some exceptions. [Dept of the Environment] 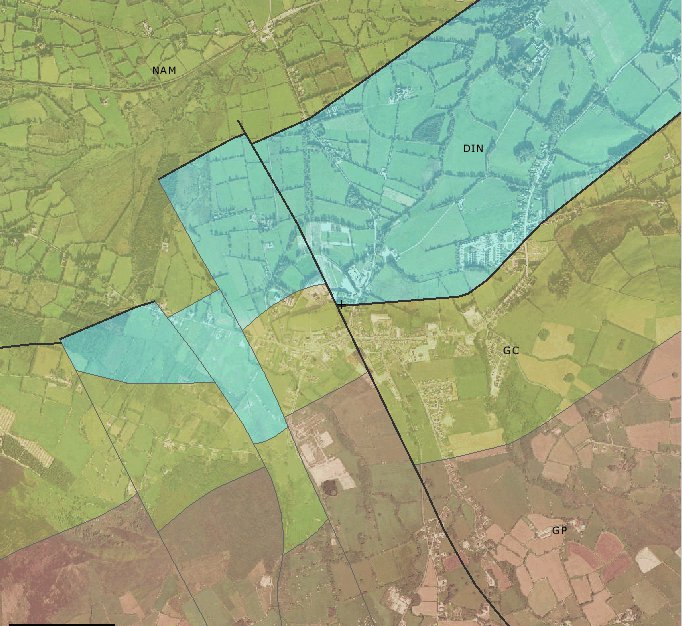 Map of the tectonic fault lines around Millstreet 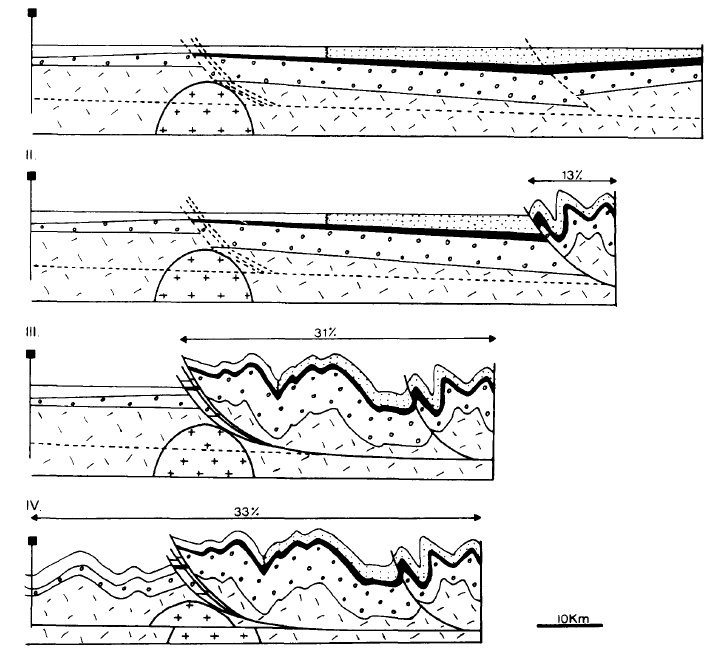 A graphic illustration of how the mountains from Millstreet to Killarney were created.

How long is a Prospecting Licence valid for?
The Licence will normally be valid for a period of six years.

What does a Prospecting Licence entitle you to do?
The licence entitles the licensee to carry out various activities in the search for certain (specified) minerals.

What must a Licensee do to maintain a licence?
The licensee is required to spend a minimum amount of money on prospecting, to report formally on its activities on a regular basis and to carry out its work in an environmentally responsible manner.

How is Prospecting for Minerals in Ireland Regulated?
The Minerals Development Acts 1940 to 1999, under the aegis of the Minister for Communications, Energy and Natural Resources, govern exploration for, and development of, all minerals other than stone, gravel, sand and clay. The agency responsible for the administration of the regulatory regime is the Exploration and Mining Division (EMD) of the Department of Communications, Energy and Natural Resources.

Does a Licensee have the Right to Enter onto Someone’s Land?
Yes. Under the 1940 Act, a licensee is entitled “…to enter on such land ….. and there do all such things as the licensee considers necessary or desirable for the purpose of ascertaining the character, extent, or value of the minerals lying on or under such land, …. and take and remove reasonable quantities of any such minerals for the purpose of analysis, test, trial or experiment”. However, a Licensee is required to carry out this work “……in such manner as not to interfere unnecessarily with the amenities of the locality …..”. Also, when a Prospecting Licence is being issued, the licensee is instructed that before exercising the rights of entry conferred by the Licence, they should, as far as may be practicable, discuss with the landowner or the surface occupier their intention to enter on the property and to carry out certain prospecting work there. Also, licensees are liable under the Minerals Development Acts to pay compensation should they cause any damage to land, minerals, or water supplies, or cause a nuisance by their prospecting.

Does Prospecting Pose any Risk to the Environment?
No, there is little risk, Mineral prospecting is generally non-intrusive in nature.

What activities does prospecting entail?
It usually involves looking closely at the rocks that are found in the area (geological studies), sometimes collecting small samples of rocks, soil, or sediment from streams, for analysis (geochemical surveys), or measuring certain properties of the rocks in the area e.g. their magnetic properties (geophysical surveying)

Are there more Intrusive Activities?
If there are promising results, a licensee may wish to carry out diamond drilling or to dig a temporary trench to investigate the rock at depth.

What is the procedure for drilling?
A licensee must notify EMD two weeks in advance of their intention to drill and must have obtained permission from the relevant landowner before entering the property.

What is the procedure for trenching?
No trenching can be carried out without the prior written permission of EMD.

What Safeguards are in Place?
Licensees are obliged to comply with the guidelines for Good Environmental Practice in Mineral Exploration (available from our publications section of this website) which set out in considerable detail the precautions required to avoid damage or pollution. All licensees are notified of the existence of Special Areas of Conservation (SACs) and Special Protection Areas (SPAs) in their Prospecting Licence(s) and of any restrictions that apply to working in these Areas. A licensee can not carry out any restricted activities in these Areas without the prior approval of EMD. Similarly, no work can be carried out on or adjacent to a National Monument without prior approval.

Does Exploration Reuire Planning Permission?
No. All works carried out under a Prospecting Licence are classified as exempt development under the Planning and Development Act 2000.

Is a Licensee Entitled to Mine Minerals?
No. The holder of a Prospecting Licence is entitled only to prospect for minerals; and it a criminal offence to extract commercial quantities of minerals without a Mining Lease or Licence. Before a licensee is permitted to carry out mining, they must first obtain Planning Permission from the Local Authority (or, on appeal, from An Bord Pleanala) and alson acquire an Integrated Pollution Control Licence from the Environmental Protection Agency (unless it is a small industrial minerals development). An Environmental Impact Statement must accompany these applications. This will ensure that all planning and environmental issues are fully considered. Also, mining can not commence without a Mining Lease or a Mining Licence from the Minister for Communications, Energy and Natural Resources. There are  opportunities in these processes for members of the public to have their views taken into account.

2 thoughts on “Zinc Mining in Millstreet?”