Millstreet Vintage Club held a very successful AGM at The Parish Centre in Millstreet on last Thursday Night Jan 10th.
There were close on 40 people in Attendance comprising of both current Club Members and also a significant number of New people who also became Members of the Vintage Club on the Night at the Meeting as well.
Dan O`Riordan Club Secretary outlined and recapped on a very successful and busy year for the Club in 2018 with many great events being held including a highly successful Charity Truck Run,Car Runs, Tractor Runs, Barbeque, Cars/Chat/Coffee Morning,Model Show etc taking place and as a result the Club raised over €6,500 along the way during the year as well for some very worthy Charities which included a presentation to both Millstreet Hospital and Millstreet Community Housing of €500 each before the AGM took place on Thursday Night last.

Myra Sheehan Club Treasurer gave a detailed Financial Report for The Year while Club Chairman Donie Lucey in his address thanked all Club Members,Fellow Committee Members and anyone else who helped and supported the Club during the Course of the past Year gone by.

Following this a New Committe for the Club was Elected as Follows:

Millstreet Vintage Club presented Awards on the Night for the Best Vintage Car to be brought out for the First Time during 2018 by a Club Member,the overall Winner of this was Mary Keane with both Willie Fitzgerald and Peter Dineen taking the Runner Up Awards in this Category.

Millstreet Vintage Club are again planning on having a Busy year in 2019 with many of the Events held during 2018 being planned again for the coming Year with the first Event of 2019 taking place on Sunday Jan 20 which will be a Cars/Coffee/Chat Morning in aid of Cork Simon Community  which will be held at the Wallis Arms Hotel starting at 11am, further details of this Event and all the other Events to take place during the coming Year will follow shortly.
The Club is always open to New Members and if you want to find out more about joining the Club give Donie Lucey a Call on 086 8545873 or Dan O`Riordan on 087 2452569 or you can contact any Club Member and please do check out our  Twitter Page https://twitter.com/MillstreetV for updates, and you can check us out on Facebook as well at https://www.facebook.com/Millstreet-Vintage-Club-1235187116516958/  or Email <email> 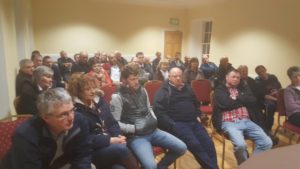 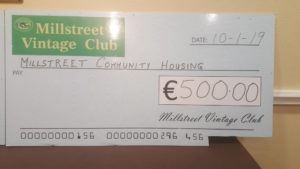 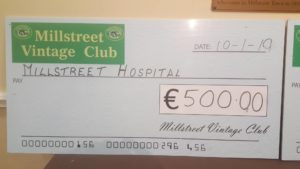 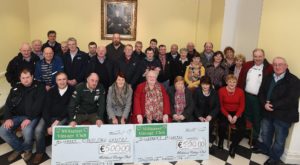 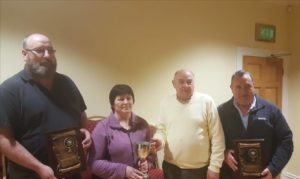