It’s sometimes known as the Secret Waterfall, because few outside Millstreet know of its existence. Indeed most locals don’t even know how  to get there, but Comeenatrush is a gem, and visitors are astounded that it’s not better known. Essentially it is at the start of the Finnow river, bringing its water from the upland valley that is Gneeves. The water cascades over 100m down the multi level waterfall, before resting in the lake. The peace, tranquillity, and the sound of water are refreshing to the soul. 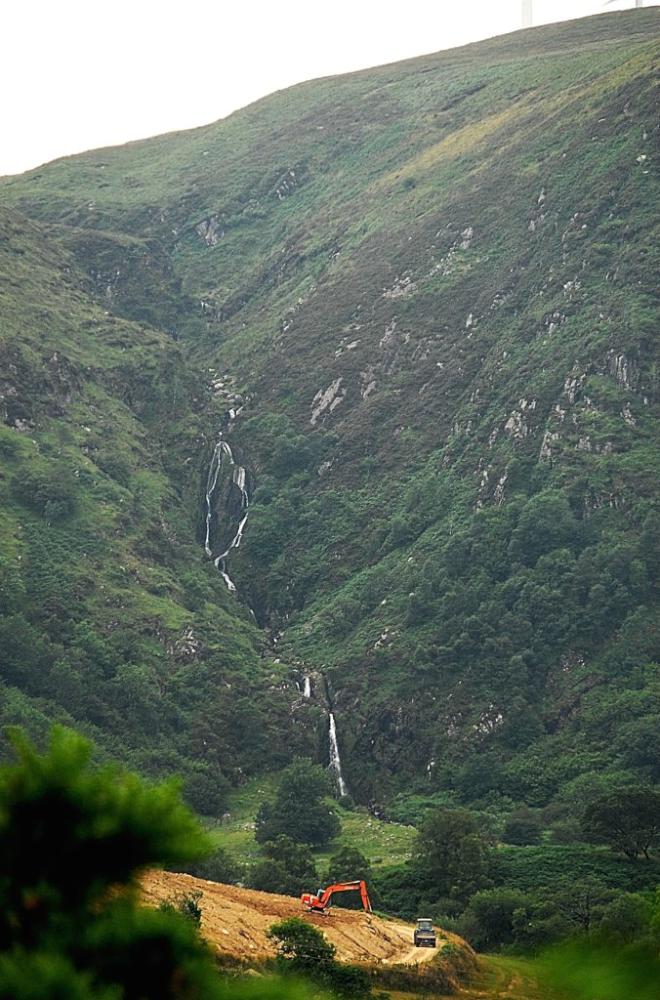 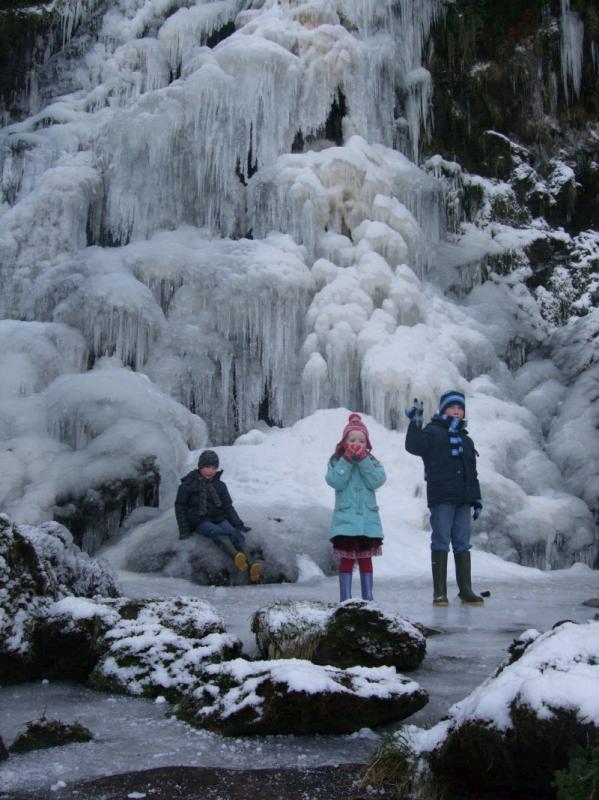 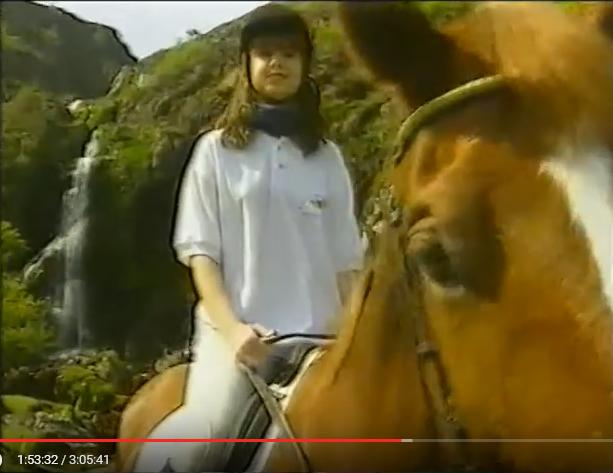 The waterfall featured in Eurovision 1993, as the Norwegian contestant Silje Vije travelled there on horseback

1. Starting from the Square in Millstreet, head south on the road to Macroom (R582) for 3.2 km
2. Turn right onto the L5224 after passing the turn off for Kilmeedy Castle and crossing the bridge over the River Finnow.
3. Continue for 350m, until the road forks. Keep left.
4. Continue for 1.5km, turn right down small the side road
5. Continue for 600m until you get to the old farmhouse & farmyard on the right side of the road.
.
6. [Change 2019] Do not enter by the house, but it’s best to drive or walk up past the house and park at the double gate on the right and walk through the field there and down to the farm passage that leads to the waterfall [Directions on Google Maps]

If you want to get to the lake and the bottom of the waterfall then follow these Directions on Google Maps. DO NOT follow the default  route from Millstreet to Comeenatrush on Google Maps, you will be landed on top of the hill at the entrance to Gneeves Windfarm. Many people make this mistake. BUT … It’s not really a bad thing though as if you make your way across 100m of bog, you are at the top of a cliff looking down on the lake and the view is spectacular. Sitting on the rock just down from the top of the cliff my favourite spot here, with the views and the sound of the water … but you need a head for heights, so it’s not for everyone. [route to the top of the cliff]

In 1992 when the the then owner Thade Mullane was re-landscaping the site, an Iron age Log Boat was discovered in the lake. Made from oak, it had been preserved by the acidic bog water.  It was dug out and researched by archaeologists from UCC and dated to 393 to 537, it is the earliest boat found on the Blackwater Valley. After inspections, it was re-submerged into the lake to preserve it. To find out more about the boat read our article HERE.

There is an Iron Age Logboat in the lake from about the 4th century. It was discovered in 1992, researched, and placed back in the lake to preserve it.

Tips: As with most waterfalls, it is always best to enjoy the waterfall after it has been raining heavily and there is lots of water flowing.

Local Legend: the golden gates of Kilmeedy Castle are reputed to have been thrown in Comeenatrush Lake!

Comeenatrush has a Wikipedia page in Cebuano (a language from the Phillipines), but none in English!

Many places online give the address as ‘Glantane’. This is incorrect. The lake is split by the townlands of Curragh and Gneeves. Glantane is at best two miles away.

In the 1880’s a man by the name of Daniel Dennehy was murdered nearby, and his remains dumped into the lake [TODO: complete article and link] 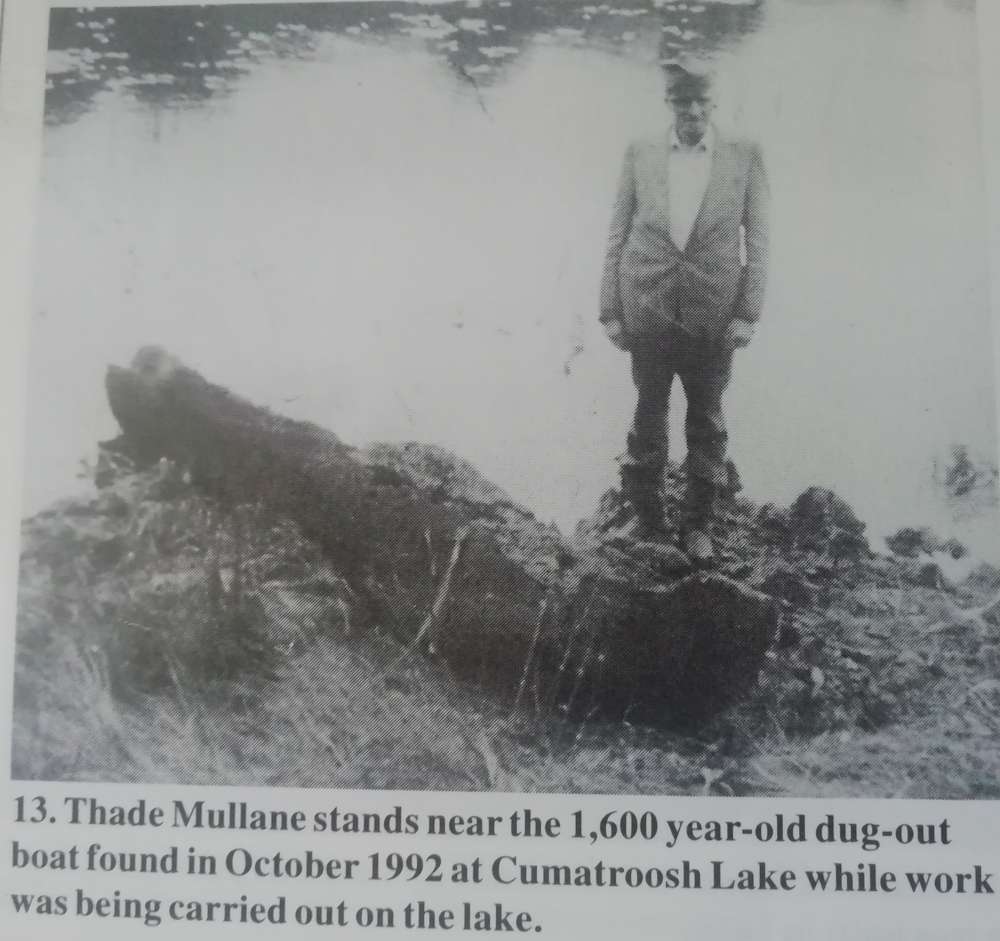 The logboat discovered at Comeenatrush, seen here after it was taken from the water. Thade Mullane who found the boat was the long time owner of the lands, and always welcomed people to see the lake, waterfall, and the boat. 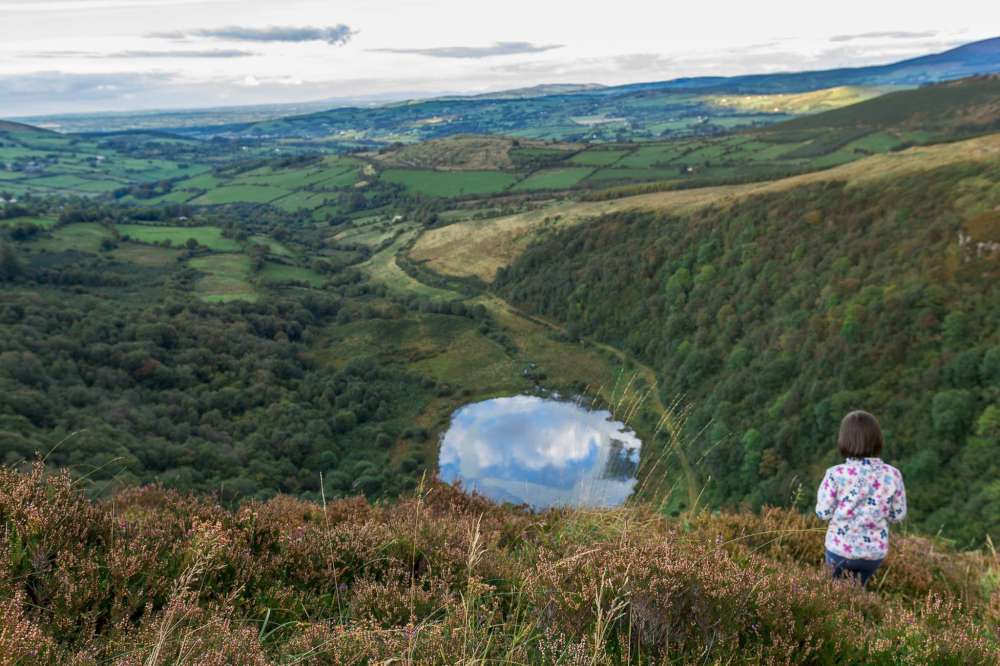 Update June 2019: is seems that the new owner of the land have planted the entire place with trees and the boat has been covered too (possibly destroyed) by the digging work 🙁
Different owners of the house and yard at the front have blocked access to the roadway. Its best to drive or walk up past the house and park at the double gate on the right and walk through the field there.