In the wind and rain of Easter Sunday just gone, Gerry White’s gave the speech at the Easter Commemoration at the Monument in the Square. With his permission, and the agreement of Millstreet Monument Committee, below is his speech so that those that were not there on the day can read it: 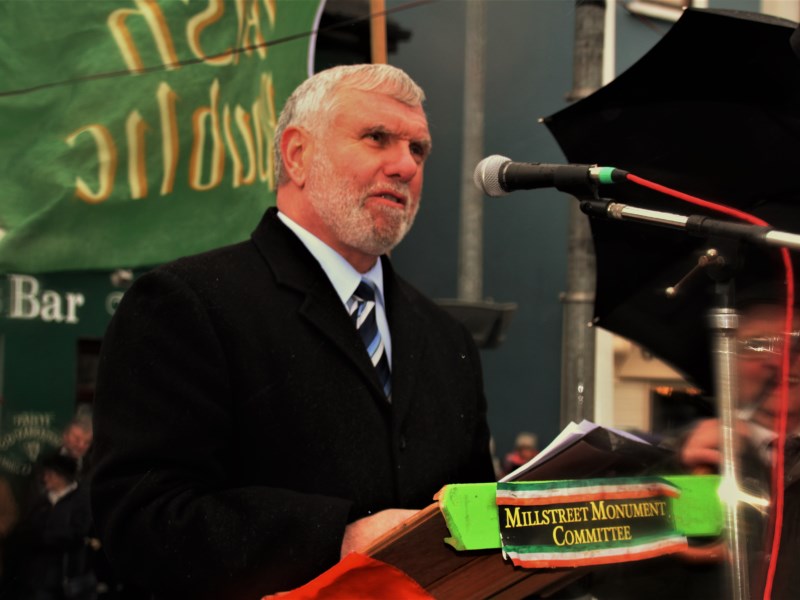 A Chairde,
My dear friends,

It is with great humility that I stand here before you today by this fine monument. I also stand here today as someone who is deeply conscious of the huge debt we owe those who came before us and the efforts and sacrifices they made to build the country we live in today. I also consider it a great privilege to be here and I want to thank the committee for giving me honour to address you.

This monument stands as a silent, solemn tribute to Millstreet’s patriot dead who lost their lives during Ireland’s fight for freedom. All of those men were members of Cork No. 4 Brigade of Óglaigh na Éireann, the Irish Republican Army. They were: Captain Patrick McCarthy of the 2nd Battalion and Captain Cornelius Murphy, Volunteer Michael Dineen, Volunteer Bernard Moynihan, and Volunteer Michael Twohig of the 1st Battalion. Today we remember them, their sacrifice and the loved ones they left behind.

The monument also records that on 1 November 1915, Terence MacSwiney, then Vice-Commandant of the Cork Brigade of the Irish Volunteers addressed a public meeting here in the town square. MacSwiney was a teacher, a playwright, a poet and a revolutionary and that day he told those present about the aims and objectives of the organisation. His words electrified the crowd and that same day companies of Volunteers were formed in Millstreet, Mushera, Keale and Rathduane.

In addition to recording the events of that fateful day in 1915 the monument also records that on Easter Sunday, 23 April 1916, those four companies assembled here in this square under the command of Commandant Con ‘Sonny’ Meany. Having assembled the Volunteers, Commandant Meany then marched them to O’Reilly’s Field in accordance with orders received from Brigade Headquarters in Cork. The Volunteers were supposed to take part in what was described as ‘Manoeuvres’. In reality, the men were to receive their allocation of the arms and ammunition that were to be landed by the Aud. Once they took possession of these they would take part in the armed uprising to establish an Irish Republic that was originally planned for Easter Sunday.

That fact the men from Millstreet didn’t take part in the Rising was no fault of theirs but was due to the series of conflicting orders that were issued from Volunteer Headquarters in Dublin in the days before Easter. However, it must be remembered that on Easter Sunday 1916 the Millstreet Volunteers who mobilised here were prepared to fight and die for an independent Irish Republic.

When I think about the men and events commemorated on this memorial one word springs to mind – and that word is ‘service’. All those commemorated on this memorial dedicated themselves to serving their country and its people. This act of service led to many hardships for them and their loved ones. And, as I have noted, five made the ultimate sacrifice.

When the Irish Volunteer companies were formed here in 1915 the men from this district and others like them would have drawn inspiration from the Volunteer Manifesto. That document, which was very radical for its time, stated that the main objective of the organisation was to ‘secure and maintain the rights and liberties common to all the people of Ireland’. Not just Catholic or Protestant, male or female, farmer or townsman, rich or poor, young or old – but ALL the people of Ireland regardless of class, creed, age or gender.

The words of the Volunteer Manifesto sustained the members of the organisation right up until the Easter Rising. After that day, however, the Volunteers and indeed many people of Ireland would have drawn inspiration from the noble words of the 1916 Proclamation that were read by Padraig Pearse outside the General Post Office in Dublin on the day the Rising began.

The Proclamation called upon Irishmen and Irishwomen to give their allegiance to the newly formed Irish Republic and stated that the Provisional Government would guarantee religious and civil liberty, equal rights and equal opportunities to all its citizen and declared the government’s resolve to pursue the happiness and prosperity of the whole nation and of all its parts and to cherish all of the children of the nation equally. The Proclamation then finished by calling upon the Irish nation prove itself worthy of the august destiny to which it was called.

Further inspiration was derived from the Declaration of Independence that was passed at the inaugural meeting of the 1st Dail on 21 January 1919. That stated that the Irish people would work to establish justice, provide for defence, insure peace at home and goodwill with all nations and constitute a national polity based upon the people’s will with equal right and equal opportunities for every citizen.

These documents, the Volunteer Manifsto, the 1916 Proclamation and the Declaration of Independence are the title deeds of the Irish Republic and the words they contain are as relevant today as when they were written.

Today, however, Ireland is a different place from what it was 100 years ago. Today, we have taken our rightful place among the community of nations. Today, our goods and produce are sought after and sold around the world and our musicians, authors and poets enthral and entertain people from many nations. Today the members of our Defence Forces, who, like the Irish Volunteers of Millstreet, proudly bear the title Óglaigh na Éireann, have a long record of humanitarian work and international peacekeeping that is respected the world over. President John F. Kennedy referred to the work of the Defence Forces when he addressed the Dail on 28 June 1963 declaring that ‘From Cork to the Congo, from Galway to the Gaza Strip, from this legislative assembly to the United Nations, Ireland is sending its most talented men to do the world’s most important work-the work of peace’. Sadly, securing that record has come with a price and to date eighty- six members of the Defence Forces have lost their lives while serving the noble cause of peace.

I have no doubt, that if they were with us today, the Volunteers from Millstreet who are remembered on this memorial would be proud of the achievements of their successors in the Defence Forces and also of the citizens of Ireland who have worked so hard to make it a peaceful and prosperous nation.

This situation is unacceptable!

There is no doubt in my mind that the people experiencing those difficulties would feel that the words and aspirations contained in the Volunteer Manifesto, the 1916 Proclamation and the Declaration of Independence do not apply to them. Equally, I am sure that the patriots of Millstreet who fought hard and sacrificed so much to establish an independent Irish Republic would not be happy with the situation I just mentioned.

The men of Millstreet who joined the Irish Volunteers in 1915, who mobilised here on Easter Sunday 1916 and all those men and women who went on to fight for an independent Irish Republic did so for one reason – because they dreamed of a better future for their country, their families and their friends.

Today, we too can dream of a better future. As we do so we can be inspired by the commitment and patriotism of those who went before us and the sacrifices they made so we can enjoy the freedoms we have today.

Thankfully, today Ireland is a nation at peace. However, while we are no longer called upon to fight for our independence, the challenges I just mentioned remain. As face those challenges it would be good for us to follow the example of service and sacrifice set by the patriots of Millstreet.

As we leave here today, let us carry the memory of those patriots in our heart and in our minds. And, as we remember those who went before us let us all, Irishmen and Irishwomen, vow to do our part to make a better future for those who come after us. As we do so let us look to the words that inspired the patriots of Millstreet one hundred years ago.

Let us all ensure that Ireland remains a country at peace of prosperity; let us cherish the values, culture and traditions that have been passed down to us; let us ensure that all our citizens will enjoy equal rights and equal opportunities and that all the children of the nation will be cherished equally. Today that is what we as a people are called to do to build a better future. In doing so we as a people will demonstrate to the world that, in the noble words of the 1916 Proclamation, Ireland is a nation that can prove itself worthy of the august destiny to which it is called. 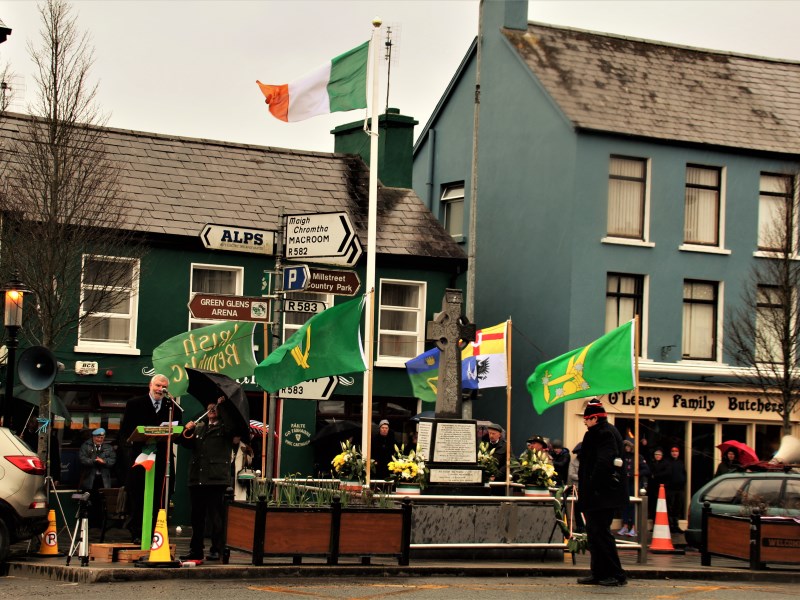 There are lots of pictures (66) and an overview  in Seán’s article: Wonderfully Colourful Easter Parade 2018 in Millstreet on Sunday