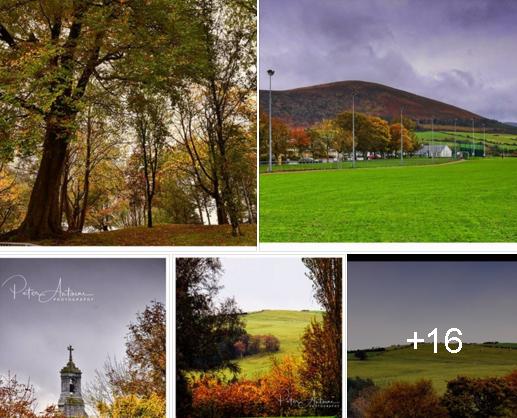 Autumn is flying, and winter will be coming soon. There have been some lovely bright days and not much wind, allowing people to get out and about. Tony took some stunning photos of Millstreet, showing up the lovely autumn colours. Click on the photo above to see the wonderful detail in each of his photos. In Pictures this week actually covers a few weeks, and is as varied as ever, from sport, to streetscapes, landscapes, visitors, animals, the Dairy Show, the Young Riders Show, and much more. See the photos below:

From the Grounds of Drishane

At the Young Riders

A huge thanks to @MunsterFire in Millstreet for the fab t shirts for the U15 North Cork Development Participants for 2017,Excellent service pic.twitter.com/n29k7YK19l

Congratulations to Sean Moynihan on winning the overall Driver of the @PlasticbagsS4RC 2017 Championship after Round 6 @Skibbdcc pic.twitter.com/BJSjIeTqNz

This is the crest of the Sisters of the Infant Jesus who ran a boarding school in Millstreet, Co. Cork

"This is the crest of the Sisters of the Infant Jesus who ran a boarding school in Millstreet, Co. Cork" https://t.co/q3oaGuzCJR pic.twitter.com/HMIdAcSQSK

James, Triona, Ann and Jerry O’ Leary at the Associated Craft Butchers of Ireland award ceremony held at The K Club recently where James and Jerry won the top prize in the Speciality Meats Competition.

We don’t see many of these Highland Cattle around Millstreet! Greg met these three lovely Highland cows last week.

A foggy morning Near the gates of the Country Park

Just some beautiful Autumn photos of Millstreet by Tony Broderick

Great time at the O’Connor and Kelleher Cups. Well done to all the players and thanks to all who supported.