The recent Cork 20 Rally produced mixed results for some of our local crews that made the short trip to Macroom which is now the new Home for the Rally to compete in what was a very tough and challenging Event, Saturdays stages were in the Kilmichael, Inchigeela and Kilnamartyra areas while the stages on Sunday were more Local to Millstreet with the Butter Road, Mushera and Mullaghanish stages all being used,the weather was sometimes very mixed particularly on the Saturday Morning loop and this made driving conditions quite challenging for all the Crews which as a result brought quite a few retirements along the way,from a Millstreet point of view there was a good battle in Class 10 with only just over 18 sec covering the top 3 Crews in the Class with Bandons Victor Beamish in an Vauxhall Nova topping the Class with our local crews filling the next 4 places with Denis O`Brien/Ryan O`Brien Opel Corsa finishing just 14.7 sec behind while 3rd in the Class were Kevin Hickey/Derry Healy Ford Escort Mark 1 a further 4 seconds back, rounding off the Top 5 in Class 10 were Sean Moylan/Denny O`Riordan in a Peugeot 306 who were followed home in 5th by Mike P Kelleher/Iarla McCarthy in there Mark 2 Escort,Sean Moynihan/Liam Brennan in another Mark 2 Escort took 3rd in Class 12 and as a result are Class 12 Champions in both the Irish Tarmac Championship and also in the Southern 4 Rally Championship as well in what has been a remarkable year for the talented Young Man from Millstreet,Todd Falvey/Andrew Cronin in there Porsche 911 were 3rd overall in the Historic Section and finished first in Class C1 while John Murphy/ Eoghan McCarthy finished 5th in Class 20 with there Subaru Impreza,unfortunately there was no luck for Dan Kelleher/Gavin Downey Ford Escort Mark 2,Denis Buckley/Declan Casey Ford Escort Mark 2 and John O`Sullivan/Derry Long Ford Fiesta who all failed to finish what was a very tough Rally.The Event was won by Sam Moffett in his Ford Fiesta who by just starting the Rally finished off a remarkable year by winning the Irish Tarmac Championship to add to his National Tarmac and Forestry Titles he already has under his belt as well from the 2017 Season, while Josh Moffett Ford Fiesta crashed out on the last stage while fighting for the lead with his older Brother which left Alastair Fisher in his Fiesta finishing in the runner up spot while Kevin Eves co-driven by Macroom Man William Lynch won the National Rally in his Toyota Corolla and also the Tarmac Championship Title in the National Section as well in the process,Keith McIvor won the Historic section in his Ford Escort while Jenna McCann was the top Junior Competitor and as a result clinched the Junior Tarmac Championship in Cork,Munster Motor Club led by Paul Browne and his hard working Team laid on a very challenging Route with top class stages used that provided tough driving conditions which were enjoyed by both Competitors and Spectators alike,out of the 104 Crews listed to start the Event 63 Crews made it back to the finish on Sunday Evening in Macroom. 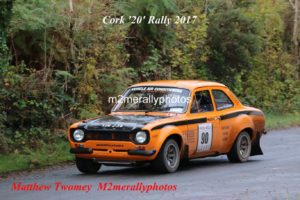 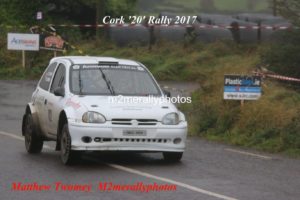 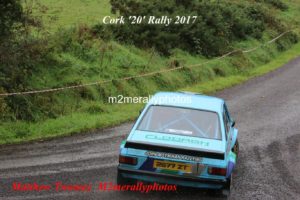